How Fast is your Honey? 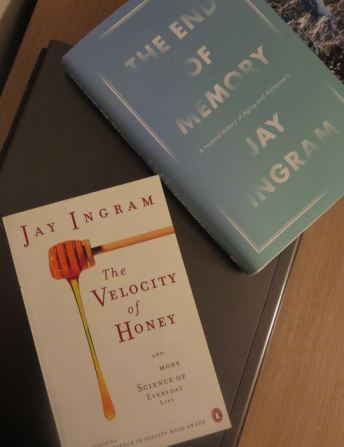 Honey has velocity. But you knew that, didn’t you?

We don’t usually think of honey in terms of speed. One of the coolest things about beekeeping is that the craft encourages the crafty to learn about everything. Honey, pollination, wax, social behaviour of insects, ecology, and much more is there for the amateur to discover and experiment upon. I’ll tell you how fast honey moves in a moment. But first, a hint – it’s not slower than molasses in January.

I just returned from the Science Writer’s Conference in Saskatoon. The author of The Velocity of Honey, Jay Ingram, was everywhere at the meeting. He is a hard-working guy. You may remember Jay from Discovery Channel’s Daily Planet (a science-news TV program). He was the host for 15 years, until 2011. If you are old as I am, you may also remember that Jay Ingram first burst upon the national scene with the CBC’s weekly science radio broadcast, Quirks and Quarks, in 1979. These days, you may have a chance to catch Jay giving a lecture – don’t pass up such an opportunity.

Although Jay Ingram is a whiz at explaining every type of science – from physics and chemistry to the latest medical breakthroughs – he was in Saskatoon at the writer’s conference to help attendees become better science communicators. He also introduced his new book, The End of Memory: A Natural History of Aging and Alzheimer’s. The Alzheimer’s lecture had great imagery of plaques and tangles and fascinating stories such as the case of nuns led by Sister Mary (It’s all in his book.) The next day Jay spoke of the art of science story-telling and he held a workshop. Among other details, we were reminded to write at a conversational level when writing for a general audience. (Am I doing OK with that?) Jay Ingram stayed the length of the conference, spending a lot of his time with science students. Even on Sunday morning when most of us were boarding planes and automobiles, he was in a session with those young men and women, instilling valuable writing tips and fostering skills that sharpen science reporting.

Jay Ingram and the art of
science communication.

So, what is the velocity of honey? Usually pretty slow. But it will catch up with falling stars if dropped from a high enough altitude. For a more detailed answer, I’ll refer you to Jay Ingram’s book, The Velocity of Honey And More Science of Everyday Life, a collection of science essays covering topics from spinning coins and skipping stones to math-literate animals and dripping honey.

Until you have a chance to read it, here is something to experiment with, and it comes from Jay’s book. Honey is more viscous than water, so it flows more slowly. You could place a piece of toast on a plate and slowly pour a stream of water on the toast. Great, you’ve ruined your toast. But in the meanwhile, you might have noticed that the water didn’t pile up on the toast. Instead, it raced off in all directions and sort of randomly flooded the plate and floor. Now get a new piece of toast. Drip some liquid honey on the toast. If your honey spoon is close to the toast, you may have a slow moving stream that bulges upwards toward the spoon. Slowly elevate the spoon and the stream narrows as the velocity of honey increases. Pay attention to the type of bulge you are now creating on your toast. Depending on the dispenser, you may find a ribbon that wobbles back and forth or perhaps a circle that loops around and around. Experiment with height, which increases the velocity of the honey as you make it fall from a higher position. There are some pretty cool things going on but you would never see them if you used water instead of viscous honey. You get more interesting effects with honey. And much better toast.

Ron Miksha is a bee ecologist working at the University of Calgary. He is also a geophysicist and does a bit of science writing and blogging. Ron has worked as a radio broadcaster, a beekeeper, and Earth scientist. (Ask him about seismic waves.) He's based in Calgary, Alberta, Canada.
View all posts by Ron Miksha →
This entry was posted in Books, Science and tagged Jay Ingram, viscosity. Bookmark the permalink.

2 Responses to How Fast is your Honey?