My last two blog posts (Alberta is Beekeeping and Canada’s Hive Beetles) were unseemly braggadocious pitches. I wrote about how great beekeeping is on Canada’s western  prairies. Alberta, Canada, has not had CCD, but instead has increasing numbers of kept bee colonies (twice what it had in 1987, and still growing), and has production that averages around 150 pounds per hive. Winter losses have been around 10%.  In my writing, I may have implied that Alberta beekeepers are universally hard-working, intelligent, god-like souls who create peppermint-scented gas after heavy meals. Granted, that perfectly describes most of us. But I should lay due credit and burnt offerings before the altar of the well-designed western prairies. Good beekeeping is a function of good location more than anything else.

One of our more scenic yards, south of Calgary, in sight of the Rockies and amid alfalfa

Alberta, a western-Canada province with 4 million people and 300,000 colonies of bees, has millions of acres of canola, alfalfa, and sweet clover. All three of these honey plants do well on Alberta’s sun-drenched alkali soils. They secrete millions of tonnes of water-white nectar, of which honey bees gather a small percentage. Alberta beekeepers produced about 43 million pounds of honey in 2015.

The western prairies is a good honey place. It’s easier to be a good beekeeper when you have money from honey and can do all the best things that your bees demand – replacing older brood comb each year, requeening regularly, managing pests intelligently. In some parts of the world, beekeepers struggle to produce a crop and lack money to give their bees the time and resources they need. In Britain, for example, a colony of bees averages 30 pounds of honey a year. (A few years ago, the average was 8 pounds per hive in the isles.) You have to really, really love beekeeping to continue with bees when things are that bad. (And most British beekeepers really, really love beekeeping.) It is almost impossible to sustain a commercial business with small crops – unless you are raising queens or doing pollination. 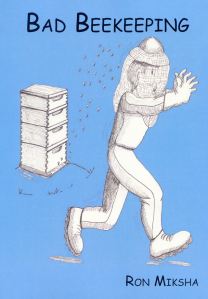 Ten years ago, I published a book called Bad Beekeeping. It’s a memoir about running a small commercial honey farm. I titled it Bad Beekeeping because I had met a Canadian beekeeper who was making enormous (200-pound) honey crops and he asked me why American beekeepers average just 60 pounds a year. I explained about the lack of good forage, cool wet summers, poor soils, weak honey flows, focus on pollination instead of honey production, and so on. When I finished, the gentleman said, “No, Ron. I’ll tell you what it is. It’s bad beekeeping. They could make big crops, too, if they were better beekeepers.” The fellow who made the remark was a good beekeeper but he was also living in a place where 200-pound honey crops are possible. Our tendency to take credit for success due largely to lucky birth and lucky circumstances is tiring and unfounded. But it’s nearly universal. Sometimes it’s useful to give credit where it’s due.

Location, location, location is the oldest adage in real estate and lemonade-stand positioning. It’s certainly true in beekeeping. Just as it’s hard to be a deep-water fisherman if you are from Rugby, North Dakota (North America’s geographic centre) and it’s hard to learn to tame alligators in Kivalliq, Nunavut, our location influences our vocation. Western Canada’s beekeepers owe a huge debt to continental drift and mountain-building which combined to give us our perfect latitude and rich soils. Sure, we are god-like in our beekeeping skills, but it helps that in western Canada, the sun is shining on some fabulous fields of nectar.

Ron Miksha is a bee ecologist working at the University of Calgary. He is also a geophysicist and does a bit of science writing and blogging. Ron has worked as a radio broadcaster, a beekeeper, and Earth scientist. (Ask him about seismic waves.) He's based in Calgary, Alberta, Canada.
View all posts by Ron Miksha →
This entry was posted in Beekeeping, Commercial Beekeeping, Honey, Honey Plants and tagged Alberta, Bad Beekeeping, bee locations. Bookmark the permalink.