Bee Rustlers on the Rise

In the old days, cowboys occasionally stole cows. Horse thieves were sometimes hanged. Not always, though. Back in Val Marie, Saskatchewan, a cattle town that I lived in for ten years, there was a fellow named Joseph Ernest Nephtali Dufault who showed up from Quebec in 1910. He worked for local ranchers for three years, then was chased off, accused of horse theft.

Getting chased out of Val Marie turned out to be a good thing for Mr Dufault. He headed south, and though he stole horses again (in Nevada), got caught, and spent time in prison, he finally straightened out and did OK. He ended up writing books about the old west. In California, he wrote screenplays. By then, he’d changed his name to Will James and had sold 23 books – 5 became movies. Here you can watch his most famous work, Smoky the Cowhorse, adapted into a 1946 film, starring Fred MacMurray, Anne Baxter, and Burl Ives. Thirty-six minutes into the film, you get to see Smoky hoofing the ground.

Not every horse thief becomes rich and famous. Must just get caught and live a life in shambles. Or they briefly occupy a noose. Bee thieves also have their problems. When I kept bees in Florida, a ring of bee bandits were maundering apiaries at night, stealing hives, taking them home, killing the bees, extracting the honey, melting the wax, and burning the equipment. By morning the evidence was gone. The crooks allegedly used the cash to feed a cocaine habit.

I’ve never had any hives stolen. But I’ve heard of bee thefts, even up here in neighbourly Canada. Today’s news tells the story of a Quebec beekeeper who has had 184 hives go missing.  The newspapers report it as a $200,000 theft. I don’t want to argue the number, but that’s over a thousand dollars a hive. The bee company’s president calculates the loss this way: “It’s a big loss because first you lose the [blueberry] pollination in Lac St. Jean, you lose the pollination for the cranberries, then you lose the honey crop, and you have to build new hives. It’s costly. It’s a loss of a few hundred thousand dollars,” he said.

It’s the biggest bee theft I’ve ever heard of and it’s a tough time of the year to lose bees. Replacement packages can’t be found this late in the season. Pollination contracts have to be filled. This is a really bad situation for the beekeeper.

The police are looking for 5 million missing Quebec honey bees. We presume that the colonies have not been killed, combs melted down to supply a bee rustler with drug money. Instead, the brand burned into the wooden bee hive equipment should alert investigators of the bees’ rightful owners. Hopefully the beekeeping family will get their stolen property back. 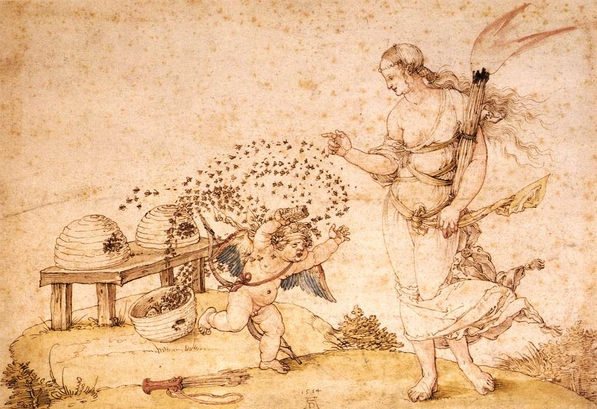 Update: The Mounties always get their men. Two brothers have been arrested for the alleged Quebec bee theft:

Ron Miksha is a bee ecologist working at the University of Calgary. He is also a geophysicist and does a bit of science writing and blogging. Ron has worked as a radio broadcaster, a beekeeper, and Earth scientist. (Ask him about seismic waves.) He's based in Calgary, Alberta, Canada.
View all posts by Ron Miksha →
This entry was posted in Commercial Beekeeping, Movies, People, Strange, Odd Stuff and tagged bee theft, Drurer, Quebec, Val Marie, Will James. Bookmark the permalink.

2 Responses to Bee Rustlers on the Rise