Dr. Preston Pouteaux told the radio audience that he became involved in the certification process to raise awareness about the plight of bees. He became interested in bees because he was burned out and he apparently needed some soul comfort (though he didn’t say it quite that way) which he found inside a beehive. He was weary, Dr. Preston Pouteaux explained, partly because of his many years of study. Indeed.  He put quite a few semesters into his education, attending 5 colleges: Covenant College, Briercrest College and Seminary, Regent College (a graduate school of Christian theology), Jerusalem University College, and Tyndale Seminary. After cycling through these Bible schools,  Dr. Preston Pouteaux ended up with his doctorate, likely in something Bible-related.  Today, Dr. Pouteaux is a pastor at Lake Ridge Community Church in Chestermere and he describes himself as “a bumbling backyard beekeeper” with two hives of bees. 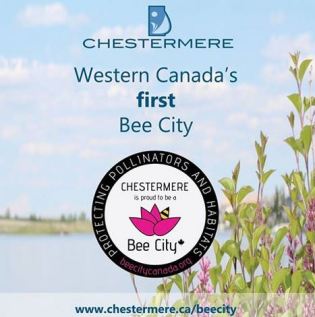 It is remarkable that Dr. Pouteaux, a hobby beekeeper with just three years experience, was able to get the community of Chestermere certified as a Bee City. It must have taken a lot of work, especially in his dynamic community. Chestermere has an interesting history. I remember it as a farming village in the 1980s, scattered around an irrigation lake built upon a swamp. From 4,000 people in 2001 to 10,000 in 2006, to 20,000 in 2016, it’s one of Canada’s fastest growing towns. Growth like this, of course, consumes a lot of land that used to be home to a lot of birds and bees.

If groups like Bee City raise awareness of lost bee habitat and try to mitigate the natural disaster caused by runaway population growth, then they are definitely doing an ecological service. Bee City began in the USA in June 2012 when a group within the North Carolina State Beekeepers Association formed Bee City USA and the city of Asheville became certified as America’s first bee city. The project spread across the states and now into Canada.

To become certified by Bee City Canada, a 6-page application is submitted to some Bee City auditors somewhere who assess the applicant city. Applicants need city council approval to proceed and are bound by a set of resolutions and procedures that include

1) establishing a liaison with local government and a facilitator organization;

3) and meeting specific measurable targets of hectares set aside for native pollinators;

5) showcasing “the municipality’s commitment to enhancing native pollinator health through biodiversity and habitat”.

6) documenting all this for annual renewal of the certification.

Of these, having an annual pollinator festival in late June would be the easiest to pull off. But meeting specific measurable targets of hectares set aside in a fast-growing community will be very challenging.

In almost all respects, this pollination certification system is laudable. However, as I researched the Bee City mandate, I found an issue which causes a bit of anxiety for me.  There is a strong emphasis on native plants as sources for native bees’ sup.

This is an initiative about pollinating insects, not honey bees: for example, on the Bee City Canada website, honey bees are never mentioned. Instead, we are told “1 in 3 bites of food we eat is courtesy of insect pollination”. The fact that 95% of those pollinating insects that feed us are honey bees is missed. Projects like Bee City – espousing native plants and native bees – could be hijacked into an anti-honey bee movement. If you’ve forgotten, honey bees are not native to North America. Or South America. Or Australia, New Zealand, India, China, and a whole bunch of places that depend on honey bees for crop pollination and where a whole bunch of people who love ecology, nature, outdoor activities, and communion with buzzers have been keeping honey bees.

Regular readers of this blog may know that I’ve sparred off and on with a brilliant bee research scientist who works at the University of Calgary. Dr Ralph Cartar says this about urban beekeepers: “It is not as rosy as they think. Every joule of honey that they get on their plate or in their jars is a joule that has been robbed from native bees” and urban beekeepers “swamp the world with bees and the competition becomes intense and you risk losing those native pollinators.”

Perhaps the saving grace for the Bee City mandates which are popping up around the country will be that the very people who bring the project to their towns – hobby beekeepers such as Dr. Preston Pouteaux – like honey bees.  As long as the pastor finds solace and sanity in the depths of his hives’ brood chambers, he (and others like him) are unlikely to allow the Bee City movement to turn into an eviction of honey bees from designated bee cities – even if that violates a Bee City resolution.

Ron Miksha is a bee ecologist working at the University of Calgary. He is also a geophysicist and does a bit of science writing and blogging. Ron has worked as a radio broadcaster, a beekeeper, and Earth scientist. (Ask him about seismic waves.) He's based in Calgary, Alberta, Canada. Ron has written two books, dozens of magazine and journal articles, and complements his first book, Bad Beekeeping, with the blog at badbeekeepingblog.com. Ron wrote his most recent book, The Mountain Mystery, for everyone who has looked at a mountain and wondered what miracles of nature set it upon the landscape. For more about Ron, including some cool pictures taken when he was a teenager, please check Ron's site: miksha.com.
View all posts by Ron Miksha →
This entry was posted in Ecology, Outreach, Save the Bees and tagged Alberta, Bee City, Chestermere, Native Bees, pollinators, Ralph Cartar. Bookmark the permalink.

6 Responses to Should a “Bee City” Ban Honey Bees?