Well, this is weird. The video at the end of this link is great, but the whole concept is weird. It’s an artificial, synthetic apiary. I’ll rank it with the Flow(TM)Hive for a reason that will become apparent in a moment. But the weird concept we’re looking at is an artificial indoor living space for frolicking honey bees.

Most beekeepers like the natural touch of wood, the taste of honey, the buzzing in the ears, and the sticky wax on the fingers. I guess that’s one of the many reasons that I’m against the dreadful honey-on-tap hive. The Flow(TM)Hive is perfect for an artificial plastic world – a turn-the-tap and here’s-your-honey mentality. Well, the synthetic apiary I’m about to review should be filled with flow hives. And then forgotten. 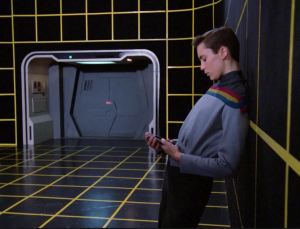 “Computer,” demands Captain Picard, “make me an apiary.” And this is what he gets: a weird white world of perpetual spring where bees have an unending supply of sugar water and fake pollen. You see, Jean Luc Picard forgot to order trees and grass and flowers and stuff. 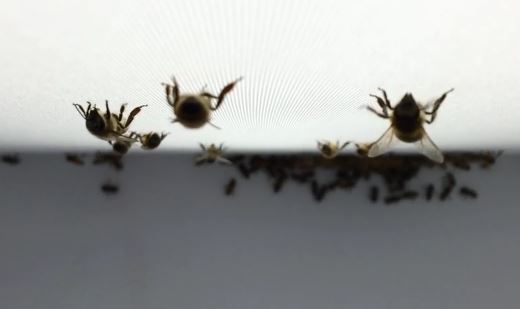 Regular readers of this blog know that I rant against silliness whenever I find it, yet I’ve got a soft spot for technology and design. As Neri Oxman says, the synthetic apiary is just a ‘proof of concept’ – investigating whether bees can be kept alive in an artificial environment. I understand the design experiment. It’s interesting and laudable. But weird, from a beekeeper’s perspective.

Proof of concept was established long ago when commercial beekeepers (including some of my friends) began parking tens of thousands of colonies in huge wintering warehouses where temperature, light and humidity are controlled.  Bees can survive in an artificial space, we already know that. To me, the synthetic apiary looks too much like a dystopian future – some warlord has captured two hives and two beekeepers and has put them in his man cave while just outside his walls, Paris has been incinerated in a nuclear war. Or something.

The article about the Synthetic Apiary (“to combat honeybee colony loss”) duly notes that seven (of the world’s 22,000) bee species have been placed on the endangered species list and this experiment points the way to combat honey bee colony loss. Fortunately, honey bees are actually increasing in number, though some other species are, in fact, threatened. Had the designers done their homework, they may have chosen one of the threatened bee species, a nice bumblebee, for example, but that’s another issue.

In a practical sense, the synthetic apiary fails on many fronts: Bees will survive a few months on concoctions of sugar syrup and substitute pollen, but they need a natural variety of amino acids and minerals to actually thrive. They need propolis and floral pollen. They need a ceiling 100 metres high and a

2-kilometre hallway if drone and queen will mate, or they’ll die after the old queen dies. They need an artificial sun that travels across the sky, otherwise, the bees will be attracted to artificial lights and won’t return to their hive. They need flowery meadows, fresh water, open skies. They need a better holodeck.

Anyway, I hope that you will check out the video and the story. I honestly liked the film. The photography is brilliant – even if the entire concept is, well, a bit weird.  And knowing that the bees won’t survive like this, it all becomes macabre.

Ron Miksha is a bee ecologist working at the University of Calgary. He is also a geophysicist and does a bit of science writing and blogging. Ron has worked as a radio broadcaster, a beekeeper, and Earth scientist. (Ask him about seismic waves.) He's based in Calgary, Alberta, Canada. Ron has written two books, dozens of magazine and journal articles, and complements his first book, Bad Beekeeping, with the blog at badbeekeepingblog.com. Ron wrote his most recent book, The Mountain Mystery, for everyone who has looked at a mountain and wondered what miracles of nature set it upon the landscape. For more about Ron, including some cool pictures taken when he was a teenager, please check Ron's site: miksha.com.
View all posts by Ron Miksha →
This entry was posted in Bee Yards, Culture, or lack thereof, Save the Bees, Strange, Odd Stuff, Tools and Gadgets and tagged bee extinction, Synthetic Apiary. Bookmark the permalink.

1 Response to The Synthetic Apiary