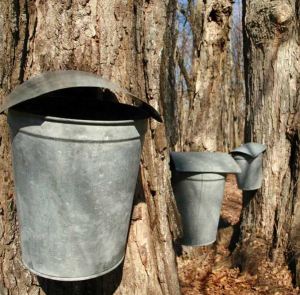 I live in western Canada (no maple syrup trees here on the windy prairies) so I don’t think a lot about the sugar tapping going on at the moment in the east. But maple syruplers (sur-PLERS) are the honeyman’s kindreds so I occasionally follow the maple news.

Most people know how the craft works. A sugar shack owner leases maple trees, drills some boreholes and then nails cans on the unlucky trees. Syrup bleeds, draining into buckets. It’s water with 2% sucrose.  In the sugar shack, a sugarman boils and thickens the thin syrup. Here’s a short tapping video, just in case you’ve never seen it done:

As days grow longer and temperatures become warmer, a sugar tree’s sap rises.  The tree awakens from its wintry stupor and prepares its blossoms and leaves. Sugar sap is like a cup of morning coffee. It’s a jolt of energy which the tree made the previous season and stored safely below ground, then used in the spring.

A lot of trees store sap below the frost line, then pump it upwards in late winter to give a burst of growth. In fact, here’s a list of 22 trees that can be tapped for syrup.  Sugar maples give the biggest volume. With a 2% sucrose concentration, it’s also the sweetest syrup. As a kid growing up in Pennsylvania, I snuck a taste from buckets dangling among sugar maples on property our family owned.  I was not impressed. A few Februaries later, I ventured inside a sugar shack and watched as 40 gallons (taken from two nearby trees) was condensed into one sweet gallon. That tasted much better.

Honey is healthier than maple syrup. Maple syrup is pure and natural sap, boiled and caramelized in a sugar shack. It is pure plant sugar, so it’s almost 100% sucrose. When plants create sugar, it is always sucrose. Sucrose is the sugar we get from cane and beets – it’s table sugar.  Sometimes sucrose is reduced by natural enzymes into simpler, healthier forms. When we eat sucrose (table sugar), our bodies’ enzymes break sucrose into simpler monosacchrides. In honey, flowers and bees add the enzymes, turning nectar into healthy honey. Maple syrup is 97% sucrose; honey is 2% sucrose. 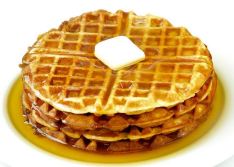 Vegans avoid honey but advocate maple syrup. That’s wrong. If beekeeping is done correctly, it doesn’t hurt bees; however, stolen tree sap makes a difference to the health, growth, and blossoming of maple trees – so tapping ultimately hurts foraging insects. Although maple syrup soaks the breakfast which my daughter and I make Sunday mornings, I wonder about the harm people are doing by tapping millions of trees. Are we depriving bees of some of the early nectar they might get if the sap made it up to the tree tops instead of ending up on my breakfast?

The people who make and sell maple syrup say that very little tree damage is done and they are probably both correct and biased.  I found this PDF from The Journal of Northeast Agriculture. It describes the (‘slight’) damage done by a taphole bored through bark, beyond the thin vascular cambium and then into the fibrous vessel cells that transport water, nutrients, and sugar to the tree’s stems and leaves. Although it might not be painful for the maple tree, harvesters are told to give a tree a break for a year if it looks distressed and to poke new holes in spots far away from the previous year’s tapholes so that the tree’s wounds have a chance to heal.  At one website, I read that trees may be tapped for 40 years without being killed. Somehow that seemed less reassuring to me than if the writer had not mentioned it at all.

The dark business of syrup

Beyond the (minimal) environmental degradation inflicted by tapping the lifeblood out of Canada’s cherished symbolic flag-leaf tree, there is an unseemly dark business in the maple syrup industry. About 50 years ago, maple syruplers in Quebec formed a syrupler’s cartel.  A libertarian may argue that producers should be allowed to join together and set prices. For tree folks it has worked nicely – the price of maple syrup has been good for tappers. Almost all of the world’s maple syrup comes from Quebec and the Federation of Quebec Maple Syrup Producer’s 7,400 members. Supported by the provincial government, it’s illegal for non-members to tap trees and market their own stuff. This has effectively created a monopoly which Sunday morning pancakes have subsidized for years. It also wrecks the lives of small sideliners who would like to earn a few dollars tapping. It’s turned them into black market entrepreneurs, until they get caught and busted.  Here’s their story in a short video:

But wait! There’s more. The Federation of Quebec Maple Syrup Producers has been so successful controlling the sale of 77% of the world’s maple syrup that the price has hit $1,300 per barrel.  That’s 25 times the cost of a drum of oil and a bit more than a barrel of honey (which, by the way, is healthier and is not controlled by a quota-setting cartel).  The Federation du Dark Syrup keeps the price high by keeping millions of pounds of maple syrup drummed up in steel barrels and stacked in huge warehouses where it is sold for a price set by the federation. In storage, the stuff is referred to as the International Strategic Reserve, or the Global Strategic Maple Syrup Reserve. The federation is operated as a government-sanctioned cartel to control global maple syrup prices and supply, and was called “the OPEC of the maple syrup world” by the Economist in 2013.

Drums of maple syrup (or air?) – part of the Global Strategic Reserve.

You might worry that millions of pounds of expensive sweetener stored in a few big buildings in Quebec villages might become a target for theft and fraud.  It was.  In 2012,  $13 million dollars of maple syrup (six million pounds) was stolen from the strategic reserve. Regulators who dropped by regularly to count the barrels didn’t notice that half of the strategic reserve was missing because maple syrup barrels had been replaced by barrels of air.  An intrepid inspector climbed a stack of drums to count them and one empty drum fell. It should have weighed 620 pounds and been steady as a rock. Police were called and thousands of empty barrels were discovered.  (The ultimate imitation maple syrup.) Eventually about 30 people were arrested and most of the Global Strategic Reserve was recovered.

PostScript: April 28, 2017.  A couple of months have passed since I wrote the piece above.   Sweet justice has been served – today, I heard that one of the key players in the maple syrup heist has been sentenced to 8 years in prison and a 9.8 million dollar fine.  If he doesn’t pay back the money, he gets another 4 years in the pen.

Ron Miksha is a bee ecologist working at the University of Calgary. He is also a geophysicist and does a bit of science writing and blogging. Ron has worked as a radio broadcaster, a beekeeper, and Earth scientist. (Ask him about seismic waves.) He's based in Calgary, Alberta, Canada. Ron has written two books, dozens of magazine and journal articles, and complements his first book, Bad Beekeeping, with the blog at badbeekeepingblog.com. Ron wrote his most recent book, The Mountain Mystery, for everyone who has looked at a mountain and wondered what miracles of nature set it upon the landscape. For more about Ron, including some cool pictures taken when he was a teenager, please check Ron's site: miksha.com.
View all posts by Ron Miksha →
This entry was posted in Honey, Strange, Odd Stuff and tagged honey, maple, maple syrup, Quebec, sucrose. Bookmark the permalink.

13 Responses to Maple Syrup is Dark