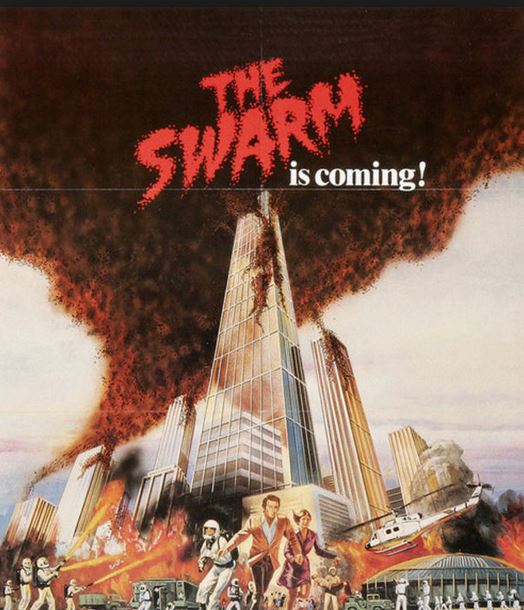 It’s swarm season here in the north. That will end soon enough, but right now it’s pushed by long days and a heavy dandelion flow. Hives just can’t help themselves. In the old days of skep and gum beekeeping, a whole family would run outside, banging pots and pans and shouting, “Yippee! The bees are swarming!” It meant that they’d have new bees to replace some of the colonies that had died over winter.  Fast-forward two hundred years or so and it’s not the same. “Craps! The bees are swarming!” But swarms are still cool – even if they might point out your beekeeping missteps and represent a probable loss of money.

Today, I’ve got a swarm photo essay. Most of the pictures are mine, but some are vintage images from many, many years ago.

Almost 500 years separate these two images. (Left, 1500s, woodcut by Jan Van der Straet in Flanders; right, 1980, photo by me in Florida)  Not much has really changed: both beekeepers are climbing ladders, wearing veils, holding a tool.  On the right is my brother David, propped against his honey house. On the left are some folks whom I’ve never met, but their honey house is also near them.

How do you carry your swarms to your bee yard? This guy had a cool solution. From Gleanings, early last century.

This is the first picture I ever uploaded to the internet, way back in the early 1990s. About two years later, I did a search for ‘swarms’ and found my own picture on a USDA website. It still had its original file name, SWARM_M.jpg, but no reference to Pennsylvania (where I snapped this with an SLR Minolta). By the way, in those days we had to keep file names under 8 characters. How do I feel about the American government pilfering my photo and offering it to the world? I’m cool with it. This time.

Here’s my final picture for today. This was sent to me by my friend Ursula, who manages Medivet. Medivet makes the world’s supply of Fumagillin-B, the anti-nosema medicine. Ursula met this swarm on a golf course in southern California, near the Arizona border. It’s undoubtedly populated by Africanized Honey Bees. It looks like the swarm was once much bigger but might have been going through a dearth when the picture was taken. At one time, all those (now) dry combs must have held a lot of honey. 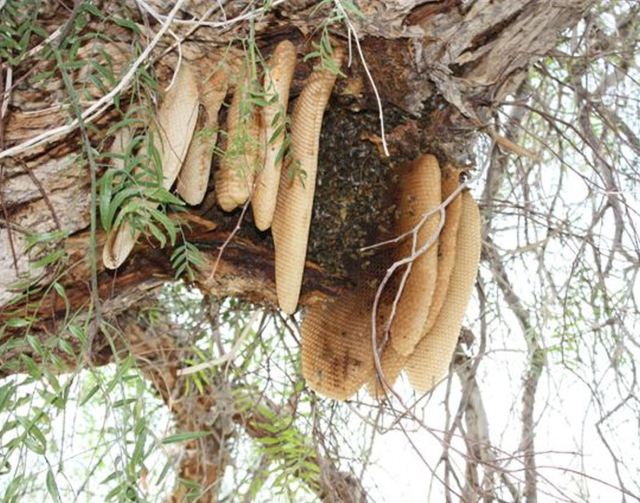 Ron Miksha is a bee ecologist working at the University of Calgary. He is also a geophysicist and does a bit of science writing and blogging. Ron has worked as a radio broadcaster, a beekeeper, and Earth scientist. (Ask him about seismic waves.) He's based in Calgary, Alberta, Canada. Ron has written two books, dozens of magazine and journal articles, and complements his first book, Bad Beekeeping, with the blog at badbeekeepingblog.com. Ron wrote his most recent book, The Mountain Mystery, for everyone who has looked at a mountain and wondered what miracles of nature set it upon the landscape. For more about Ron, including some cool pictures taken when he was a teenager, please check Ron's site: miksha.com.
View all posts by Ron Miksha →
This entry was posted in Beekeeping, Friends, History, Swarms and tagged beekeeping, California, Pennsylvania, Swarms. Bookmark the permalink.