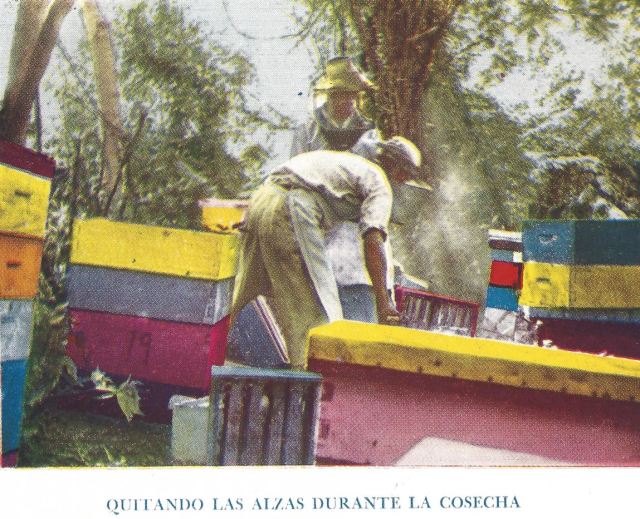 One of the world’s largest honey farms was a Mexican outfit started by a couple of guys on holidays from Germany. The Second World War broke out while they were rambling around the Mexican coast, so they stayed for an extended vacation. That vacation turned out to be the rest of their long lives.

Miel Carlota was began as a hobby when the two friends, Arturo Wulfrath and Dr Juan Speck, picked up five hives from a farmer. Apparently looking for an interesting way to make a living and contribute to their new country, they became beekeepers. According to their company representatives at Miel Carlota, it all started on this day (June 5th) in 1943 when those five hives came into their possession.

They were incredibly progressive beekeepers. Their part of Mexico historically produced 15 kilos (35 pounds) of honey per hive when the young men arrived. Their first hives were in rustic boxes. These were hard to manage and contributed to Mexico’s low honey production. They transferred the bees to modern Langstroth-style equipment and learned to move hives to seasonal blossoms.  By 1958, Miel Carlota, headquartered in Cuernavaca, operated at least 20,000 hives of honey bees. According to a Waco Tribune-Herald reporter who interviewed Dr Speck, the business produced six million pounds of honey a year. This would be a yield of 300 pounds per colony, which is unlikely, but not impossible. (Bee colonies typically produce between 50 and 250 pounds annually.) Speck indicated to the Waco paper (January 26, 1958) that they operated 318 apiaries. Elsewhere, Miel Carlota indicated they had about 100 hives per apiary, which would imply over 30,000 hives. Others have stated that the company had 50,000 colonies during the 1960s. The fuzziness around the numbers may be due to seasonal variations and whether or not their vast collection of mating nucs were counted as hives.

Regardless their challenges managing such a huge number of hives, Miel Carlota was among the most innovative and progressive honey companies in the world. They designed and patented unique hive equipment, build their own wax foundation mill, and wrote books which educated thousands in practical beekeeping. I have a copy of one of their first texts, Pequena Guia para el Apicultor (Small Guide for the Beekeeper), written in 1955 by Speck and Wulfrath. The book is refreshingly open in sharing practical and even privileged details about their techniques in successful Mexican beekeeping. For example, the authors disclose their best choice for hive equipment and, at the end of the book, they itemize expenses for establishing one’s own beekeeping enterprise – complete with all the dollars and cents in an investment.

By the mid-1950s, Miel Carlota was the world’s largest queen producer. Dr Eva Crane, a bee science writer and researcher, visited the outfit in 1957.  Dr Speck took this picture of Dr Crane as she watched Miel Carlota beekeepers grafting queen cells in the shade of one of the company’s trucks. In addition to queen rearing, the firm also led the world in royal jelly production. They invented a vacuum pumping system that sucked the food out of day-old queen cells. They could produce a tonne of royal jelly from 2,000 hives in three months. Their surplus helped create a craze for the stuff as a dubious health food. One of Miel Carlota’s biggest royal jelly fans was Pope Pius, according to Dr Speck in that 1958 Waco Tribune interview. (The pope died a few weeks after that interview, so by the next year, his endorsement was less convincing.)

Below is a picture taken at one of Miel Carlota’s queen rearing stations. It’s from their guide, Pequena Guia para el Apicultor. The instructional point here is that even in 1955, when this book was published, they knew that they needed hives dedicated to drone production, as it says in the caption, “Hives for raising queens. On the left, hives for drones.” It took most North American queen breeders another decade of so to really catch on to the need to introduce and promote selected drone stock into their breeding programs. I still know some who don’t understand the need! 😦

In 1973, 1974, and 1975, Canadian beekeepers imported thousands of these skillfully produced Mexican queens. (For example, 4,500 queens in 1974.) However, the lineage was tropical, so the Alberta government pioneered an effort to have winter-hardy Canadian stock sent to Miel Carlota for breeding stock. Here’s the Alberta government press release from 1975:

November 3, 1975
FOR IMMEDIATE RELEASE
MEXICAN QUEEN BEE PROJECT
Three hundred honeybee queens left Alberta by air recently for Mexico! Their destinations were a number of commercial Mexican beekeepers, including Miel Carlota, the largest queen breeder in the world. Alberta Agriculture, which is sponsoring this Mexican Queen Bee Project, hopes to get about 1 0,000 young queens from this initial investment by next spring. Dr. Ulf Soehngen, provincial apiarist in charge of the project, explains that Alberta sent its own queens to Mexico so that the Mexicans could produce the strain of bees that are most suitable for our climatic and environmental conditions. “The majority of the strains currently being used in Mexico,” he says, “have been selected for aggressive characteristics to discourage hive pilfering in outlying areas of the country. However, since these aggressive traits are not needed here, and since they make the bees more difficult to handle, it was decided to send our own honeybee strains to Mexico for multiplication.”

Most of the queens that have gone to Mexico were produced this year from stock that was originally selected in northern Saskatchewan. They are primarily Caucasian queens because this strain tends to be more winter-hardy than the Italian strain, which is the other main type used here. Dr. Soehngen says there is a growing trend in this province towards overwintering honeybees because of the difficulty of obtaining package bees and queens in the spring and because of their ever increasing price. The queens were sent to Mexico in cages, each cage containing one queen and half a dozen workers. Except for Miel Carlota, package bee production and queen breeding are new to most Mexican beekeepers with the result that the present project involved a considerable amount of preliminary work on the part of Alberta Agriculture personnel.

The reason the government decided to import bees from Mexico was to ensure that Alberta beekeepers will have a supply of relatively high quality queens and that the price of these queens will be lower than the price currently being charged in the United States.

The project soon failed. Not because of poor craftsmanship from Miel Carlota, but because of timing. Tracheal mites (and then varroa) were soon discovered in Mexico. African honey bees were approaching Mexico. I can’t say that this was a government boondoggle, but overseeing a bee project in Mexico during the Canadian winter at taxpayers’ expense would have been enticing. And surely Canadian scientists clever enough to know something about raising queens would have known about the potential maladies that were on their way.

Miel Carlota started with five hives June 5, 1943. In 12 years, they had perhaps 50,000. (According to R.B. Willson, 1955, Gleanings) The growth was amazing. They had huge crops, were extraordinarily progressive, and entered an area with no commercial beekeepers. In their beekeeper’s guidebook, they present a plan for other beekeepers wishing to expand. It’s almost childish in its simplicity. Start by purchasing two hives, then split them every four weeks. You can see how they got to 16,384 colonies in just one year. It’s the magic of compound interest!

What happens to famous progressive honey companies after the founders shuffle off to unknown bee pastures? Well, by the 1980s, the company began operating mostly as a packer and distributor of

honey and various bee products. In 1989, the Mexican-based international Grupo Herdez purchased Miel Carlota and added their honey line to goodies such as canned peas, shrimp, and tomato paste. Grupo Herdez had started in 1914 but in the 1940s was selling McCormicks products, and adding other lines. Herdez acquired a series of other labels, and built Grupo Herdez into one of Mexico’s largest firms. They even spread to the USA where they own several zesty brands and Chi-Chi’s restaurants. If you’ve ever eaten MegaMex, a popular label in the states, you have purchased indirectly from Grupo Herdez and possibly eaten goods sweetened by Miel Carlota honey. Meanwhile, back in Mexico, Miel Carlota signature honey continues to make up a part of Herdez’s sales.

Ron Miksha is a bee ecologist working at the University of Calgary. He is also a geophysicist and does a bit of science writing and blogging. Ron has worked as a radio broadcaster, a beekeeper, and Earth scientist. (Ask him about seismic waves.) He's based in Calgary, Alberta, Canada. Ron has written two books, dozens of magazine and journal articles, and complements his first book, Bad Beekeeping, with the blog at badbeekeepingblog.com. Ron wrote his most recent book, The Mountain Mystery, for everyone who has looked at a mountain and wondered what miracles of nature set it upon the landscape. For more about Ron, including some cool pictures taken when he was a teenager, please check Ron's site: miksha.com.
View all posts by Ron Miksha →
This entry was posted in Beekeeping, Books, Commercial Beekeeping, History, People, Queens and tagged Alberta, Mexico, Miel Carlota, queen breeding, royal jelly. Bookmark the permalink.