My Failure as a Beekeeper: Part VI 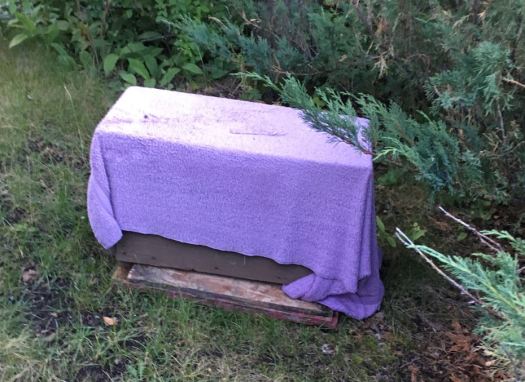 My anno horribilis apis had one more final insult to bestow upon my ever-shrinking self-esteem. Our little hive was attacked by robber bees. Once again, it was a scene entirely reminiscent of Tolstoy’s dying Moscow:

There is no longer the measured quiet sound of throbbing activity, like the sound of boiling water, but diverse discordant sounds of disorder. In and out of the hive long black robber bees smeared with honey fly timidly and shiftily… Formerly only bees laden with honey flew into the hive, and they flew out empty; now they fly out laden. – Leo Tolstoy, War and Peace, Chapter 20.

Alas, one morning about a week ago, we were greeted by hundreds of bees surrounding our defeated little hive, the colony that had failed to raise a queen. I had been planning a trip to my daughter’s farm to return the miscreant hive. Now the demise and return of equipment were urgent. I was compelled to conclude the sad business of the hive that had failed.

If you’ve never experienced robbing – at your shop, from the back of a truck, in an apiary –  you have been very, very lucky. Or you simply never noticed that robbing was going on. If the latter is the case, please consider a different hobby – if you are oblivious to the stinging rage of robber bees, then you should put away your hive tool.

An inexperienced beekeeper may think something wonderful is happening at the hive when he/she approaches and hundreds of bees are encircling it. The scene can be quite exhilarating, at first. Like showing up at your house late one evening and seeing dozens of people racing in and out. You might think they are there to decorate your home for a surprise party for you. Then you notice, as Tolstoy did in the little excerpt above, that those unexpected guests are arriving empty-handed but leaving with your stuff.  So it is with the robbing bees. They are having a party and you are paying for it.

It was just nine in the morning. My daughter came into my office, “Dad something is going on at the hive. There are too many bees flying around it.” Since this had been an odd colony all year, I didn’t know what to expect. Were they absconding, leaving their home for some better beekeeper’s apiary? But soon I saw the excited bees and I could hear the unusual high-pitched buzzing. As I neared the nuc, I could see greasy black bees fighting the hive’s guards at the small entrance. Other than the auger hole partially obscured by a wire-mesh screen, the box was sealed and impenetrable. But the robber bees were attracted by the smell of honey and were trying to get in. It was obvious that a few had slipped past the guards and were looting the goods, carrying honey to some distant hive, and returning each time with more bees to help with the theft. At 9 am on a mild morning, a full scale attack was already underway. 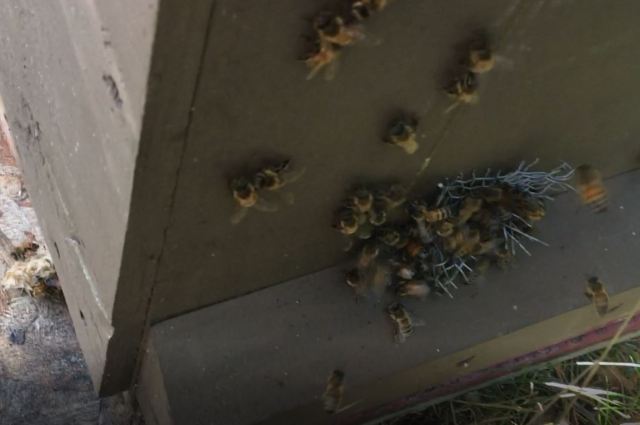 To enter, bees slip around the edge of the screen. Wasps tend not to learn that trick but robbers usually figure out the route. Most of the bees in this picture have just arrived to steal from the nuc, only a few actually live here. The nuc’s own bees (there are just a couple thousand still alive) are doing their best to keep the thieves out. Notice that these robbers are not black and sticky the way Tolstoy described. That’s because the robbing has just started. After a few hours, the robbers will begin to look rougher, loosing their fuzzy hairs along with their dignity as the melee progresses.

What would you do in this situation? Would you accept that the small hive was good as dead and you might as well let the robbers clean out the equipment for you?  I hope not. First, your hive may harbour bee diseases or mites which the invaders will collect and haul back to their own homes. Never let bees rob! I cringe when I hear a new beekeeper report leaving their extractor and equipment outside for a few days so robbers can ‘clean it up’. In most parts of the world, that’s illegal because it’s an easy way to spread disease. In a big city like ours, there is a second reason to avoid allowing bees to rob.

Robbers come in marauding hordes that would impress Atilla. Two bees become twenty in fifteen minutes. Those twenty invite two hundred. Within an hour or two, you may have thousands of robbers. Robbers, when they leave their own home, only get a partial set of directions – so they wreak havoc in a wide area while looking for the site of the looting. That wide area can include neighbours, kids, and pets. That’s the second big and very important reason not to allow robbing – you might hurt the folks next door.

To me, seeing robbing in action gives a rush as if I were seeing the start of a fire. There’s not a second to waste – it has to be stopped or it will grow until the entire world is consumed and your neighbours will tar and feather you. As they should.

There are tricks that might stop the robbing. An effective one is to turn on a sprinkler. My 15-year-old ran over with the garden house and we put it atop the nuc. First, though, I covered the hive with a large towel. When the water started, the robbers scattered and the towel became wet, sticking to the nuc’s lid and sealing the little auger hole. 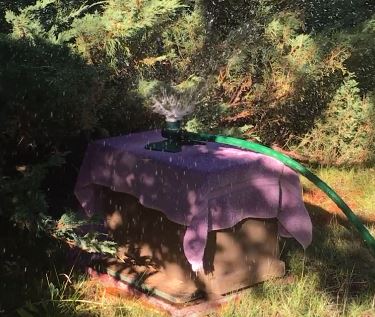 Bees kept coming for a half hour because they were still being instructed by scouts back at the hive. It took time before everyone got the message that “It’s raining over at the Miksha’s.”

Thus ended my year of failed beekeeping. There were certainly years when, as a commercial beekeeper with a thousand hives, I lost more money. But this was pretty crushing. Among my lessons:  Don’t keep a weak hive. Don’t go to Europe mid-summer. You can’t control everything. You never can tell with bees. And, most significantly, let everything be a lesson.

As we assessed the damage, my son asked what’s next. I told him that we could shut the water off in another hour or two and leave the wet towel in place until evening. We did. Then, as it got dark, he helped me slip the hive back into the same big black plastic bags that held the nuc when I brought it from my daughter’s farm.  My 15-year-old wants to try again next year. But as he lifted the plastic-clad hive, he said, “Dust to dust. Plastic bag to plastic bag.” The colony had run its course.

Even after fifty years around the bees, things sometimes go wrong.  If you think you know everything about bees, you don’t know anything. I have sometimes heard new beekeepers, puffed up with self-importance, brag about their skills. If those folks beekeep for a few years, they usually become humbled by their bees and acquire a less arrogant attitude. Eventually, they come to agree with the old adage that “Beekeeping is one of those things where you start out knowing everything but as the years go by, you realize you know less and less… If you keep bees long enough, you figure out that you really don’t know anything at all.”

Ron Miksha is a bee ecologist working at the University of Calgary. He is also a geophysicist and does a bit of science writing and blogging. Ron has worked as a radio broadcaster, a beekeeper, and Earth scientist. (Ask him about seismic waves.) He's based in Calgary, Alberta, Canada. Ron has written two books, dozens of magazine and journal articles, and complements his first book, Bad Beekeeping, with the blog at badbeekeepingblog.com. Ron wrote his most recent book, The Mountain Mystery, for everyone who has looked at a mountain and wondered what miracles of nature set it upon the landscape. For more about Ron, including some cool pictures taken when he was a teenager, please check Ron's site: miksha.com.
View all posts by Ron Miksha →
This entry was posted in Beekeeping and tagged Alberta, Calgary, family, robbing bees, weak hives. Bookmark the permalink.

13 Responses to My Failure as a Beekeeper: Part VI