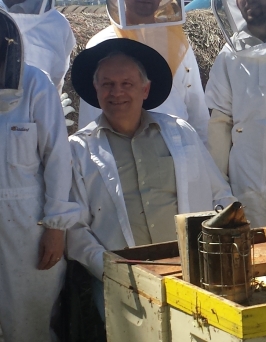 As 2017 draws to a close, let’s look back at the year’s best beekeeping stories. With lower honey prices in 2017, some beekeepers left the business and colony counts fell a little.  Back in 2016, I reported that honey bees were in recovery – colony collapse hadn’t been reported in five years (now six) and (in Canada, at least) there were more bees than anytime in Canadian history.

Many of the world’s 20,000 species of bees are in trouble from chemical exposure, climate change, and habitat loss. Some have been listed as endangered, at risk of becoming extinct. However, honey bees are managed livestock – their numbers rise and fall depending on honey prices and pollination demands of fruit and almond growers. Worldwide, the number of kept honey bees is still near last year’s record high because beekeepers do all they can to care for their little friends, feeding and protecting them – and earning a livelihood from their bees.

The most popular post of 2017 was my story on Chinese honey.  One More Thing About Chinese Honey… focused on the dreadful way that wet honey is often taken right from the broodnest, then dried in industrial evaporators until its moisture is low enough to sell the syrup as “honey”.  It’s not what you and I would call honey.

The second-most read piece from 2017 was a revision of the story of Warwick Kerr, the Brazilian geneticist who “Invented Killer Bees”. I’m glad that you liked that piece because Kerr’s story, published on his 95th birthday, is important on a lot of levels. The Brazilian military dictatorship tried to destroy Professor Kerr, but his worked helped the poor people of his country tremendously.  If you missed that blog post, I hope that you’ll find time to read it now.

In 2017, people from 174 countries dropped by to learn some bad beekeeping (Hello, Zambia! And Azerbaijan, Mongolia, Bosnia, and 170 other countries!) from this blog. The majority of readers are in the USA, Canada, the UK, Australia, and New Zealand, so I will continue to write mostly in English and mostly about beekeeping in the west.

I published 101 bee blog posts in 2017 – that was about 75,000 words. A lot of bee news, ideas, and opinions.  All of those bee stories were fascinating,  but here are some of my favourites:

One More Thing About Chinese Honey…

We hear a lot about Chinese honey. It’s worse than most people realize.

From a news story about a fellow (“Prince Charles’ beekeeper”) trying to keep his bees alive by doing something he apparently wasn’t supposed to be doing.

Maple syrup has a dark side.

Eating the Vomit of Slaves?

There are people out there who say honey-eaters are consuming the vomit of slaves. Bees are slaves? The idiots couldn’t be more wrong if they tried.

Pollen comes in many colours – mostly golden yellow, but white, green, tawn, you name it.  Bees are packing in black pollen right here in Clagary. Thing is, no flowers are blooming.

March 30th, my birthday, has been chosen as World Apitherapy Day. What an honour!

Daffodils are blooming much too early. What does that mean for bees?

Calgary has a Stampede and at the fair grounds is an annual Aggie Days agricultural exhibit. This year we judge local honey. See what’s involved in honey judging.

Not all honey is created equal. I use some stats and 505 samples of honey from the USA (and few hundred more from abroad) to find the world’s sweetest honey.

The March for Science and all its associated excitement. Enough here for a 2-part story, so I posted two consecutive pieces.

Have These Kids Found a Way to Kill Varroa?

Can a comb brush off varroa before it enters a hive?  That’s what these elementary school kids figured would happen with their 3-D printed gadget.

There are just a few really good bee-related podcasts. PolliNation is one of them. Produced by one of Oregon State’s newest profs, my friend Andony Melathopoulos.

Every day should be World Bee Day.

With 20 comments, this was one of our most engaging post in 2017. This is basically an overview of some differences in queen bee quality.

We look at the infamous “June Gap” – the period after the spring nectar flow, but before the summer and autumn honey comes in.  It’s a risk time for the bees.

Not much is remembered about Miel Carlota, founded by German immigrants to Mexico. They had over 50,000 hives back in the 50s. Then their company disappeared.

The Beekeeper Everyone Knows

Sir Edmund Hillary was likely the only beknighted commercial beekeeper. And he and his friend Tenzing Norgay were the first to survive Mount Everest’s summit.

Are You Giving It Away?

This post is a look at honey prices. Most of us are giving it away.

Does the Truth Matter?

My perennial gripe.  These days it seems telling the truth is no longer a matter of honour. I’m getting tired of exaggerated bee stories passing as news in the media. I vent a little.

My friends at the Hutterite Colony try to emulate the honey bee’s work ethic. So do the Mormons who live near us.  Should I tell them that bees are a wee bit lazy?

My Failure as a Beekeeper

In this six-part series (!), I expose my very bad beekeeping.  Just when you think it can’t get worse, it does.

95th Birthday for “The Man Who Made Killer Bees”

This was the most popular post for the entire year. The man who brought Africanized bee stock to America had his 95th birthday. Warwick Kerr’s story is important. I’m glad that thousands of you read this piece.

They Got Me – on Kiwimana Podcast

Kiwimana, a great bee podcast out of New Zealand, called me up and we chatted for an hour. Want to hear how I ramble unfettered by print? Here’s your chance!

Here’s a simple and practical explanation of how creamed (spun?) honey is creamed and spun. Includes the secret formula.

This blog post is a short summary of a paper by Jeff Ollerton which reviews the state of the world’s pollinators. What’s happening to them?

Busy as a Bee

Writing this blog is one of many things that fill my day. This blog is important to me and in Busy as a Bee, I apologize for not writing enough.

The Man Who Discovered that Bees Can Think

2017 was the 150th birthday anniversary of Charles Henry Turner. He was an American bee scientist who figured out that bees can solve problems, have personalities, and think. But he’s largely unappreciated, almost forgotten.

That’s a quick summary of some my favourite blog posts from 2017. I only write when I get a free hour or two, but it added up to 101 short stories – enough to fill a small book. With the new year upon us, I hope you’ll drop by occasionally and see what’s new in bees in 2018. Meanwhile, have a healthy, happy, and sweet new year!

Ron Miksha is a bee ecologist working at the University of Calgary. He is also a geophysicist and does a bit of science writing and blogging. Ron has worked as a radio broadcaster, a beekeeper, and Earth scientist. (Ask him about seismic waves.) He's based in Calgary, Alberta, Canada. Ron has written two books, dozens of magazine and journal articles, and complements his first book, Bad Beekeeping, with the blog at badbeekeepingblog.com. Ron wrote his most recent book, The Mountain Mystery, for everyone who has looked at a mountain and wondered what miracles of nature set it upon the landscape. For more about Ron, including some cool pictures taken when he was a teenager, please check Ron's site: miksha.com.
View all posts by Ron Miksha →
This entry was posted in Apitherapy, Bee Biology, Beekeeping, Culture, or lack thereof, Diseases and Pests, Friends, History, Hive Products, Honey, Honey Plants, Killer Bees, Movies, Outreach, People, Pesticides, Pollination, Queens, Save the Bees, Science and tagged blogging. Bookmark the permalink.