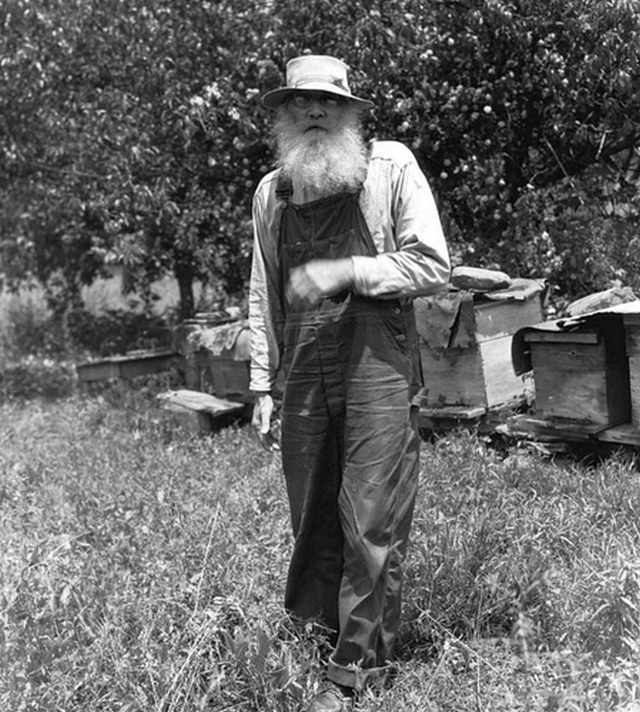 A few days ago, three long-time beekeepers were asked to sit on a panel and take bee-management questions from a large audience of (mostly) younger, newer beekeepers. The three beekeepers were all commercial beekeepers or had run commercial outfits. Altogether, they probably had 130 years of beekeeping experience. I’m not saying that a combined number of years means everything – the audience numbered over a hundred folks so the audience probably had over 300 years of experience.  But there they sat, these older, experienced beekeepers, taking questions.  I was one of the old guys on the panel.

I admit that being old and experienced does not necessarily make you good. One of our local Calgary bee club flame wars was a hot dispute about cooking varroa with heat. This was met by derision from some of us older beekeepers. “An old idea, tested and rejected. The heat will won’t kill many mites but can kill bees,” some of us old people said.  Well, the club beekeepers with very little experience who had read about this treatment on the internet wouldn’t give up. One of them finally wrote, “Arrogance of age is not wisdom.”  That really stuck with me. It’s true. Just because someone is old, they are not necessarily wise. But there is a strong correlation.

It’s awkward to be one of three on a panel when you respect and admire the other two panelists. It’s especially awkward when you know they are smarter than you. Someone in the audience asks a question. You sit there, microphone in hand and begin with “Well, it depends…” and you give your off-the-top-of-the-head answer. The mic passes to a better beekeeper who politely rebukes your answer with a good response that you don’t agree with, but you smile and nod anyway, knowing that their response to that question might be right, some of the time. Then the third panelist answers in yet another way. 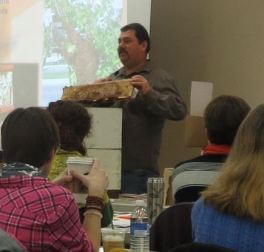 One of the panelists was Neil Bertram, a youngish beekeeper with 30 years of experience and about 300 hives. That’s him, to the right. Neil consistently produces over 200 pounds per hive. One year he hit 100,000 pounds from 300 hives. Pretty good, eh? Neil is my co-teacher in our workshop “making money from honey” – Neil tells the participants how to do it right while I’m at the workshops for comic relief, telling the students how they might lose money by keeping bees. (I’m really good at that.)

The other co-panelist at the bee club’s “Ask the Experts” night was the luminous and accomplished Allen Dick, someone many web readers know. Allen has an extremely popular website where he dispenses great practical advice – the nuts and bolts of beekeeping. We both, separately and unbeknownst to each other, began our respective websites the same year, back in the 1990s, making ours the oldest two bee sites in the world.

I think that Allen’s website is better than mine (but thank you for reading this).  I tend to focus on bee squabbles, news, and interpretations of bee research while Allen Dick’s Honey Bee World has been a respected go-to site for down-to-earth beekeeping tips. (Though he doesn’t mind jumping into squabbles!)  If you want to know how to keep bees better, he has the site to search.

Allen Dick doesn’t attend the Calgary bee club meetings very often. He lives over an hour north of the city. So, with him in town, the bee club asked if he’d give a spring management talk before the panel took questions.  Here’s the old geezer at Wednesday night’s meeting.  He walked the new beekeepers through the bee routines that they need to know to get their hives in shape for summer.

Panels are great.  When I’m asked a bee question, I often give two answers which will probably solve the issue, but a panel of three people yields six opinions. Isn’t that wonderful?  Here’s an example. Someone asked, “If I have two really good hives, should I put a third brood chamber on top or split them – but I don’t want more hives.”  I answered first, explaining that the bees likely don’t really need a third deep Langstroth brood chamber. There are lots of tricks to keep bees from swarming – foundation, rotating pearl brood down, inserting dry frames into the brood nest (weather permitting), and so on. This usually keeps all the bees home and maximizes the crop. Then the microphone passed to Allen. He agreed but added something that I would not have thought of until after the meeting was over and everyone had gone home.  Allen suggested splitting off a good new third hive from the two powerful  ones and . . . selling the new split.  He added that it’s easier to sell a hive than sell honey. That’s a brilliant answer. And that’s why it’s good to ask three ‘experts’.

Having three professionals on the panel, all of whom are hedging and interpreting questions differently, can be eye-opening for some new beekeepers. One of the harder things for novices to accept is that the world of beekeeping is loose and fast and everyone may be right and wrong at the same time – depending on the situation. Every question has multiple answers. Experienced beekeepers often respond with, “Well, it depends…” leaving the novice beekeeper wondering why there is no single correct answer.  Although there are important “correct” concepts (“don’t kick the hive” and “bees don’t fill supers that are left in the shop”),  most bee things are complicated.  This is worth remembering if you are new to bees.

On several occasions, I’ve had new beekeepers ask for a step-by-step guide complete with dates which they can place on their family calendars, like so many anniversaries and birthdays.  “March 4th, start feeding the bees pollen” and  “June 23rd, place first honey super on hives”.  But those dates vary every year.  Shocking as it may sound to some folks, there’s no recipe book for keeping bees. There are certainly some (almost) inalienable beekeeping truths. But every year is different. Every apiary is different. Every hive is different. The good news? If you keep your lights on, your eyes open, stay curious and adventurous, and live long enough, you will probably become an experienced old-timer beekeeper yourself.

Ron Miksha is a bee ecologist working at the University of Calgary. He is also a geophysicist and does a bit of science writing and blogging. Ron has worked as a radio broadcaster, a beekeeper, and Earth scientist. (Ask him about seismic waves.) He's based in Calgary, Alberta, Canada. Ron has written two books, dozens of magazine and journal articles, and complements his first book, Bad Beekeeping, with the blog at badbeekeepingblog.com. Ron wrote his most recent book, The Mountain Mystery, for everyone who has looked at a mountain and wondered what miracles of nature set it upon the landscape. For more about Ron, including some cool pictures taken when he was a teenager, please check Ron's site: miksha.com.
View all posts by Ron Miksha →
This entry was posted in Beekeeping, Friends, Outreach and tagged Allen Dick, beginning beekeeping, Calgary Bee Club, Neil Bertram. Bookmark the permalink.

10 Responses to Ask Three ‘Experts’ (and get six answers)