What if my pet gets stung? 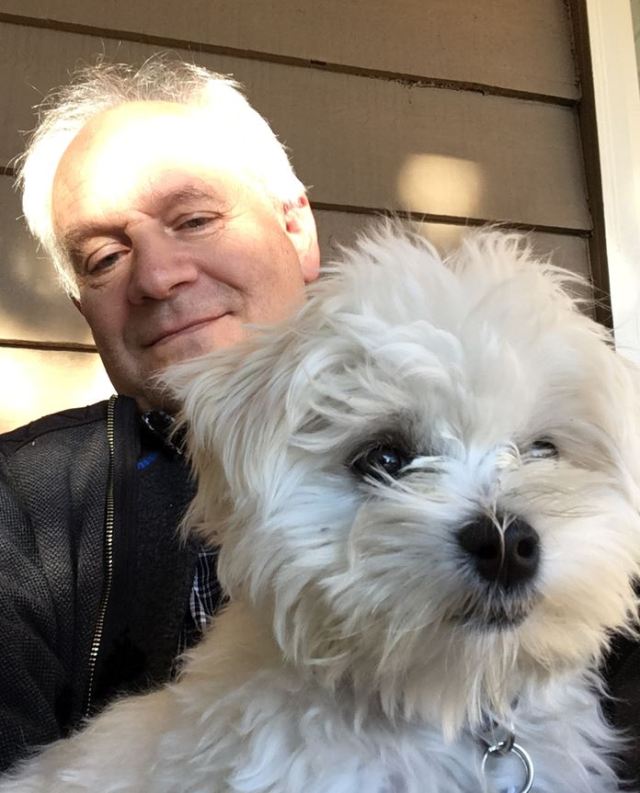 Me and the dog: handsome but dumb.

Calgary has a dry climate. After it rains, some of our bees celebrate by sucking cedar water from our deck. I’m not sure what the attraction is, but a few bees always sit on the wet deck and lap up whatever it is they are finding attractive. Maybe there are salts and minerals leaching from our year-old deck. Bees, as you know, need minerals. Some beekeepers, keeping colonies in monoculture areas, supplement their bees’ diets with mineral and vitamin supplements. I’m not sure that’s legal, but try to stop a beekeeper who thinks she is helping her bees.

Our colonies are sitting amid a diverse ecological landscape with quite a variety of pollen nearby, so I’m not sure why the bees would be collecting mineralized/salty water, but a dozen or so drop by and mop our deck. Of course, it could be that the only attraction is water – bees use water for cooling and for baking beebread. However, even though there is water everywhere after a rain, the only bees that I see gathering water are on our deck. (It’s possible that I simply don’t see bees that are in the grass or on nearby rocks.) 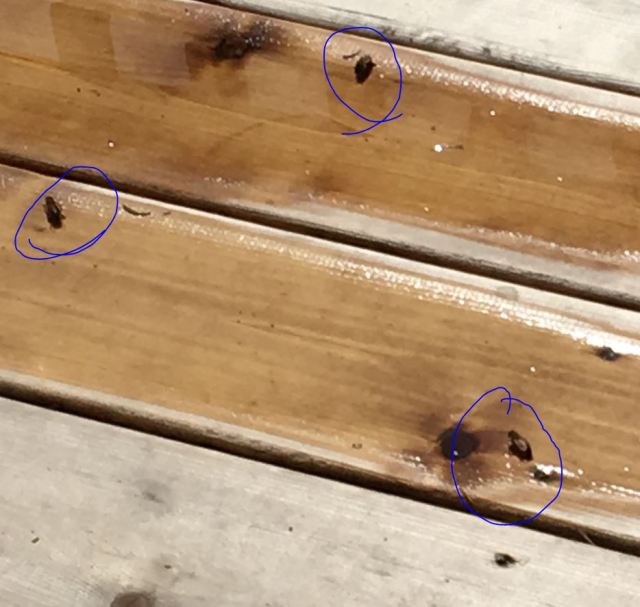 I don’t mind. There aren’t many.  If there were hundreds, I’d try to figure out how to evict the bees.  However, I have a minor concern for our dog. He’s a handsome yearling, smart when he wants to be, but sometimes dumb as a stick. He tries to sniff the bees. I’ve also caught him trying to pick one up with his teeth. He is yet to be stung, but it seems inevitable. 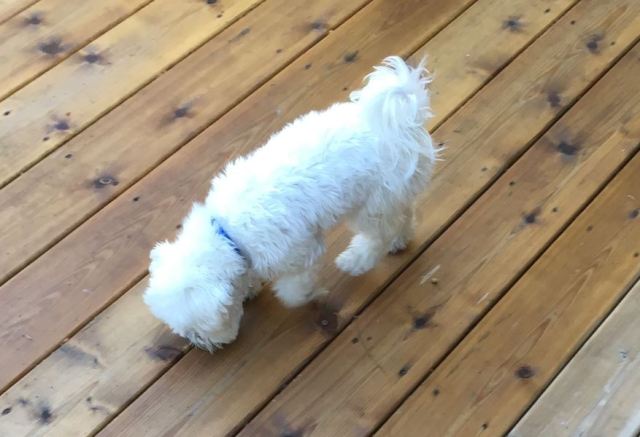 Close encounter with a honey bee.

I’ve asked beekeeper friends who tell me that pets can have similar reactions as humans, ranging from benign, but painful, learning experiences to severe systemic reactions.  It’s the latter that I worry about, of course. If he only gets a big swollen face, we can feed him with a syringe for a couple of days. But if it’s a serious reaction, do we give the little fellow antihistamines and a stab from the epipen?

I’ve checked a couple of vet websites. The information is surprisingly familiar – try to remove the stinger to stop the injection of venom, monitor the amount of swelling, call a vet.  All of that’s the same as I would do for a toddler, including calling a vet. If breathing becomes impaired, Benadryl is recommended (our dog is mostly fluff so the dose would be really small). I saw no mention of epinephrine, but I think I would steer clear of that, unless it looked like our puppy was about to cross the River Styx. I’d like to hear from readers – has your pet been stung? Have you trained your animals to avoid sniffing venomous insects? Do you have any suggestions that might reduce the risk of stings?

Ron Miksha is a bee ecologist working at the University of Calgary. He is also a geophysicist and does a bit of science writing and blogging. Ron has worked as a radio broadcaster, a beekeeper, and Earth scientist. (Ask him about seismic waves.) He's based in Calgary, Alberta, Canada. Ron has written two books, dozens of magazine and journal articles, and complements his first book, Bad Beekeeping, with the blog at badbeekeepingblog.com. Ron wrote his most recent book, The Mountain Mystery, for everyone who has looked at a mountain and wondered what miracles of nature set it upon the landscape. For more about Ron, including some cool pictures taken when he was a teenager, please check Ron's site: miksha.com.
View all posts by Ron Miksha →
This entry was posted in Stings, Strange, Odd Stuff and tagged animals and bees, bee stings. Bookmark the permalink.

10 Responses to What if my pet gets stung?