For the past two days, I described how we might predict a future honey flow. I mentioned how difficult soothsaying can be yet I went on to say that experience and a tool like a scale hive can help us plan for the season.  We have to prepare for the extremes, not just the average.

If your bees could make a hundred pounds in an exceptional season, but you own just two shallow supers because the average crop is fifty pounds, you will never make the big crop. (If you have a long strong flow, you might extract two or three times, but extra supers are still a good idea.)

On the other hand, you might not make any honey some years, even though the long-term average is good. Drought, frost, rain, plant pests, floods, or hail can cancel your plans. More things can go wrong than go right – crop failures are pretty common in beekeeping. So, keep your bank account and credit record topped up. And buy sugar when it’s on sale even if you are sure you’ll never need to do any emergency feeding.

Here’s something unexpected that happened to me late yesterday afternoon. It had been a warm beautiful morning and sunshine was in the day’s forecast. I was driving a few kilometres inside the city of Calgary.  To the north it was sunny and hot and stayed that way all day. Further south, near my home, I drove through a ferocious rainstorm followed by ‘golf-ball-sized’ hail. It littered the ground with ice.

Storms usually track from west to east on our continent. Beekeepers figured this out years ago. As a cheap insurance policy, most commercial beekeepers stretch their yards from north to south, not from west to east. Then, if a hail storm destroys an alfalfa field along one narrow strip, a short drive north, the fields are likely spared.  Similarly, one west-east band may be hit by drought while just a short distance south there might have been a refreshing mid-summer rain reviving a dwindling nectar flow. Placing yards north to south mitigates the risk.

As it turned out, yesterday’s hail storm reminded me yet again of the vulnerability of beekeeping and its inherent unpredictability. The storm erupted and ended as suddenly as a light switch turns light to dark to light again. Flowers were flattened, but the hail was accompanied by heavy rain – usually welcomed in my area in the summer.

Meanwhile, I wondered about the bees in my hives. Bees, as you know, are sensitive to vibrations. It’s part of their communication system. Migratory beekeepers know that the regular vibration of the road and truck engine calms their bees during long trips. So, what do bees do when fifteen minutes of hail stones pound their hives’ lids during a storm? I can imagine a lot of confusion. But the bees inside the hives are the lucky bees. Bees caught outside when a sudden hail storm strikes are not nearly so lucky. Here’s what my backyard hives looked like in the late afternoon. Later, I’ll peak inside and ask if everyone is OK. 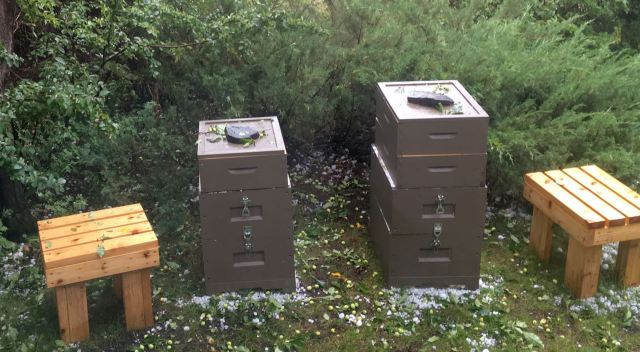 Ron Miksha is a bee ecologist working at the University of Calgary. He is also a geophysicist and does a bit of science writing and blogging. Ron has worked as a radio broadcaster, a beekeeper, and Earth scientist. (Ask him about seismic waves.) He's based in Calgary, Alberta, Canada.
View all posts by Ron Miksha →
This entry was posted in Bee Yards, Beekeeping, Climate, Commercial Beekeeping and tagged Bee Yards, extreme weather. Bookmark the permalink.

14 Responses to Expecting the unexpected