At least one of these bees is a laying worker 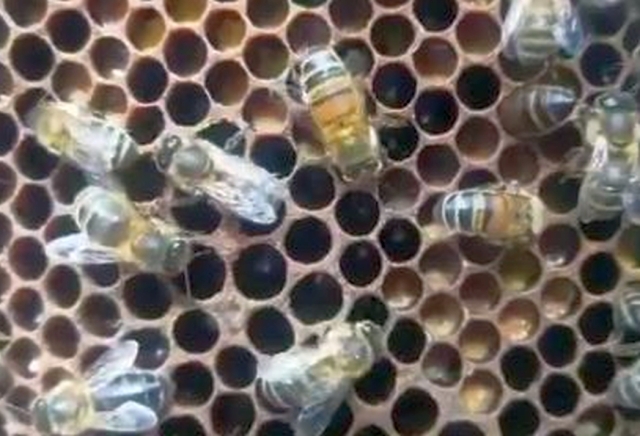 Can you spot the laying worker?  (Photo: Chris Manton)

At least one of the bees in the picture above is a laying worker. Can you spot her?  I can’t. But if you read this post to the end, you will have the answer – and a really nice bonus, a video clip of a laying worker laying an egg.

I wouldn’t be able to point out the laying worker, but I’ve heard people claim that “when a laying worker takes over a hive, you’ll notice her because of her long abdomen.” There’s so much wrong with that statement. I’ll explain in a moment.

First, a few words about laying workers. Although it may seem handy to have some extra egg-laying honey bees in your hive, the progeny of a worker is a drone.  Workers are females and can lay eggs. However, they can’t mate, so their eggs are never fertilized. Unfertilized eggs become drones. A colony with no queen will eventually develop laying workers but the offspring are drones, not workers, so the colony fails.

Why do laying workers exist in the bee world?  Creatures of all sorts persist for generations if they do things that produce and nourish their offspring. The present generation is a reflection of the survival strategies of earlier generations. One result has been the abundance of drones in dying colonies. Whether it’s a hive with a drone-laying queen or laying workers, failing colonies spread their genetic “seed” through drones that fly off and perhaps mate with a queen, keeping the lineage alive, even if the colony dies. The bees don’t think in these terms, of course. Instead, it’s a natural process which gets reinforced because those failing colonies that issue lots of drones will carry the genetic tendency to produce laying workers and issue lots of drones in future generations. So, it’s natural and reinforced by circumstances of survival.

Workers that begin to lay eggs are probably more common than we realize. Even in normal, queen-right colonies, the many workers lay eggs. According to Jay and Nelson, 1973, ovary development in worker bees is least common in (1) queen-right colonies with brood, but increases in occurrence in (2) queen-right colonies without brood, in (3) a colony which has some laying workers and no brood,  while the development of ovaries in workers is almost a sure bet in (4) a colony with no brood and no queen.  Obviously, to avoid laying workers, keep a queen and brood in your hive.

A few years ago, scientists found the actual chemical pathway that queen mandibular pheromone, or QMP, suppresses the workers’ egg laying. Their work was important enough to be published in the prestigious Nature. The scientists conducted experiments with adult worker bees by depriving them of QMP. In absence of the queen pheromone, they noticed that one-third of workers develop egg-laying capacity. In the presence of QMP, 5% of workers are not fully inhibited and can lay eggs. I wasn’t aware of either statistic and was surprised at how high these rates are.

If 5% of workers in a normal queen-right colony are able to lay eggs, do they? That could mean thousands of laying workers in a queen-right hive. Well, in addition to the eusocial biological control (fully developed mated queen vs unfertilized laying workers), the bees have mechanisms in place to deal with errant egg laying. Most worker-laid eggs are disposed by house-keeping bees. As queen pheromones would not be present in eggs laid by workers, other bees treat the eggs as they would treat any bits of garbage.

The other statistic – one-third of workers in queenless, broodless hives can be laying workers, is equally surprising.  I had previously assumed that “a few” workers in a queenless hive become laying workers. My assumption was based on the evidence that I’d seen – rarely are there more than a few hundred worker eggs in a depleted queenless hive. So, my hunch was that ovarian development among workers wasn’t common, even in a fully queenless hive. But the Nature journal paper tells us that “In a queen-less environment, if there is no opportunity to make another queen, approximately one-third of honeybee workers activate their ovaries and lay eggs. These eggs are unfertilized and haploid, and they generate fertile male offspring.”

For a beekeeper, laying workers are a discouraging sign. Since it’s most likely to happen in a colony with no queen and no brood, you have to blame yourself for letting the colony fall to such a low state. If you discover a laying-worker hive among your own bees, I might suggest that you give up beekeeping – except that it’s happened to me, too. And every honest beekeeper I’ve ever met will fess up. Stuff happens.

This is one of the best pictures of the result of laying workers that I’ve ever seen. If you see multiple eggs, more than one larvae in a cell, and eggs stuck to the cell wall instead of the cell bottom,  your queen is gone and laying workers have developed.
(Photo by Michael Palmer via Beesource.com)

A laying-worker hive is trouble. The situation means that you’ve lost production, the queen is long gone, and your colony is dying. It’s also a notoriously difficult problem to fix. If one-third of the bees in a queenless hive are laying workers, this highlights the challenge beekeepers face when trying to establish a new queen. Our standard advice is to move the boxes a few metres from the old stand and shake all the workers from the combs. At the old location, reuse the equipment and add some young bees, brood, and a good queen. When the bees return, they will find that you have made some changes at the old location and will generally accept this as an improvement. You won’t always be successful, but you’ve increased your odds of re-queening success to perhaps 80 or 90 percent. Other beekeepers have other tricks, but this is what I learned as a youngster and it seems to work.

Let’s get back to the mistaken statement I began with, “when a laying worker takes over a hive, you’ll notice her because of her long abdomen.” By now, you realize that a single laying worker does not ‘take over’ a hive but many laying workers arise because the important suppressive queen pheromone is missing. What about recognizing a laying worker by abdomen size?  Let’s take a look at the picture from the top of this post again:

Can you spot a laying worker?

Here’s one of the known laying workers:

We know that this is a laying worker because of the amazing video which follows, which is from Chris Manton, a UK beekeeper whom you can follow on Twitter: @ElmTreeBees.  (Go see what he’s up to.)  He deserves your attention after sharing this remarkable video of a laying worker at work:

Ron Miksha is a bee ecologist working at the University of Calgary. He is also a geophysicist and does a bit of science writing and blogging. Ron has worked as a radio broadcaster, a beekeeper, and Earth scientist. (Ask him about seismic waves.) He's based in Calgary, Alberta, Canada. Ron has written two books, dozens of magazine and journal articles, and complements his first book, Bad Beekeeping, with the blog at badbeekeepingblog.com. Ron wrote his most recent book, The Mountain Mystery, for everyone who has looked at a mountain and wondered what miracles of nature set it upon the landscape. For more about Ron, including some cool pictures taken when he was a teenager, please check Ron's site: miksha.com.
View all posts by Ron Miksha →
This entry was posted in Bee Biology, Beekeeping, Diseases and Pests, Queens, Science and tagged drones, eusociality, laying workers, pheromones, queenless hives, Queens. Bookmark the permalink.