How did your bees do?

You hear the question every time beekeepers meet. “How did your bees do?” The answer is usually in pounds, barrels, or dollars in the bank. The question came up recently here within Calgary’s bee club.

We have an extremely well-run bee association. Among our 400 members, there are many experienced beekeepers who work hard at mentoring newbies.  Sometimes mentoring means inviting folks into a bee-filled backyard (either one-on-one as friends, or as part of a formal “Saturday at the Hive” event.) We, of course, also offer bee courses with field days. They sometimes end up looking like this:

Here I am (seated, in the wheelchair) surrounded by one of our groups of eager students.

Other mentoring happens at the monthly Bees and Beers evening where loose lips have rescued many sunk hives over the years. Mentoring also takes place monthly at our well-attended meetings: 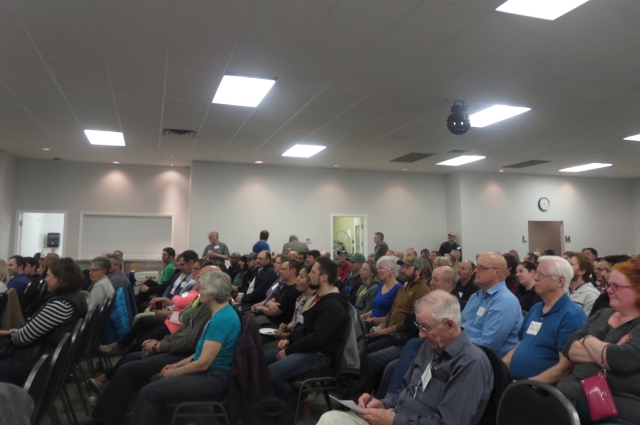 We also mentor from afar by contributing to our bee community’s gossip group (an online gab and Q&A fest). Here, everyone uses real names and tempers only rarely result in insults or threats to show up at someone’s home with a baseball bat because of, you know, differing approaches to beekeeping.

Every now and then, someone starts a particularly interesting thread in the gossip-and-advice chat group. Last week, a member asked people to comment on honey production. Here, in Alberta, Canada, crops often reach 200 pounds, so exaggeration isn’t necessary. Western Canada can be a great place to make honey. When asked about honey production, several hobby beekeepers answered. I was impressed with the consistency and honesty of the answers. Beekeepers, like fishermen, tend to exaggerate. But almost universally, the respondents this year claimed between 70 and 90 pounds per hive as their expected extracted crop for 2019. A friend with a dozen hives emailed me privately to say his crop is just 75 pounds. Some folks whom I help occasionally made a similarly small crop from 35 hives west of the city. Meanwhile, a very good commercial beekeeper told Global News that his crop will likely be half of his normal 160 pounds per hive.

It was a discouraging year for honey bees here in southern Alberta. Cool wet spells were interrupted by only a dozen nice honey-making afternoons. Such are the vagaries of honey production. Some years simply yield fewer pounds in the jar. Sort of wrecks the bragging.

But maybe we brag about the wrong things?

I’m as guilty as almost all other beekeepers when it comes to boasting about the size of my crop. But years ago, I heard that beekeepers in Sweden give the highest bragging rights to those beekeepers who lose the fewest colonies each year. I don’t know if that tale is true, but I’d like to think so. In that case, the metric for measuring greatness focuses on what the beekeeper does for the bees rather than what the bees do for the bank account.

I’d add that good beekeeping also involves mentoring responsible beekeeping as well as successful wintering. That means doing your best for both neighbour and bees. By the way, below are my own two backyard hives with my 12-year-old daughter helping me. Next week, the whole family will extract the third deep from both hives and the five medium boxes. (About 200 pounds.)  The good news – the bees survived last year’s rough winter and developed into good colonies. Trying to do it right, Swedish style. 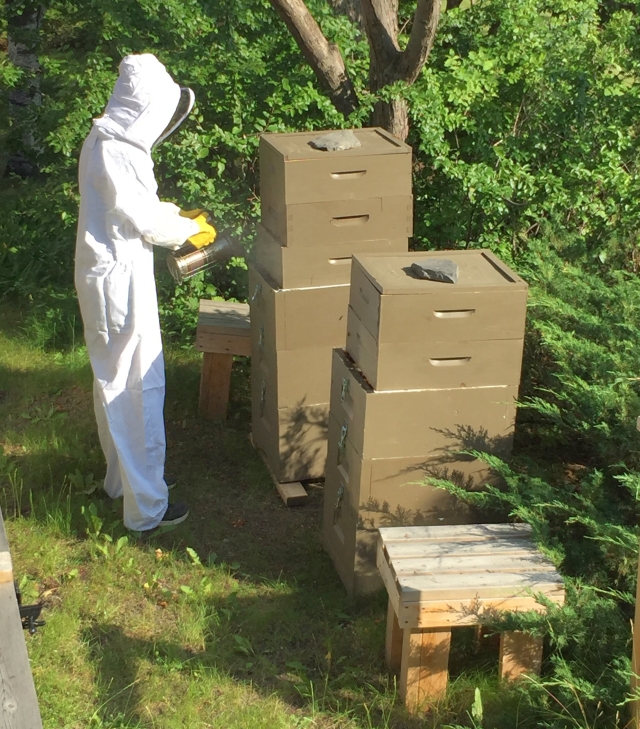 Ron Miksha is a bee ecologist working at the University of Calgary. He is also a geophysicist and does a bit of science writing and blogging. Ron has worked as a radio broadcaster, a beekeeper, and Earth scientist. (Ask him about seismic waves.) He's based in Calgary, Alberta, Canada. Ron has written two books, dozens of magazine and journal articles, and complements his first book, Bad Beekeeping, with the blog at badbeekeepingblog.com. Ron wrote his most recent book, The Mountain Mystery, for everyone who has looked at a mountain and wondered what miracles of nature set it upon the landscape. For more about Ron, including some cool pictures taken when he was a teenager, please check Ron's site: miksha.com.
View all posts by Ron Miksha →
This entry was posted in Beekeeping, Climate, Culture, or lack thereof and tagged Alberta, Calgary Bee Club, honey crop. Bookmark the permalink.

3 Responses to How did your bees do?