Winter’s coming – are you insulated?

Neither me nor the bees needed insulation in Florida’s winter.

When I kept bees in Florida, I didn’t wrap my hives for winter. In Pennsylvania, where I grew up, we sometimes wrapped hives with thin black building paper. That was supposed to keep wind out of the cracks and heat the hives with absorbed sunlight on those rare winter days when the sun shone on the Appalachians. It was there that my father also taught me that “moisture is the real killer” and he showed me how to slip burlap under the hive lid, leaving part of it dangling outside the hive, because “the burlap will act as a wick and draw the bees’ vapors out.”

In my 20s, keeping bees on southern Saskatchewan’s bald prairies (a dozen miles north of Montana), I used black cardboard boxes with a bit of pink insulation just over the lids. Winter winds sure can blow way out there. During my mid-thirties, I kept bees in northern Saskatchewan while attending university. My 300 hives were always grouped in blocks of four, each touching the other, the block surrounded with R-12 insulation on the sides and R-20 atop, then wrapped with tar paper and tied half as neatly as a solstice gift.

When I kept a few bees in the Rocky Mountain foothills, southwest of Calgary, the insulation pack was lighter. But later, I had 500 hives out on the prairie, east of the city. We sometimes strung the bees in long lines and wrapped them – because that’s what a local beekeeper was doing. (I’m a great fan of copying the locals.) But I don’t think it was that smart.

This is an odd way to winter. Drifting can be bad and working the hives isn’t easy.

We changed the formation the next year to this:

This works better. Notice the sides have little insulation.
There was R-8 equivalent on the lids.

Now I’m down to 2 backyard hives in the city. I always dreaded dealing with insulation and wrapping material, which would rip in the winter, spewing material across the landscape. It was hard, working alone, to pull winter material around a hundred hives a day when the wind was whipping. Sometimes the wind worked as a third hand, holding stuff in place, but wind has a short attention span.

Even well-wrapped hives can end up with ripped cases by spring.
This didn’t bother the bees fetching pollen.

So, I was determined to try something different. Someone mentioned polystyrene hives. These are thick-walled plastic boxes that keep hives cool in summer and warm in winter. Calgary rarely has hot summer days, but we get plenty of chilly summer mornings because of our high altitude near the Rockies and because we have very dry air. So, in Calgary, keeping bees in R-7 packaging year-round isn’t a bad idea. 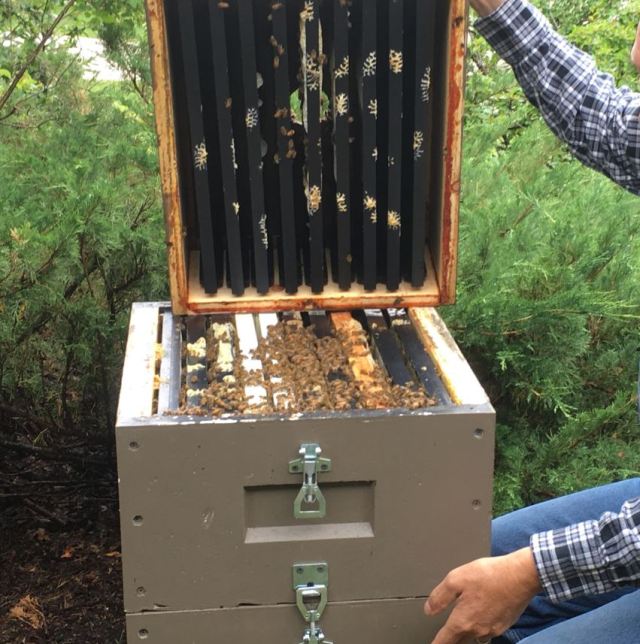 Polystyrene walls are thick! The bee cluster looks like they are inside a tree trunk.

I started with two new packages and all new equipment last year for our backyard bees. It was partly so that I could experience what hobby beekeepers face, since I teach hobby beekeepers. Starting anew, I figured that I’d try the extruded polystyrene foam hives.

In a way, this brought to mind  memories of my Pennsylvania beginnings. My father was a big fan of plastics, which were relatively new in those days. He had built a home-made vacuum mould which turned clear thin sheets of plastic into comb-honey trays. He built a plastic frame which snapped together around a sheet of foundation. I was 17 when he asked me to build a wooden form that could serve as a mould for a hive body. I made one, rather crudely, and he came home a few days later with two cans of chemical which, mixed together, foamed up and hardened into polyurethane. That’s the stuff you see sprayed inside the rafters, beams, and ceilings of some big hollow steel warehouses. My polyurethane box held frames, but shattered when I dropped it. Luckily, no bees were involved. That was my only effort with urethane hives.

In Calgary, decades later, I was again holding a plastic foam hive box. This one didn’t break when I dropped it. I installed packages into my two polystyrene hive bodies. When the inevitable spring snowstorm arrived a week later, the bees clustered warmly. The package bees grew inside their cave. But, honestly, I didn’t see any big summertime advantage. And the boxes were big and clunky.

In July, I was asked by a friend, Robert, what I thought of the insulated hives. I told him that they didn’t seem so special. Robert told me to wait until next March, “that’s when they show their value.”  Well, I was glad already, in the fall, when I didn’t have to winterize the two colonies. [By the way, those two packages each drew 35 frames of foundation, gave us 40 pounds of excess honey each, and both had stored 60 pounds of winter honey.]

One of the two packages performed more poorer than the other, going into winter with just seven deep frames of bees, but plenty of honey. By February, it was down to three frames. I ordered a replacement package, set to arrive in April. The other colony was fine. In early March, the weak hive was even weaker, with just two frames of bees. But a month later, it had overcome its funk and was developing nicely. I cancelled the package bee order. My little colony continued to grow, generating a huge mass of bees that gave us 80 pounds of honey (we extracted 120 pounds from the better colony). I’ve seldom seen an almost-dead March colony recover and make honey like that. I think the success was due to the hive’s wind-tight, thermal-right brood chambers.

I’ve been asked about moisture problems with polystyrene equipment. My own experience showed no issue. No moisture built up under the lid, though I kept an upper entrance open for ventilation, just in case. In our dry climate, too much water in the hive is rare.

About the only complaints I have with the brand of polystyrene boxes I have is that the bottom boards aren’t removable for spring cleaning, the boxes can chip easily with a hive tool, and frames fit too tightly – another 1/8-inch would have helped. 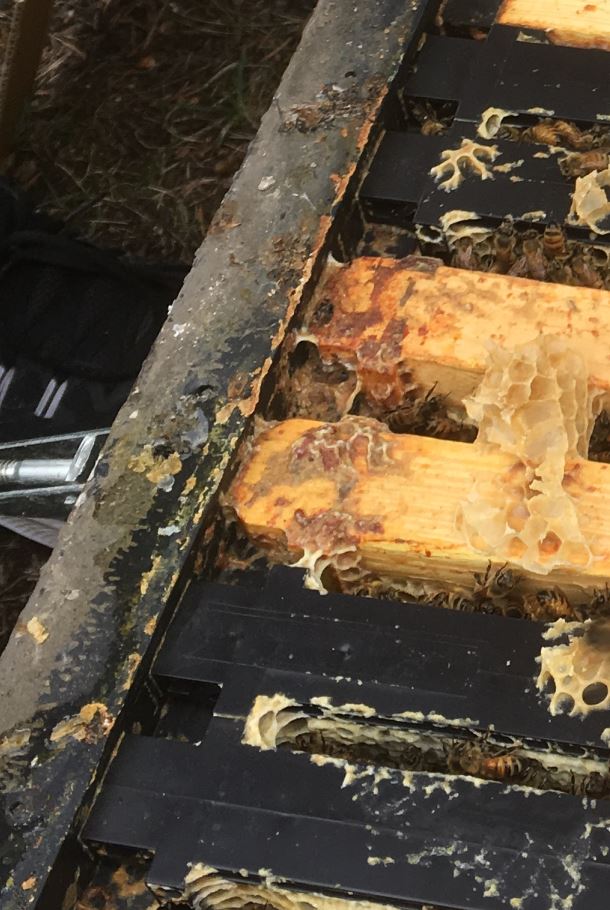 Frames fit too snuggly. Glued with wax and propolis, they are hard to pull loose.

I also had problems with birds and squirrels picking at the material. We have big black and grey squirrels living in the trees beside the hives. I caught one chewing on the hive. I don’t know if the poor girl was trying to sharpen her teeth, lining her home with polystyrene chips, or simply snacking on plastic.

The white area was eaten and exposed by critters.
You can see polystyrene ‘sawdust’ on the ground.

At $30 to $40 for each chamber, they are pricey. But winterizing material also costs money and I didn’t want to fuss with wrapping insulating material around my hives. I guess the bottom line is that I’m happy to use them again this winter. And I think they saved a hive that would have died last winter.

All wrapped for winter!
Snow atop a hive either means the hive is dead or the lid is well-insulated.
The polystyrene lids keep heat in the hives well.

Ron Miksha is a bee ecologist working at the University of Calgary. He is also a geophysicist and does a bit of science writing and blogging. Ron has worked as a radio broadcaster, a beekeeper, and Earth scientist. (Ask him about seismic waves.) He's based in Calgary, Alberta, Canada. Ron has written two books, dozens of magazine and journal articles, and complements his first book, Bad Beekeeping, with the blog at badbeekeepingblog.com. Ron wrote his most recent book, The Mountain Mystery, for everyone who has looked at a mountain and wondered what miracles of nature set it upon the landscape. For more about Ron, including some cool pictures taken when he was a teenager, please check Ron's site: miksha.com.
View all posts by Ron Miksha →
This entry was posted in Beekeeping, Hives and Combs, Tools and Gadgets and tagged Calgary, polystyrene, wintering bees. Bookmark the permalink.

34 Responses to Winter’s coming – are you insulated?