Have you lithium-chlorided your bees yet? 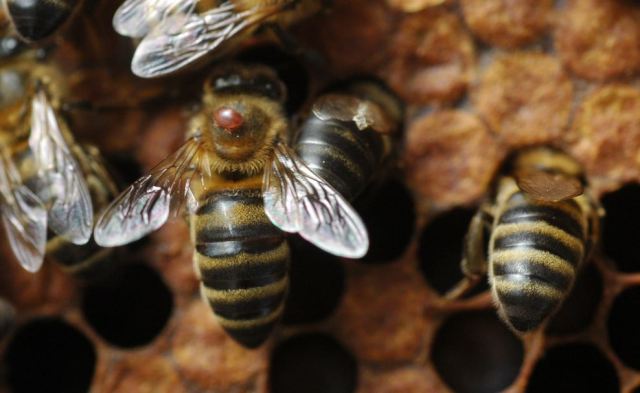 A friend (Thanks, Thomas!) sent a note this morning about a new mite treatment. It was developed at the University of Hohenheim, Apicultural State Institute, Stuttgart, Germany. Findings were published in Nature.  So, I am guessing that the science – as presented in the paper (Lithium chloride effectively kills the honey bee parasite Varroa destructor by a systemic mode of action), is probably solid.  Nature is offering the paper as “Open” which means that you can read it freely. So, take a look.

The researchers may be on to something.  Rather than fumigating an entire hive to kill varroa, bees uptake lithium salts. Later, when the mites suck honey bee haemolymph, they get poisoned.  (The research paper calls varroa the “haemolymph-sucking ectoparasitic” mite.)  This treatment is a different approach to controlling mites.

There may be some advantages.  If we feed a miticide to bees via sugar syrup, the hive contamination might be reduced. (Except, of course, if the bees are allowed to actually store the syrup!)  And, of course, this could be another tool in the battle against nasty ectoparasites.

A big drawback may be worker bee mortality, which increases significantly at LiCl doses high enough to be effective against mites. We don’t know what will happen in actual hive conditions.  With long-term feeding of lithium chloride to bees, the researchers tell us:

“…different concentrations of LiCl were continuously fed until the last caged bee died to investigate response to long-term exposure. Here, the treatment significantly reduced the average lifespan of freshly hatched worker bees from 26 days in the untreated control cages to 23 and 22 days for 2 mM and 10 mM LiCl, respectively (n = 60 bees, P = 0.024, log-rank test; Supplementary Table S6). In bees that received the highest concentration of 25 mM LiCl the lifespan was significantly reduced to 19 days on average (Fig. 3a).”

With this in mind, overdosing might be easy, resulting in dead bees.  Beekeepers will have to learn to curb their sloppiness. (Always a big problem.)

Lithium chloride is harsh. It’s used in industrial chemistry. It’s toxic to mites, bees, and beekeepers:  “Acute poisoning in man reported after 4 doses of 2 g each of lithium chloride, causing weakness, prostration, vertigo, and tinnitus.”  [To repeat:  Beekeepers will have to learn to curb their sloppiness. (Always a big problem.)]

However, I can see this – or something similar – developing into an effective treatment.  Maybe someone could correct me, but I don’t think we have any current treatment that works from the inside of the bee out (like lithium chloride does) but instead, all miticides work within the bees’ exterior environment (the hive).

For me, the concept is interesting. On the other hand, I’d keep my distance from lithium chloride. And, effective and clever as this idea might be, you are feeding bees a poison which then poisons varroa.   Though lithium chloride may have a role to play as other miticides lose their efficacy,  it makes sense to wait. Over time, will repeated use of lithium chloride kill your bees? Will it contaminate your equipment?  Have you lithium-chlorided your bees yet? I hope not.

Ron Miksha is a bee ecologist working at the University of Calgary. He is also a geophysicist and does a bit of science writing and blogging. Ron has worked as a radio broadcaster, a beekeeper, and Earth scientist. (Ask him about seismic waves.) He's based in Calgary, Alberta, Canada. Ron has written two books, dozens of magazine and journal articles, and complements his first book, Bad Beekeeping, with the blog at badbeekeepingblog.com. Ron wrote his most recent book, The Mountain Mystery, for everyone who has looked at a mountain and wondered what miracles of nature set it upon the landscape. For more about Ron, including some cool pictures taken when he was a teenager, please check Ron's site: miksha.com.
View all posts by Ron Miksha →
This entry was posted in Diseases and Pests, Save the Bees, Tools and Gadgets and tagged lithium chloride, varroa mites. Bookmark the permalink.

23 Responses to Have you lithium-chlorided your bees yet?