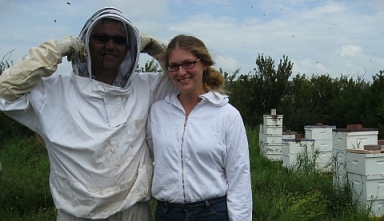 Son-in-Law and Daughter, Justin and Erika: The Next Generation

This year’s blog didn’t describe my own beekeeping very much. I wrote a little about other beekeepers. And I wrote a lot on thoughts and ideas I’ve had with bees in mind. But not much on the wholesome good fun of getting sticky with propolis, or feeling the warm glow that stings on the finger tips can give.

I didn’t write much about poking around in the bees because 2012 was the first year since 1970 that I didn’t manage a beekeeping outfit. I am sort of retired from commercial beekeeping.  I was 16 years old in 1970, freshly and dangerously armed with a driver’s license, given the keys to my family’s 300 hives of bees. I didn’t do well, but not badly, either. The weather was good and I ended that season with a hundred 60 pound tin cans of buckwheat honey and a couple drums from black locust, and many drums of fall honey – goldenrod and aster. Mostly goldenrod.

That year, the Pennsylvania fall flow from goldenrod and aster was great – I extracted thirty barrels in October. The deal with my father? I got to keep a third of all the honey to sell on my own. It was more than a good summer job for a young fellow who was clumsy and inept. And it was fun. I was severely bitten by the “bee bug” and decided to make bees my life. Soon I kept bees in Florida during the winters; Wisconsin in summer; Pennsylvania in autumn – learning from my father and my older brothers, who were skilled beekeepers. I learned queen rearing and I hauled bees into West Virginia apple orchards. But I liked the high plains of the west – and I wanted to be somewhere the rest of my family wasn’t.

Saskatchewan or Bust. I arrived in western Canada with an ancient truck, some rudimentary beekeeping skills, and a lot of enthusiasm, becoming a Canadian beekeeper at age 22. Saskatchewan had great conditions for beekeeping. Setting up in a cattle town called Val Marie, I ran a thousand hives and had a few good years – one summer getting over 300 pounds of honey per hive. It was remarkable. I was still clumsy and inept, had a lot to learn, but some of the hives each gave me 700 pounds of white thick clover honey. It was remarkable. After three or four years of walking on clouds, my luck ran out with the honey gods. A devastating drought destroyed the ranchers around me; my hives suddenly made nothing.

Good Beekeeping to Bad Beekeeping in just a few months. I sold most of my bees – kept just a couple hundred hives – and headed for university in Saskatoon. Four years later, I emerged from the greystone campus as a geophysicist, moved farther west, and found a place in the Rocky Mountain foothills to park a dozen hives of bees near my new home in Calgary.

For a dozen years, with a dozen hives, I was a hobby beekeeper. Then one of my older brothers decided to move to Canada. We began to build up a new small business. The thing grew to four or five hundred hives – all of them producing beautiful combs of honey – nothing extracted; just comb honey. We very tediously developed a market for comb honey – a great product that lots of consumers had never seen before and couldn’t seem to figure out. Surprisingly, they didn’t seem to know they needed it. But slowly, the market grew.

After a few years, my brother and his wife left Canada, mostly so they could live closer to their son back in the USA. The timing was good – the farm and business passed along to my daughter, Erika, and her husband, Justin. Erika is a dynamic marketer and quickly expanded the farm’s sales all around the world. She sold the entire crop her first year – she could have sold twice as much honey if the bees could produce it. So her husband will try to double the colony count next year and learn more about managing bees and business. They are a good team, keen and hard-working. The young people now running Summit Gardens Honey did well enough in 2012. With enough concentrated hard work (and good use of planning and time management), they may have a good future.

Ron Miksha is a bee ecologist working at the University of Calgary. He is also a geophysicist and does a bit of science writing and blogging. Ron has worked as a radio broadcaster, a beekeeper, and Earth scientist. (Ask him about seismic waves.) He's based in Calgary, Alberta, Canada. Ron has written two books, dozens of magazine and journal articles, and complements his first book, Bad Beekeeping, with the blog at badbeekeepingblog.com. Ron wrote his most recent book, The Mountain Mystery, for everyone who has looked at a mountain and wondered what miracles of nature set it upon the landscape. For more about Ron, including some cool pictures taken when he was a teenager, please check Ron's site: miksha.com.
View all posts by Ron Miksha →
This entry was posted in Beekeeping, Commercial Beekeeping and tagged Alberta, Pennsylvania, Saskatchewan, Summit Gardens. Bookmark the permalink.