I can’t even begin to imagine the clever wit that went into designing this revolutionary beehive. What you see to your right – if you are looking at the hive-gadget rather than the demonstrator – is a new hive design developed by Philips. Philips is the smart Dutch company that makes everything from water-jet dental flossers to coffee makers and electric shavers. They have classy stuff. Their website tells us that Royal Philips Electronics is a diversified health and well-being company, focused on improving people’s lives through timely innovations. Their focus is on “sense and simplicity.” The Philips design department apparently dreams up great product ideas for modern living – sleek designs for products that they will probably never sell. Like the Urban beehive.

A Philips team of design experts came up with this idea. “Why not keep bees in the kitchen?” someone probably asked during a brainstorming session. “Yes! Yes! And have a potted flower at the end of the bees’ tube so bees can crawl through the tube, then fly down to the flower, gather some nectar, then bring it back into the hive!” said a second brainstormer. The third brainstormer would have jumped from her chair, “And we’ll have a string that the owner can pull so honey will drip out of the hive!” The idea, of course, is nothing short of brilliant. But it can’t be patented – beekeepers have been pulling strings and squeezing honey from their hives for centuries already.

To help Philips promote their product, I want to let you read their own sales literature: (By the way, I don’t take anyone’s money, I do this all for fun.)

“The design of the beehive is unconventional, appealing, and respects the natural behavior of the bees. It consists of two parts: entry passage and flower pot outside, and glass vessel containing an array of honeycomb frames, inside. The glass shell filters light to let through the orange wavelength which bees use for sight. The frames are provided with a honeycomb texture for bees to build their wax cells on. Smoke can be released into the hive to calm the bees before it is opened, in keeping with established practice.

“This is a sustainable, environmentally friendly product concept that has direct educational effects. The city benefits from the pollination, and humans benefit from the honey and the therapeutic value of observing these fascinating creatures in action. As global bee colonies are in decline, this design contributes to the preservation of the species and encourages the return of the urban bee.” 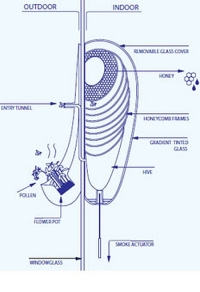 Did the ad department miss any buzz words? They mentioned natural, sustainable, environmentally friendly, therapeutic, and the (imaginary) global collapse of bee colonies. But will the hive actually work? What do you think? Observation hives work. This is the loveliest observation hive you can imagine – times ten! I like the design! I wonder if I could get 400 of these and put them in apartments and houses throughout Calgary? It would be such fun going from house to house, maybe dragging a little red wagon, and pulling all those strings while the honey drips out.

As you can see in the accompanying purple-coloured blueprints, the hive and flower pot are separated by an exterior house wall. The bees climb through the tube and find themselves outside where they could maybe work on more than a single potted flower. The only thing I can’t figure out is how the honey drips out the bottom when you pull the string. Chances are the designers of this hive have never actually kept bees or worked with honey combs. They will also be somewhat surprised to discover that when the hive is opened in the house, not only will the smoker set off the fire alarm, but the bees will be somewhat drawn to the kitchen lights and windows and the bees will, unfortunately, never, never, ever return to their hive. They will just hang out among the pots and pans. Other than that, it will probably work fine. But let me add this:

It is nice to see a big company such as Philips (one of the largest healthcare and electronics firms in the world) encouraging its designers, admen, and other folks to experiment, to think outside the (bee) box. Although this prototype will likely not be built, the training and learning and innovation involved are really laudatory. Seriously.

Ron Miksha is a bee ecologist working at the University of Calgary. He is also a geophysicist and does a bit of science writing and blogging. Ron has worked as a radio broadcaster, a beekeeper, and Earth scientist. (Ask him about seismic waves.) He's based in Calgary, Alberta, Canada. Ron has written two books, dozens of magazine and journal articles, and complements his first book, Bad Beekeeping, with the blog at badbeekeepingblog.com. Ron wrote his most recent book, The Mountain Mystery, for everyone who has looked at a mountain and wondered what miracles of nature set it upon the landscape. For more about Ron, including some cool pictures taken when he was a teenager, please check Ron's site: miksha.com.
View all posts by Ron Miksha →
This entry was posted in Culture, or lack thereof, Hives and Combs, Strange, Odd Stuff, Tools and Gadgets and tagged Urban beehive. Bookmark the permalink.

1 Response to An indoor hive