The Worker Who Would Be Queen

Bees have a complicated social structure which some political scientists have sought to embrace. In the old days, people assumed that the King Bee ruled with an iron fist that imposed order, harmony, sacrifice, and unflinching duty. Now that the curtain has been pulled back, we see that drugs do the trick of maintaining colonial order.

In the awkward honey bee society, there are two classes of female – queens and workers. If a queen unexpectedly dies, some workers lay eggs. But workers never mate, so their unfertilized eggs develop into males. I’m not sure what the point is – when a hive is dying from lack of a queen, the last thing the colony needs is a bunch of drones to feed. Why waste energy on drones? I’m sure that an evolutionary biologist could explain this better than I can, but my sense is that the drones – which are little more than cutely packaged gametes – are the dying colony’s last attempt to disperse some genetic material of their once flourishing civilization. The hive will die anyway, so why not scatter some seed to the wind?  You may have seen this in the plant kingdom – after an injury or a killing frost, an enfeebled orange or apple tree will sometimes have a ‘shock’ bloom. It looks pathetic. A sick, weak tree without leaves, but thrusting forth a few bouquets of pungent white flowers. Maybe fruit will grow before the plant dies, perpetuating the tree’s idea of perfect fruit – its own. 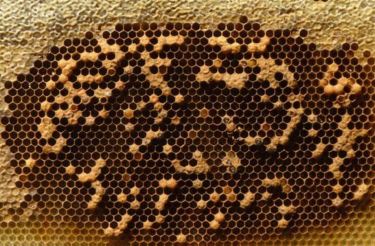 In the hive, the scene is no less pathetic. A queenless colony has a distinctly anxious hum and a disorganized assembly of bees that any experienced beekeeper recognizes immediately. Yet, workers who would be queens optimistically drop eggs into worker cells. Developing drone bees will warp the cells out of shape, squeezing their over-sized bodies into under-sized worker cells.

We have long known that the queen’s drugs force workers into placid acceptance of their unfertile state. Once absent, nothing represses the worker females. They begin laying their unfertilized eggs. The main drug – queen mandibular pheromone, or QMP, suppresses the workers’ egg laying. How and why QMP has this power was a mystery until a few days ago.

Notch signalling is degraded in the presence of QMP, resulting in maturation of eggs in a worker. If signalling is stopped, egg production can begin. Whether the signalling starts when the worker creates eggs or when those eggs begin to grow is not perfectly determined.

According to the research, it’s also not clear if the signalling is inhibited at the bee’s antennae, brain, or ovaries. Nevertheless, the study – published in the scholarly Nature Communications – shows that this protein signalling mechanism is the key to the worker bee’s ability to lay eggs: “…chemical inhibition of Notch signalling overcomes the repressive effect of queen pheromone. This promotes ovary activity in adult worker honeybees. The removal of the queen corresponds with a loss of Notch protein in the germarium…” This study is the first direct link of a molecular mechanism for ovary activity in adult worker bees with the presence of the queen.

The scientists say that understanding the mechanism that controls eusociality in honey bees (i.e., the caste system that allows one queen as sole reproducer and a supporting cast of suppressed workers) is important to evolutionary biologists seeking to determine when the caste system first began. The results of this research point to an early adaptation because the Notch signalling system is universal across the animal kingdom. It’s not determined from this, however, exactly when Notch was coerced into its unusual reverse role. I think eusociality’s evolutionary history will be determined in the fossil/amber record, not in biochemistry – but biology is not my long suit.

What’s in it for beekeepers?

To me, some of the supplementary data is more immediately interesting to beekeepers. To test their hypothesis, the scientists conducted experiments with adult worker bees by depriving them of QMP. In absence of the queen pheromone, they noticed that one-third of workers develop egg-laying capacity. In the presence of QMP, 5% of workers are not fully inhibited and can lay eggs. I wasn’t aware of either statistic and was surprised at how high these rates are.

If 5% of workers in a normal queen-right colony are able to lay eggs, do they? That could mean thousands of laying workers in a queen-right hive. Well, in addition to the eusocial biological control (fully developed mated queen vs unfertilized laying workers), the bees have mechanisms in place to deal with errant egg laying. Most worker-laid eggs are disposed by house-keeping bees. As queen pheromones would not be present in eggs laid by workers, other bees treat the eggs as they would treat any bits of garbage.

The other statistic – one-third of workers in queenless, broodless hives can be laying workers, is equally surprising.  I had previously assumed that “a few” workers in a queenless hive become laying workers. My assumption was based on the evidence that I’d seen – rarely are there more than a few hundred worker eggs in a depleted queenless hive. So, my hunch was that ovarian development among workers wasn’t common, even in a fully queenless hive. But the journal paper tells us that “In a queen-less environment, if there is no opportunity to make another queen, approximately one-third of honeybee workers activate their ovaries and lay eggs. These eggs are unfertilized and haploid, and they generate fertile male offspring.”

Eggs produced by laying workers. You will rarely see such dramatic production, but multiple eggs in single cells, and cells glued to cell walls instead of bottoms, is common.
Photo by Michael Palmer/Beesource.com

One-third is a remarkable number. This enlightens the challenge beekeepers face when trying to establish a queen in a hive which has laying workers. Our standard advice is to move the boxes a few metres from the old stand and shake all the workers from the combs. Most laying workers will remain a few metres from the old spot and will not fly back. At the old location, you may reuse the equipment and add some young bees, some brood, and a queen. You won’t always be successful, but you’ve increased your odds of re-queening success from nearly zero to perhaps 70 or 80 percent.

Ron Miksha is a bee ecologist working at the University of Calgary. He is also a geophysicist and does a bit of science writing and blogging. Ron has worked as a radio broadcaster, a beekeeper, and Earth scientist. (Ask him about seismic waves.) He's based in Calgary, Alberta, Canada.
View all posts by Ron Miksha →
This entry was posted in Bee Biology, Genetics, Queens, Science and tagged drones, eusociality, laying workers, pheromones, queen substance, queenless hives. Bookmark the permalink.

5 Responses to The Worker Who Would Be Queen