Today is the last day of winter in the northern hemisphere. But the temperature – here in Calgary, at least – feels spring-like. It’s been in the mid-teens (60° F) for a few days. It’s the first chance for many of us to assess the damages caused by this extended winter. (February was painfully awful. Then it fell to minus 31° here in early March.)

We won’t have nectar and pollen for another month, so we’ll feed our backyard colonies. When I peeked at the bees on an atypically mild day in mid-January, I discovered weak colonies with bees already clustered on the top bars.  In January, you expect the bees to have honey, not air, above their winter cluster. We mixed up some fondant to try to keep starvation away. It seemed to work. Today, the colonies are still alive.

You may be feeding liquids by now, if your weather is mild, but when it’s cold, hard-candy is the better option. When I kept bees in Florida, fondant (or its near-cousin, candy boards) were a quick and easy way to feed and stimulate colonies in January and February, ahead of queen-breeding and citrus-blossom season. It was never particularly cold, yet we avoided the mess of sticky syrup, which could lead to robbing. Even the most careful beekeeper might end up with wild, destructive robbing – which happened to a chap I knew named James. He had bought gallon-sized canning jars, filled them with syrup, inverted them atop small holes drilled into his plywood lids, and let the bees take down the feed in one of his backwoods beeyards that stretched along the edge of an orange grove. He came back a few days later and discovered that someone had made sport of all his big glass jars – target practicing with a pistol. Thirty jars were shattered, the syrup was gone, and his apiary was rife with robbing.  James switched to hard candy feed.

It’s getting late in the season to feed fondant and we will switch to division-board feeders, tucked out of sight inside the hives. But if you’d like instructions for feeding the hard candy, here’s what we did in mid-January this year to keep our two errant colonies alive.

Basic Fondant Recipe:
4 pounds of sugar
2 cups of water
1 teaspoon of vinegar
Heat to 235º F
Cool to 180º F
Stir until it turns white and creamy
Pour and chill in pie pans
Serves up to 15,000 guests

You’ll find that it takes a long time to get the temperature up to 235º F. I used a cheap infrared, hand-held thermo-gun to monitor the heat. Twenty minutes later, the slurry was hot enough. Why is vinegar in the recipe? It’s supposed to help break sucrose molecules into glucose and fructose. Better for bees’ digestion.

On the stove for 20 minutes.

Then, we cooled it to about 180º and dumped the stuff into a Mix Master. 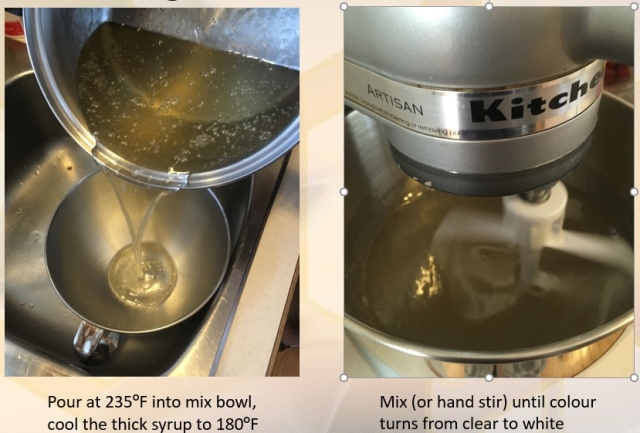 It goes from almost clear to the white taffy-like candy below. We poured it into pie pans. 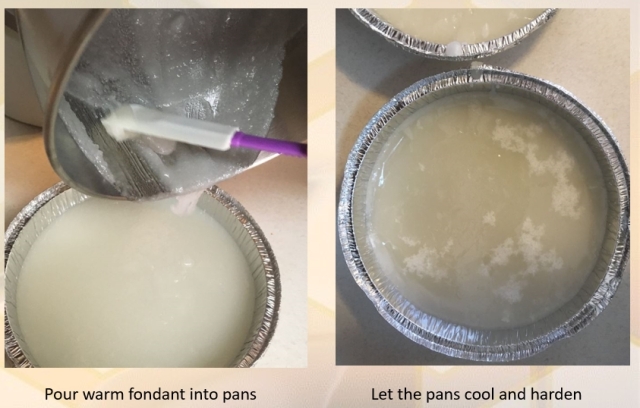 When it cools, it shrinks a little and comes out of the pan in one nice solid piece.

It took about 30 minutes to make 8 pounds of this fondant. We served it the same day it was made, but that’s not necessary. I’m sure that this kept the bees alive during the weeks of bitterly cold weather we had from late January to mid-March. There was some honey in the hives but nothing directly above the cluster.

Here’s a picture of what the bees looked like last week. It looks like quite a bit of the feed is left, but the food has been eaten from underneath, leaving the nice round upper surface and not much else.

Ron Miksha is a bee ecologist working at the University of Calgary. He is also a geophysicist and does a bit of science writing and blogging. Ron has worked as a radio broadcaster, a beekeeper, and Earth scientist. (Ask him about seismic waves.) He's based in Calgary, Alberta, Canada.
View all posts by Ron Miksha →
This entry was posted in Beekeeping, Tools and Gadgets and tagged feeding bees, fondant, wintering. Bookmark the permalink.