Laying worker, new queen, or both?

Following on yesterday’s post about laying workers, I thought I should add this important caveat.  If you have a new queen (from a split which was given a young caged queen, for example), you may occasionally find multiple eggs in a few cells.  If you are sure you have a young queen (you’ve seen her), then don’t destroy the hive in the way you’d handle an actual laying worker hive.

Check that the young queen is present and eggs are attached to cell bottoms, not on cell sides. My friend Robert McBain of Worker and Hive Bee Supply sent this photo. He told me that it’s from a hive with a new queen, not a hive completely over-run by laying workers.  He’s probably right. 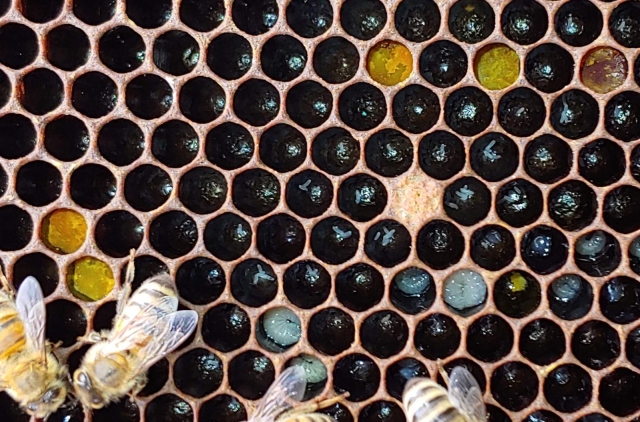 I used to see the occasional multi-egged cells in mating nucs when I was raising queens. I don’t know if the odd laying worker was active in the nuc (there are always many laying workers present, even in queen-right colonies), or if it was simply the work of a young queen still learning how to count to ‘one’ – either way, the issue always cleared up in a week and the new queen did just fine.

Ron Miksha is a bee ecologist working at the University of Calgary. He is also a geophysicist and does a bit of science writing and blogging. Ron has worked as a radio broadcaster, a beekeeper, and Earth scientist. (Ask him about seismic waves.) He's based in Calgary, Alberta, Canada. Ron has written two books, dozens of magazine and journal articles, and complements his first book, Bad Beekeeping, with the blog at badbeekeepingblog.com. Ron wrote his most recent book, The Mountain Mystery, for everyone who has looked at a mountain and wondered what miracles of nature set it upon the landscape. For more about Ron, including some cool pictures taken when he was a teenager, please check Ron's site: miksha.com.
View all posts by Ron Miksha →
This entry was posted in Bee Biology, Beekeeping, Queens and tagged laying workers, queen breeding. Bookmark the permalink.

5 Responses to Laying worker, new queen, or both?