You thought bees were vegetarians? 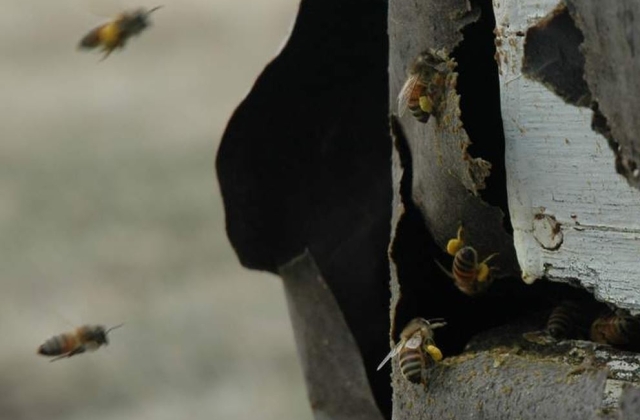 These bees are arriving with more than vegetables. (Photo: Miksha)

Well, looks like another sacred truth has been shattered. Bees eat beefy little microbes as part of their regular diet. Never again will I stand in front of a class of new beekeepers and implore them to marvel at the wonderful fact that bees get all their nutrition from flowers: carbohydrates from nectar; protein (and vitamins and minerals) from pollen. Apparently, the “meat” of microorganisms also makes up an important part of a bee’s lunch.

I was just getting over the unrelated bacterial facts that (1) our bodies contain ten bacteria for each human cell; and, (2) bacteria thrive in oppressive heat and pressure kilometres below the Earth’s surface. Well, if they are everywhere, and if they exist in nearly infinite numbers, I guess our bees couldn’t avoid eating a few.

But this Scientific American magazine article, reporting on this bit of research, suggests that bees actually need the meat that microbes provide. They seek it out. If you keep bees long enough, you’ll believe almost anything about them. Many of us have seen how a starving colony of honey bees will cannibalize its brood (eating the youngest first). It’s a dirty little secret that we don’t share in public (except on bee blogs). Bees were never strictly vegetarians, and we knew it all along. But bee cannibalism is one of those things we can accept – the brood was going to die anyway and maybe the colony will survive. Sort of like eating the seed corn during a deep famine, or participating in the Donner Expedition. But this latest news is new and unsettling. For me at least.

Dr Dharampal, U of Wisc.

Prarthana Dharampal and Shawn Steffan, both at the Madison branch of the University of Wisconsin, found that bees eat enough microbes to qualify as omnivores – animals that consume both plants and animals. In fact, Dharampal speculates that bees who are collecting pollen may actually be foraging for microbes – a good place to find micro-organisms is pollen. If this theory is substantiated, my head will hurt adjusting to another new reality.

Part of the University of Wisconsin team’s experiments included feeding sterilized pollen to mason bee larvae. A control group of bees received regular, microbe-contaminated pollen. The larvae fed sterile pollen ate the same pollen with its array of lipids and vitamins and minerals, but with none of the ‘germs’. The larvae that were fed the ‘clean’ food soon died.

But wait – there’s more.  Some are speculating that the damage we are unintentionally doing to the environment is killing the nutritious microbes that live on plants that are visited by bees. Is this yet another factor making life unlivable for bees?

Ron Miksha is a bee ecologist working at the University of Calgary. He is also a geophysicist and does a bit of science writing and blogging. Ron has worked as a radio broadcaster, a beekeeper, and Earth scientist. (Ask him about seismic waves.) He's based in Calgary, Alberta, Canada.
View all posts by Ron Miksha →
This entry was posted in Bee Biology, Diseases and Pests, Ecology, Pesticides, Save the Bees, Science and tagged bee nutrition, microbes, pollen. Bookmark the permalink.

3 Responses to You thought bees were vegetarians?