Good news: the indigenous black honey bee is making a come-back. The native honey bee was deemed extinct in some parts of Ireland, but in 2012, researchers found it in various pockets in Ireland and throughout the British Isles – Londonderry, Isle of Man, Lancashire, even West Sussex where some say almost nothing survives. The black bees (Apis mellifera mellifera) are claimed to be better suited to the UK’s cool wet dark climate than the more common commercial bee, the Italian (Apis mellifera linguistica) which evolved in the warm dry sunny climate south of the Alps and north of Sicily.

I have had a couple of great opportunities to see these famous black bees. When I was a kid, I helped a farmer (State Senator Bill Graham) in South Carolina sort through his bees. In a shady pine grove, he had two hives that hadn’t been touched in years, he said. They were thriving. I was amazed at how dark the bees were. And runny. They flowed like water around the frame, off it, over my hands, down into the deep super below. It was impossible to find the queen among these flighty insects. These were descendants of America’s original European bees and they were rare. I knew of only those few hives down along the Great Pee Dee River. I doubt that many of those original settler-bees can be found today anywhere in America.

My other opportunity to see black Apis mellifera mellifera bees came years later, in 2005, when Ireland hosted Apimondia. My daughter and I boarded a bus for the Galtee Queen Breeding Group’s station tour. The bees were as black as advertised. But much calmer than the ones I’d seen in the southern USA. These bees stayed on the combs. It wasn’t clear to me if these bees were being reared because they are ‘better’ at surviving, pollinating, or honey-producing, or if this was a cultural exercise to maintain a particularly Irish bee. Maybe both. 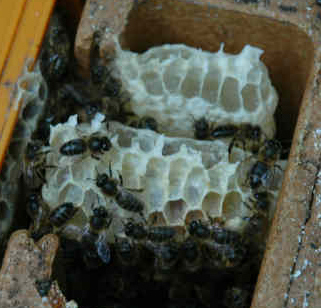 Ron Miksha is a bee ecologist working at the University of Calgary. He is also a geophysicist and does a bit of science writing and blogging. Ron has worked as a radio broadcaster, a beekeeper, and Earth scientist. (Ask him about seismic waves.) He's based in Calgary, Alberta, Canada.
View all posts by Ron Miksha →
This entry was posted in Beekeeping, Genetics, Travels and tagged Apis mellifera mellifera, black bees, Galtee Queen Breeding, Ireland, Senator Bill Graham, South Carolina. Bookmark the permalink.