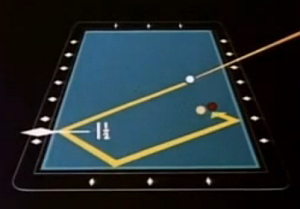 Figuring out all the angles.

Lining up the Hives. The University of Essex (England) Mathematics Department has teamed up with a software designer to create an app that may help beekeepers and orchard owners maximize pollination in orchards. The venture, code named “Project Beeswax” even caught the attention of the TED Talks group of brainiacs. The mathematician behind the project, Dr Abdel Salhi, is testing the feasibility of mathematical optimization theory to estimate the minimum number and the best distribution of beehives in an orchard to achieve effective pollination of apple trees.

Researchers have been out at a local orchard to investigate configuration ideas that may help with developing their mathematical models. The first phase of this study will be completed near the end of March 2013. Chief mathemagician, Dr Salhi, said “I was excited to undertake this project because it seems an ideal area to deploy mathematical methods of optimisation. The underlying problem is potentially very tricky to solve. However, good approximate solutions will be very rewarding indeed. It is also a good opportunity to work with the local farming community.”

Money (about $7700) was granted by the Technology Strategy Board to help Andrew Lewis of Simul Systems Ltd. develop the app for tablets, desktops and laptops. If successful, it will reduce the number of hives orchard growers must rent from beekeepers. Wouldn’t it be nice if beekeepers could be paid to haul in just 8 hives to a 4-acre grove, instead of 16? A lot less handling of hives, fewer stings, and less annoying money to deal with.

Ron Miksha is a bee ecologist working at the University of Calgary. He is also a geophysicist and does a bit of science writing and blogging. Ron has worked as a radio broadcaster, a beekeeper, and Earth scientist. (Ask him about seismic waves.) He's based in Calgary, Alberta, Canada. Ron has written two books, dozens of magazine and journal articles, and complements his first book, Bad Beekeeping, with the blog at badbeekeepingblog.com. Ron wrote his most recent book, The Mountain Mystery, for everyone who has looked at a mountain and wondered what miracles of nature set it upon the landscape. For more about Ron, including some cool pictures taken when he was a teenager, please check Ron's site: miksha.com.
View all posts by Ron Miksha →
This entry was posted in Pollination, Science and tagged Abdel Salhi, Project Beeswax, TED Talks. Bookmark the permalink.