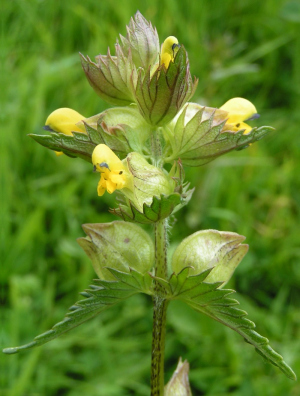 Charles Darwin was a famous geologist before he published his revolutionary evolutionary treatise. He was also a well-rounded naturalist. It was Charles Darwin who discovered that some bumblebee species gnaw into the side of deep-throated flowers, cheating their pollination obligation. These are short-tongued bees. Their excuse is that they can’t reach the nectar, so they steal. The consequence is the flower loses its nectar without the benefit of pollination. (There are other bees, long-tongued sorts, who later correct the damage, so the flower can reseed.) Flowers have been trading food for pollination services with the animal kingdom for at least 100 million years. Darwin realized that the robber bee’s activity was not within the usual evolutionary scheme. Although the flower may have evolved deeper and deeper tubes while a compatible bee evolved a longer and longer tongue, neither expected an interloper to wonder onto the scene, perhaps blown in by a windstorm many generations earlier. With enough time, the flower may develop a toxic base to discourage theft. When Darwin discovered this bad bee habit – and wrote about it in a naturalist journal – he recognized, correctly, that the bee’s behaviour was learned, not inherited.

Recently, bumblebee expert David Goulson added to Darwin’s discovery. Goulson, at Britain’s University of Sussex, spent a couple of summers with his assistants in Switzerland. There they tracked bumblebees amid alpine flowers called yellow rattle, which hides its nectar deeply. Their observations took them to 13 different mountain meadows where they spotted the bumblebees and discreetly followed them, like undercover cops witnessing crimes. After each bee was seen robbing 20 flowers, a profile was written up and filed. As it turned out, novice bumblebees watch experienced burglars – and learn their techniques. They inferred this from the fact that most bees in the meadow poke holes into the same side of the yellow flower’s base, either right or left; not both, and not randomly. If you look at the picture, above, you can see that the flowers are rather tight to the stem. From an observer’s vantage, the right side is obvious. Although there is no advantage in selecting the right (or the left) for drilling, biting, and poking through to reach the nectar, the bumblebees tend to always work the same side as other bees are working. And it may change the following year, when everyone pokes left, for example. And it can vary from meadow to meadow. The point is, some original thief makes a choice each year, sticks with it, and everyone else copies. Learned behaviour at its finest.

Ron Miksha is a bee ecologist working at the University of Calgary. He is also a geophysicist and does a bit of science writing and blogging. Ron has worked as a radio broadcaster, a beekeeper, and Earth scientist. (Ask him about seismic waves.) He's based in Calgary, Alberta, Canada. Ron has written two books, dozens of magazine and journal articles, and complements his first book, Bad Beekeeping, with the blog at badbeekeepingblog.com. Ron wrote his most recent book, The Mountain Mystery, for everyone who has looked at a mountain and wondered what miracles of nature set it upon the landscape. For more about Ron, including some cool pictures taken when he was a teenager, please check Ron's site: miksha.com.
View all posts by Ron Miksha →
This entry was posted in History, People, Pollination, Science and tagged Charles Darwin, evolution, yellow rattle. Bookmark the permalink.