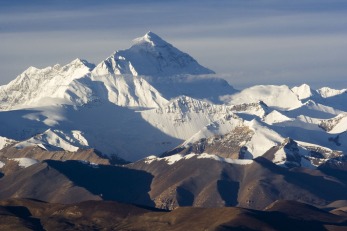 Today is the 60th Anniversary of The Conquest of Everest. It was 1953, Queen Elizabeth was just about to begin her first day on the job as queen of the world’s imperial empire. In 1953, a typical TV was a box bigger than the average ‘fridge. And it took 3 days before the world knew whether Edmund Hillary and Tenzing Norgay had climbed the peak of the mighty mountain, had died trying. Everest, named for a British Tea Company surveyor, had been attempted before Hillary and Tenzing, but all previous efforts ended in tragedy. As ABC news said today: “Sixty years ago, on May 29, 1953, a New Zealand beekeeper and a Nepali sherpa reached the peak of Mount Everest in Nepal.”

Yes, Sir Edmund Hillary was a New Zealand beekeeper. Not the backyard, one hive under an apple tree sort of beekeeper, but a real-life honey farmer. And for a few seasons after his famous conquest, he went back to tending the 1,400 colonies scattered around his island home. At the time, he didn’t think the climb was a big deal and he expected his moment of glory to fade quickly. It didn’t.

Hillary climbed Everest in 1953. Off season, he continued exploring remote corners of the Earth – in 1959, he wrote a book about his discoveries in Antarctica. 1959 was also the last year he was a commercial beekeeper. Here, from his book A View from the Summit are Hillary’s own words about his beekeeping experiences: “My brother Rex was a year younger than me and he, too, was part of our family beekeeping business. Rex and I worked well together as a team. He was smaller than me but very strong and vigorous. In the friendliest fashion we competed energetically with each other, often running side by side with heavy loads of honey to pile them on our truck…we actually enjoyed the beekeeping. Our thirty-five apiaries were spread out on fertile dairy farms up to forty miles away, so we were always on the move. The spring and summer, when the bees were gathering nectar, was a time of great excitement. The weather made beekeeping a tremendous gamble, of course. Each apiary we visited could have a substantial crop of honey in its hives or almost nothing. Rex and I reveled in the hard work.”

Ron Miksha is a bee ecologist working at the University of Calgary. He is also a geophysicist and does a bit of science writing and blogging. Ron has worked as a radio broadcaster, a beekeeper, and Earth scientist. (Ask him about seismic waves.) He's based in Calgary, Alberta, Canada. Ron has written two books, dozens of magazine and journal articles, and complements his first book, Bad Beekeeping, with the blog at badbeekeepingblog.com. Ron wrote his most recent book, The Mountain Mystery, for everyone who has looked at a mountain and wondered what miracles of nature set it upon the landscape. For more about Ron, including some cool pictures taken when he was a teenager, please check Ron's site: miksha.com.
View all posts by Ron Miksha →
This entry was posted in Beekeeping, Commercial Beekeeping, History, People, Strange, Odd Stuff and tagged Mount Everest, New Zealand, Sir Edmund Hillary, Tenzing Norgay. Bookmark the permalink.