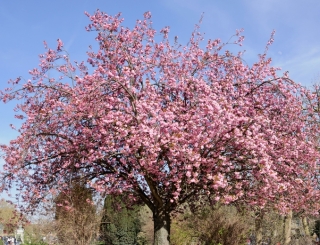 California almond pollination season is finished. And so are many of the bees which made the trip to the west coast to participate in the largest honey bee mosh pit ever in the history of beekeeping. (For those of you over 30, I’ll define mosh pit: “The controlled violence of a mindless jumble of enthralled dancers and screamers (usually experiencing a buzz) participating in a large mutually attractive event.”

Mosh pits typically occur at concerts, but California’s honey bee mosh pit includes a beehive staging area where hundreds of thousands of colonies are off-loaded from semi-trucks arriving from New York, North Carolina, the Dakotas, and perhaps every state except Alaska and Hawaii.

The beekeepers, enticed by pollination fees now approaching $200 per hive, send the little buzzers via big trucks in December or January, parking them in huge apiaries (some ‘beeyards’ contain ten thousand hives on a few acres) where the bees are fed sugar syrup and pollen substitutes to keep them alive until the almonds blossom. The flowers usually open in February and the beekeepers again load the bees and move them into the groves. Since most of the pollinator bees are arriving from colder climates, the California sunshine excites them, the queen lays lots of eggs, the workers head out looking for flowers (they don’t find man), and the beekeeper feeds the colonies to encourage the insects’ population growth. The unnatural diet and close proximity to millions of neighbour bees is a bit rough on them. So are the insecticides sprayed around California’s countryside.

This year, beekeepers claim a quarter of all their honey bees died during almond pollination season. The direct cause seems to be insecticides, not malnourishment or overcrowded conditions. Increasingly, something called a “toxic tank” of poisons have been blamed. Most almond groves are controlled by enormous agribusinesses, not ma-and-pa growers. These farm corporations have been accused of mixing multiple toxins in a delicious cocktail that includes neonictinoids, fungicides, and various pesticides. Mixing such a toxic blend, instead of targeting specific problems with single passes, saves time and money. But it also escalates honey bee deaths. During the 2014 pollination season, an estimated 17,000,000,000 (17 billion) bees died from the sprays.

Sticking with the grim economics, that would be about 400,000 colonies at a cost of $200 each, an eighty-million dollar value. OK, in today’s economy, that is admittedly pocket change. But 400,000 hives have quite a multiplier effect: they add one billion dollars to the almond producer’s crop, then the same bees (if they hadn’t been killed) would travel to pollinate blueberries, cherries, apples, cukes, melons, and squash, where, if they were undead, they would have given consumers another four billion dollars worth of food. Many of the beekeepers who lost bees in California will not return to pollinate almonds next year – they have had enough death and destruction to last their lifetimes.

Lawsuits have been launched. Not so much against farm corporations, though that has been happening, but, significantly, the Environmental Protection Agency has had a legal notice of complaint filed against it. Beekeepers and environmentalists allege the watchdog has not done enough to test and regulate poisons, educate farmers, or protect bees. Specifically, the lawsuit claims that in “a vast and extremely risky experiment, EPA has allowed over two million pounds of clothianidin and thiamethoxam to be used annually on more than 100 million acres and on dozens of different plant crops without adhering to existing procedural frameworks and with no adequate risk assessments in place.” The plaintiffs also allege that the EPA approved the chemicals “without affording notice in the Federal Register and the opportunity for public comment, in violation of the FIFRA and the APA.”

Perhaps you are thinking the people who are suing the government for their lack of protection are a bunch of bleeding-heart liberals and wild-eyed environmentalists. Think again. The key plaintiffs include beekeeper Bill Rhodes, a former professional football player from central Florida, a gentleman I knew when I kept bees there some years ago. In those days, I saw Bill retire after two seasons with the Canadian Football League (which followed some outstanding years as a lineman at Florida State) and then Bill bought 50 hives, which he expanded to 400. Thirty years later, Bill Rhodes owns and operates 8,000 colonies. With his family, he also farms in Florida and Georgia. Bill is not a wild-eyed anything. He is practical, realistic, and he works very, very hard.

Many of us libertarian types are beginning to rethink our politics. We generally favor being left alone. We don’t think any government should control how we live, the people we live with, or what we do at home. We don’t want to pay high taxes so corporate welfare porkies can take salaries of ten million dollars funnelled to them through government subsidies. We have insisted on a lean mean government, but our carefully purchased politicians have cut only those things least likely to bite their fingers – the EPA, created by Nixon in 1970, has especially taken a hit. We have encouraged everyone – including agribusiness – to do whatever they want. Meanwhile, by insisting on trimming government spending, we have snipped the courage and funding from the Environmental Protection Agency, resulting in a toothless tiger that barely purrs. It now has neither the manpower nor the regulations to stop the incessant pollution and the persistent destruction defacing the landscape and slaughtering the bees.

Ron Miksha is a bee ecologist working at the University of Calgary. He is also a geophysicist and does a bit of science writing and blogging. Ron has worked as a radio broadcaster, a beekeeper, and Earth scientist. (Ask him about seismic waves.) He's based in Calgary, Alberta, Canada. Ron has written two books, dozens of magazine and journal articles, and complements his first book, Bad Beekeeping, with the blog at badbeekeepingblog.com. Ron wrote his most recent book, The Mountain Mystery, for everyone who has looked at a mountain and wondered what miracles of nature set it upon the landscape. For more about Ron, including some cool pictures taken when he was a teenager, please check Ron's site: miksha.com.
View all posts by Ron Miksha →
This entry was posted in Beekeeping, Ecology, Pesticides, Pollination and tagged almond pollination, EPA, lawsuits, migratory beekeeping, neonicotinoids. Bookmark the permalink.