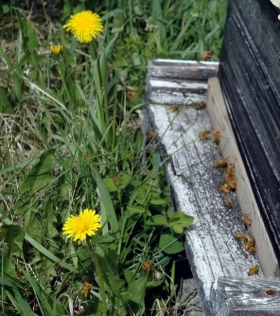 For three weeks, my 7-year-old daughter has been counting dandelions nearly every day. There is a large field behind our house, a city meadow of sorts. From mid-May to early June, our meadow likes to show a bit of yellow. My daughter began her list May 12th when 4 dandelions were in flower. Her numbers increased irregularly with dozens appearing in a few days, then several hundred. By the 25th of May, the blossoming dandelions were like stars on a clear night – too numerous to count. Then suddenly the yellow turned to white as heads of seeds appeared. So now, at the end of the first week of June, they are rapidly disappearing. The number of open flowers depends on heat and rainfall. It has been cooler than normal (or maybe more normal than normal – we were getting used to hot springs). With mild weather, the dandelions lasted a bit longer this year than they have during our past few springs.

Dandelions are great. The beekeeper’s friend. They are native to Europe, Asia, and the Americas, so before honey bees arrived here in the 1600s, they must have been a fantastic feast for the wild bees. Honey bees love the showy little flowers – for most northern-hemisphere beekeepers, dandelions are the first really big meal of the honey season. After the first flush of crocus, willow, and maple, which bloom when the weather is still cool and unstable, the “lion’s teeth” as the French named our “dent-de-lion” are welcome for their enormous yields of pollen and nectar. I have seen bees store 20 kilos (40 pounds) of honey in just two peak weeks of flow. I’ve also seen relatively weak hives explode in population. Dandelion season, you see, is also the real beginning of swarm season. Hope your neighbourhood bees have had their fill from this under-rated weed. And hope they have resisted their natural temptation to flee to the trees!

Ron Miksha is a bee ecologist working at the University of Calgary. He is also a geophysicist and does a bit of science writing and blogging. Ron has worked as a radio broadcaster, a beekeeper, and Earth scientist. (Ask him about seismic waves.) He's based in Calgary, Alberta, Canada.
View all posts by Ron Miksha →
This entry was posted in Honey Plants and tagged dandelions. Bookmark the permalink.