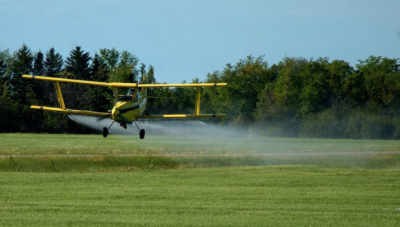 You know what they say about new technology – someone always finds a way to put it to nasty use. Combine airplanes and chemicals, and what could possibly go wrong? Let’s fly back to 1921 and visit a grove of catalpas covered in Sphynx moth caterpillars. They are dead now, mostly because 1921 was nearly a hundred years ago and worms don’t live that long. But it did little for their longevity that the 6-acre grove of trees they once feasted upon was assaulted by lead arsenic from the air. It was the world’s first aerial dust application, the birth of crop dusting. It was hugely successful according to the Cleveland, Ohio, entomologist who suggested the scheme. The dusting killed all the bugs. All of them. And probably some rabbits and deer, too. And added to the arsenal used to slaughter bees.

The slaughter continues. A year ago, I posted a blog entry about bees killed in Florida by poisons used by one on the state’s largest citrus companies. I sent two e-mails to Florida’s Natural marketing cooperative, asking their representative how they felt about having one of their members found guilty of violating state law. That was a year ago. They did not respond to my e-mail.

A bee-kill decision in Florida. According to Palm Beach’s The Ledger, beekeepers Barry Hart and Randall Foti lost $390,000 worth of bees and honey production when one of Florida’s largest citrus producers sprayed pesticides. (The loss does not seem exaggerated. For example, Foti’s honey production was off by 200 drums of orange blossom honey and millions of dead bees were piled in front of his hives.) According to a Florida state investigation, the spraying was illegal. The grower, Ben Hill Griffin Inc, was ordered to pay a fine. Of $1,500. That’s the fine?? Destroy two beekeepers, pay $1,500? It would be bad enough if the pesticide use had been legal and all those bees were killed. But $1,500 for an illegal application of poison resulting in this sort of damage? This sends the signal that one might spray whenever and however it best suits the grower, then shell out the trivial fine. The state pointed out that the maximum fine is $10,000 per instance of abuse. The state says pesticide laws were violated by Ben Hill Griffin Inc on February 21, February 22, March 8, and March 19, 2013. That would sort of indicate four violations and up to $40,000 in fines. According to one of the beekeepers, Randall Foti, every four days they were spraying where his bees were working. The insecticide application occurred while the orange trees were in full bloom. Millions of bees died.

This is all very interesting, but, as it turns out, there is much more to this story. The company accused of using the pesticides is a green, natural citrus grower, indicates Florida’s Natural Growers, a marketing cooperative. The fellow in charge is a fourth-generation grower – apparently a gentleman with a deep love for the environment, for the aquifer, for wildlife. According to Florida’s Natural website, the groves’ operator, Ben Hill Griffin IV, “prides his grove operation on environmental stewardship, as it helps to recharge the aquifer, generate oxygen, and provide a home for an abundance of wildlife. Many of the family’s decisions in the groves are made to accommodate both the health of the citrus trees and the land they grow from.” I could almost hear frogs croaking and birds tweeting as I read about the way oranges are grown by Ben Hill Griffin Inc. What I read were all very nice words and who can doubt what Florida’s Natural Co-op says? Certainly not I. So, I wrote to Florida’s Natural and asked how the company that stands accused by the state of Florida (and is ordered to pay the pittance of a fine) fits with the Florida’s Natural brand. Natural, right? If they write back, I’ll amend this blog entry with their information.

In reading the family biography and the Ben Hill Griffin company details on the Florida’s Natural website, I felt compassion for the corporation. They love the land. They must be heart-broken about the tragedy they have apparently caused. They have a fleet of pickup trucks painted in “Griffin Green.” Green. The clean color. The present owner started in the family business at age 11, “working with the baby trees in the family nursery.” Sigh. But Ben Hill Griffin Inc is a huge corporation. The University of Florida’s football stadium is named after the founder of that huge corporation. Ben Hill Griffin Jr, now deceased, was majority share holder of a company that owned the land the Atlantic Coast Line Railroad was built on – and various sugarcane, citrus, cattle, forestry, and sod farms. He was on the Forbes List of richest Americans. When he died, his $300,000,000 estate was bitterly contested in court by his four daughters who seemed to feel the one son (Ben Hill Griffin III), who was the sole trustee, had grabbed the bulk of the money, according to the Orlando Sentinel. In the newspaper’s story “Drama Ends With Heirs Splitting Citrus Millions,” they describe the fight as tabloid stuff: “The closet door swung open and out fell the skeletons…” This is not your average grove-owning family. Among Griffin Jr’s grandchildren are several Republican politicians. You might remember Katherine Harris, a Griffin granddaughter, who was Florida Secretary of State in 2000 when the ‘hanging chad’ issue contributed to George Bush’s election. Other members of the family have been in the Florida Senate and House. This is a powerful family. So it is really reassuring that their company is so anxious to do good things for the environment.

Beekeeper Foti has said that he saw empty containers of Montana 2F insecticide in a burn pile in the groves. If this is true, what does it say about one’s love for aquifers, the land, the wildlife? Or maybe empty canisters of Imidacloprid stacked in a burning pile are OK? I have read Montana 2F’s label. Surprisingly, yes, old containers may be burned if so allowed by the state, but the label also warns: “If burned, stay out of the smoke.” Always good advice. Stay out of the smoke. The label also says:

In issuing its fine the Florida regulators also said that in using insecticides, “The label is the law.”

Ron Miksha is a bee ecologist working at the University of Calgary. He is also a geophysicist and does a bit of science writing and blogging. Ron has worked as a radio broadcaster, a beekeeper, and Earth scientist. (Ask him about seismic waves.) He's based in Calgary, Alberta, Canada.
View all posts by Ron Miksha →
This entry was posted in Diseases and Pests, Ecology, History, Pesticides and tagged citrus, Florida, Florida's Natural, poisoned bees. Bookmark the permalink.