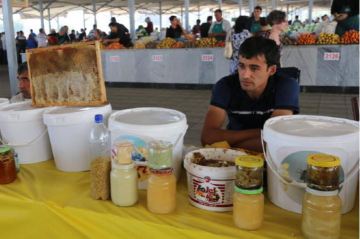 Friends just back from Uzbekistan shared this photo with me. The gentleman is selling honey and he doesn’t seem too happy about it. We’ll get to that in a moment.

First, what is Uzbekistan? It’s a place on the other side of the planet. From me. If you live in Uzbekistan, then I guess I’m the one on the other side. Uzbeks were taken over by the Russian Empire 200 years ago, then fell under Soviet rule for a couple of generations. One legacy is the Cyrillic script you see almost everywhere. Another legacy is incredible pollution and general despair in daily life. The country is ruled by a “strong man” who enforces allegiance and law and order in an otherwise unruly nation. Uzbekistan has the odd distinction of having more Stans as neighbours than any other place on Earth – its five abutting Stans are Kazakhstan, Kyrgyzstan, Afghanistan, Turkmenistan, and Tajikistan. Uzbekistan is generally perceived as dusty, repressed, depressed, and difficult. I suppose that’s not entirely unfair. The country has slavery, pollution and water problems.

Uzbekistan is cursed with a near-perfect cotton-growing climate and a rotten government. Cotton is the main business in that country, but the fiber has a brutal history. It is tough to grow and in Uzbekistan, cotton is mostly picked by hand. Cotton picking, of course, contributed to slavery in America and elsewhere. In Uzbekistan, Human Rights Watch says that as many as 2,000,000 men, women, and children will be used as slaves to harvest this month’s cotton crop. The government says it is everyone’s national duty to pick cotton. Well, not everyone – just the poor. The result of their national duty is the export of over a billion dollars worth of cotton. It props up the poor country’s economy and keeps the leader in power. But people die in the fields, according to Human Rights Watch, while performing their national duty – unpaid forced labour.

Then there is the water. Cotton thrives in Uzbekistan’s desert climate – if it is irrigated and heavily fertilized. Water is diverted from entering the Aral Sea and directed into the cotton fields. This has quickly turned the world’s 4th largest salt lake into a puddle. Once half the size of England, almost all of Aral has disappeared in the past 40 years. The environmental disaster began in the era of the Russian Empire, but the Soviet overlords brought industrial-scale cotton-growing and landscape degradation to an art.

Along with pillaging the water, there is ubiquitous pollution. Typical for huge monoculture plantations, cotton is targeted by weevils and other evils. The solution is harsh poison – not systemic insecticides, but aerial and boom-spray applications of cancer-causing insecticides. Further, the continuous cropping is sustained only by industrially-produced fertilizer which has polluted what is left of rivers and lakes in the country. The air, I am told, has a stench of poison everywhere. There is little escape for ordinary folks – conscription, dust, and pollution are the reality.

Which leads me back to the honey man in the first picture in today’s post. He doesn’t seem very enthusiastic does he? But who could be in his position? Undoubtedly his bees have also tasted the chemicals in the air. It is hard going for Uzbekistan’s beekeepers. The government – the same one responsible for the poisons and the slavery – is expanding beekeeping by seeking bee equipment. Maybe it is some sort of 5-year plan. I imagine their plans will compete against beekeepers such as the one shown above. Last year, the government estimated honey production at about 4 million pounds. They think they can expand it. Much honey is sold in recycled containers, including the Nutella jar you see here. Plastic wrap is often used for lids. There is no fault in that – beekeepers do what they must to survive. Including gloomily retailing honey at the big Tashkent market as the honey man pictured above is doing. He may be exhausted, he may be tired. Or he may be thinking about his trip nexy week into the countryside cotton fields in the back of a big transport truck. Slave labour – the national duty – for his country’s kings of cotton.

Ron Miksha is a bee ecologist working at the University of Calgary. He is also a geophysicist and does a bit of science writing and blogging. Ron has worked as a radio broadcaster, a beekeeper, and Earth scientist. (Ask him about seismic waves.) He's based in Calgary, Alberta, Canada. Ron has written two books, dozens of magazine and journal articles, and complements his first book, Bad Beekeeping, with the blog at badbeekeepingblog.com. Ron wrote his most recent book, The Mountain Mystery, for everyone who has looked at a mountain and wondered what miracles of nature set it upon the landscape. For more about Ron, including some cool pictures taken when he was a teenager, please check Ron's site: miksha.com.
View all posts by Ron Miksha →
This entry was posted in Ecology, Honey and tagged Aral Sea, cotton, pollution, Uzbekistan. Bookmark the permalink.