Bees Do the Darndest Things 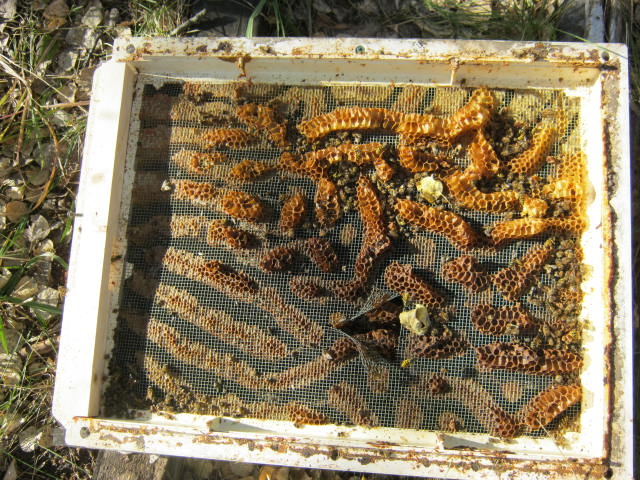 Bees stuck below the mite screen. Janne cut an escape for them to move up.

Janne, a bee-club friend, called one afternoon and described something weird that was going on in one of her hives. She told me that her queen and all the brood had somehow ended up in the tiny space below the mite-screen at the base of her hive. The bees were living between the screen and the base of her bottom board. That’s right, a space about two inches thick. Above that towered a two-story stack of bee boxes with some bees in them. As it was October and she was getting the bees ready for winter, she wondered what she should do. Find the queen among the burr comb? Cut out the brood and move it into frames? Put a strong hive over the little hive that lived in the bottom board?  What would you do?

I told her what I might do, but your answer is probably different because that’s the way beekeeping is. We all have ideas, based on our experiences and knowledge. Problem is, none of us has the same experience nor the same amount of information. That’s why beekeeping is an art, or craft, and not a science. Entomology is a science, of course, but not beekeeping.

I usually dread phone calls from new beekeepers. They tell me that they think their queen is dead or they wonder if they should feed their bees.  “How the heck would I know?” is the right answer, but I never say that. I ask for as much detail as possible, but this puts the new beekeeper in an awkward position as they struggle to find the vocabulary and make sense of what they have seen. With enough information from the newbee, I might come up with some answers. But to be honest, I often guess wrong even when it’s my own bees and even though I have access to everything I should need to know to figure out a way to help the bees.

But my friend Janne is not a new beekeeper. She is smart and articulate. She even took pictures and e-mailed them to me so I could be even more sure of what her bees were doing. I think she asked my opinion to get some ideas, but maybe she just wanted me to hear her really odd bee story. Bees do the darndest things and Janne knows that I love these tales of woe from the hive.

I told Janne to get a knife and cut the screen. This might entice the queen to move up into the lower brood box. She told me that it already had some bees in it. The queen generally moves upwards as she lays eggs, so I figured releasing her would get her laying in frames instead of the crowded comb the bees had made in the bottom space. I also thought she should reduce the hive to one brood chamber but leave her mutilated bottom board in place because the brood would hatch and the young bees would move up to care for the brood.  Winter is coming, so I told Janne to feed the hive heavily and wrap the single-story with a lot of insulation. Bees here usually need two deep brood chambers to winter well, but if she keeps an eye on the colony and then feeds it in early March, it might make it.

Well, two weeks earlier, Janne had actually cut a ‘T” shape incision into the screen of her screened bottom board. She had probably already mentioned that to me in our first phone chat but I had missed hearing it.  So, we were thinking alike about the remedy. The day after we spoke, she was back in her little apiary again. She sent me the pictures you see here and an e-mail describing what she saw.

Looking down into the bottom board. The queen had been stuck here for a few weeks,
building her entire brood nest in this narrow little space!

Before opening the troubled hive, Janne spent a few moments watching the hive entrance. This is always a good idea. When you work your bees, take the time to really look at their flight. Are the bees jumpy, as if robbing is going on? Are they listless, like sick bees might be? Is there a huge flight? Or no flight?  Janne saw lots of bees using the proper hive entrance and just a few bees using the false entrance – the gap that led to the little chamber between the screened bottom and the hive base.

Janne pulled off both brood chambers and set them aside. Since I had recommended that she reduce the two-story hive to a single because the population would be small, she pulled the cover off the top box to begin the consolidation process. That’s when she discovered brood in the top box. The queen had wandered up from the narrow bottom board space in the two weeks since Janne had cut the mite screen.

My beekeeper friend then had a dilemma. Should she consolidate everything into a single box, or leave the hive as a ‘proper’ two-story assemblage?  (I had recommended consolidation into one box because I figured there would be just a few bees in the hive and they would have trouble ‘heating’ a bigger home.)  Janne decided to reverse the hive (and consolidate all the brood into the lower chamber) and keep it as a two-story hive.  She has to make that decision herself.  She knows how many bees are there what shape things are in. She still has the option to trim it down to a single, using a bee escape to empty bees from the top box.

All of this was two weeks ago. Now it’s November, we are getting chilly weather, and bee work has to end for the season.  In a few months, I’ll let you know if this little hive makes it through the harsh Canadian prairie winter.

Ron Miksha is a bee ecologist working at the University of Calgary. He is also a geophysicist and does a bit of science writing and blogging. Ron has worked as a radio broadcaster, a beekeeper, and Earth scientist. (Ask him about seismic waves.) He's based in Calgary, Alberta, Canada.
View all posts by Ron Miksha →
This entry was posted in Beekeeping, Friends, Hives and Combs. Bookmark the permalink.

1 Response to Bees Do the Darndest Things