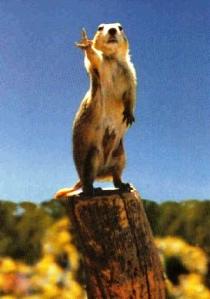 When I was a kid growing up in western Pennsylvania, Groundhog Day was a big deal. It didn’t hurt that it was also our elementary school principal’s birthday. We didn’t get the whole day off (unless Feb 2 was on a weekend) but we did participate in many rousing games of ‘catch your shadow,’ ‘catch your friend’s shadow,’ and, of course, ‘catch your shadow’s shadow’ – looking back, I think the teachers used this time for a coffee break. Or maybe they were in the principal’s office, cutting cake. Here in western Canada, the day passes with barely a salute. My young children said that they don’t even draw pictures of groundhogs. It was ‘business as usual’.  I wonder if their school is a bit too serious?

The groundhog tells us how our winter will end. With a bright sun and scary shadow, the overgrown rat runs back into its cave. Unless sadly, (and I need to get serious for a moment) the groundhog dies just before emerging, as Winnipeg’s Winnie the Groundhog did this year. Here’s a link, it takes you to The Weather Channel. The Weather Channel has a groundhog story? Not surprising – they have to get their long-range forecasts somewhere.  Anyway, here in Calgary, winter will linger. If it’s cloudy, there’s no shadow and winter will end in, well, a month and a half. These creatures and their shadows are about as skilled as our best TV weather folks. But what about bees? What do they know about the weather?

There are plenty of stories of beekeepers standing around their bee yards and suddenly noticing that all the bees are heading home while none are going out to forage. The beekeepers look up and a cyclone or hail storm or lightning ball or wall of water or something is rushing towards them. The bees probably have responded to rapidly falling barometric pressure by heading for shelter. They don’t like being caught in the rain any more than a beekeeper does. They are just more aware of quick weather changes. And they fly home faster than people do.

But can bees compete with Pennsylvania’s Punxsutawney Phil by making a long-range forecast?  Well, I have heard beekeepers claim that a tighter broodnest and extra bee glue (propolis) filling cracks between the boxes means a rough winter is ahead. I don’t know. A congested broodnest is likely because of a late-season nectar flow while excess propolis means the gummy parts of pines and poplars that secrete resin have been extra active – and the bees have been extra busy hauling the stuff home. Do they sense a tough winter? I’m not sure which clues our bees see that we don’t. But my mind is open on this one.

There is also the legend that honey bees will nest higher up in trees when they anticipate a winter with lots of snow. This one is extremely unlikely because wild bees swarm in the spring, many months before winter snows are expected. And here in western Canada, hives buried under a meter of snow actually survive better with the extra insulation than hives sitting out bare and exposed on the windy prairie.

By the way, the Calgary groundhog (or Richardson’s Ground Squirrel, in our case) faced a dark shadow all day. According to the myth, we will have only six more weeks of winter. That places spring near March 20th. No big surprise. That’s what the calendar says, too.

Ron Miksha is a bee ecologist working at the University of Calgary. He is also a geophysicist and does a bit of science writing and blogging. Ron has worked as a radio broadcaster, a beekeeper, and Earth scientist. (Ask him about seismic waves.) He's based in Calgary, Alberta, Canada. Ron has written two books, dozens of magazine and journal articles, and complements his first book, Bad Beekeeping, with the blog at badbeekeepingblog.com. Ron wrote his most recent book, The Mountain Mystery, for everyone who has looked at a mountain and wondered what miracles of nature set it upon the landscape. For more about Ron, including some cool pictures taken when he was a teenager, please check Ron's site: miksha.com.
View all posts by Ron Miksha →
This entry was posted in Culture, or lack thereof, Ecology, Humour, Strange, Odd Stuff, Swarms and tagged bee legends, Calgary, groundhog day, winter. Bookmark the permalink.