Almond pollination season is over. The billions of bees working in California have moved on. They are now mostly scattered across the American plains. It’s not easy to be a bee in the almond groves during February and March. Colony density reached hundreds of hives per square mile just before dispersal into the groves. During the staging period, disease can spread from hive to hive as the huge number of honey bees compete for limited resources and return to the mega-apiaries where they may drift from hive to hive and perhaps rob weaker colonies.  Out of the staging yards and distributed among the almond trees, bees may suffer from toxic sprays blown from rigs pulled by belching tractors.

Most colonies survive these unnatural assaults because beekeepers do what they can to keep their bees going. After the almond petals have salted the ground, hives are usually moved to recovery apiaries. These may be pristine locations at higher elevations in the Sierras, or up north in Oregon, or more commonly, over the Rockies on rangelands in Wyoming, Montana, and the Dakotas. In those places, spring flowers give respite and nourishment. This has been the pattern for millions of honey bee colonies during the past decade.  But all this migration activity may change one day.

Grove owners are becoming anxious about the cost of pollinating insects and the potential collapse of the bee industry. If honey bee populations should shrink and not recover, almond farmers would be in desperate straits. So, they have been looking at other ways of getting their harvest without dependence on honey bee pollination.

In the distant past – 25 years ago – beekeepers competed for almond pollination contracts. There were fewer groves. Almonds yield pollen that hungry bees enjoy in mid-winter, so beekeepers received just a gratuity to set hives among trees. It wasn’t much money because in those days growers depended on wind, wild bees, and neighbourhood honey bees for pollination. But it was soon apparent that although almonds produce some nuts without hired honey bees, the crop more than doubles when bugs saturate the ranches. In 1990, almonds yielded 1,000 pounds per acre. Today, production is over 2,000 pounds. The increased yield in largely due to increased numbers of honey bees pollinating the almond flowers.

Without bees, less pollen shifts from tree to tree. Fewer nuts develop. Growers could make profitable crops without honey bees if their trees are self-pollinating. Spanish varieties are self-pollinating, but California’s are not. California trees produce more nuts and the almonds are larger and tastier  than Spain’s. I mention Spain because, until 1993, Spain led the world in almond production. At the time, Spanish farmers had three times the acreage planted in almond trees along the Mediterranean coast. The groves weren’t irrigated, nuts were gathered by hand, farms were small, side-line family businesses. Their self-pollinated trees didn’t need much help from pollinating insects – a slight sea breeze was enough to transfer the pollen and set the seed because everything happened inside the same flower. However, despite much greater acreages in Spain, the California crop led the world in 1993 (and every year since) because of intense farming, irrigation, and the use of cross-pollinated varieties. 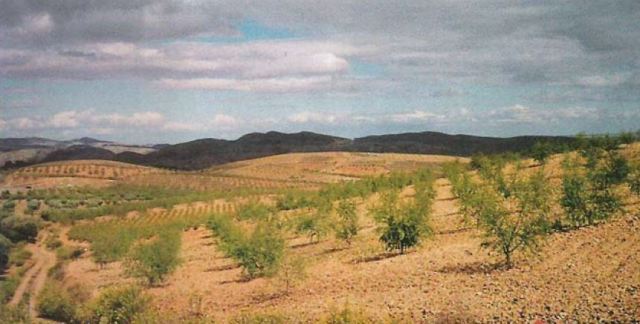 California’s almonds don’t do selfies. Bees are needed to transport pollen dust from neighbouring trees, cross-pollinating unrelated flowers. This results in non-incestuous fruits that are larger, hardier, and more glorious than their Spanish cousins. However, some California almond growers have been considering the less valuable self-pollinating species as Plan B for the day the bees quit buzzing.

Scientists in California have been breeding almonds with the goal of sumptuous self-pollinated nuts, superior to the Spanish varieties, but self-pollinated like Spanish nuts. So far, they have been moderately successful in their quest.

For years, Tom Gradziel has been attempting to design an almond that meets customer demands and growers needs without much help from paid pollinators. Self-pollination, Gradziel says, “can be incorporated by simply transferring the major gene conferring self-compatibility. However, the gene for self-compatibility is not naturally present in almond, which is naturally self-incompatible to enforce outcrossing and to reduce the risk of genetic inbreeding.” Gradziel has tried natural and forced genetic ticks to add the self-compatibility gene. Some of the best result have come from cross-breeding almonds and peaches.

Peaches self-pollinate. You will get plump juicy peaches even if the tree is alone in a pecan forest. Matching up willing peach and almond partners has led to an almond variety called Independence. I think that the name, Independence, reflects the goal of almond growers’ future relationships with beekeepers. Independence has been growing in popularity, but its yield is less than cross-pollinated (Dependent?) almond varieties.  The research continues.

I think that self-pollinated almonds which meet size and yield standards is not so much motivated by cost of pollination as it is by fear that there simply won’t be enough managed colonies of honey bees in the USA to fill future pollination requirements. Last year, the wholesale almond price was $3/pound. It takes about 75 pounds to hire a beehive. We have already seen that production rose from 1,000 to 2,000 pounds per acre over the past few decades – mostly because of honey bee pollination. Bees are worth a lot more than they are being paid. But if a virus/mite/disease/malady/disaster kills America’s bees, almond growers with self-pollinating almonds will have a valuable crop to sell.

Just as the selfie stick is emblematic of the collapse of our narcissistic western society, the self-pollinating almond – designed to perform its own special sort of selfie – may signify another collapse. Bee populations are tough to maintain, possibly making pollination untenable if sustained indefinitely at ever higher levels.  Perhaps almond growers will one day farm without bee help. What’s next? Trees without water? That’s a subject for another day.

Ron Miksha is a bee ecologist working at the University of Calgary. He is also a geophysicist and does a bit of science writing and blogging. Ron has worked as a radio broadcaster, a beekeeper, and Earth scientist. (Ask him about seismic waves.) He's based in Calgary, Alberta, Canada.
View all posts by Ron Miksha →
This entry was posted in Ecology, Genetics, Pollination and tagged almonds, honey bees, Pollination. Bookmark the permalink.