Our favourite Surfer Dude and his Retired Dad are the folks who invented the 21st-Century honey-on-tap bee hive. They have now won artistic recognition. You know their hive – it’s the revolutionary, earth-shaking innovation that has inspired thousands of lazy folks to take up beekeeping. You needn’t learn to extract, nor even open a hive. Just turn the tap and catch some honey on a pancake.  I speak, of course, of the contraption known as the Flow™ Hive.  Do you have yours? You may want one for your Museum of Things That Didn’t Work the Way You Thought They Would.

The snazzy hive promoters have won Australia’s Good Design Award of the Year. This puts them on the shelf with other winners who have invented a stylish toilet and an alarm clock with a big button. (Sensing a trend here.) Australia’s Good Design awards are supposed to go to people/companies creating clever designs. Sort of the Apple I-pad/I-phone/I-hive prizes for lesser folks than Steve Jobs.

The Flow™ Hive design is certainly clever. I don’t think anyone has ever thought of a way to get liquid honey out of a hive without opening the hive. Well, there was once a design for a Rube-Goldberg-esque hive that used an empty steel box as a super. A series of rotating knives dropped down and puréed the box’s wax and honey into a slurry, after all the bees left through an automatic bee escape. Then the whirling knives retracted and the box’s lid descended, crushing the mess of wax and honey and forcing it out through a pipe. I invented that when I was 12. My drawing covered a huge piece of thick brown paper that used to be a grocery bag. It had arrows and circles and knives and my design (which I called The Easy Hive™) even had a button for the beekeeper to push. After the mess of mixed honey and wax was tapped out, the lid rose back up again so bees could refill the the steel box. But that was long ago. We had neither the internet nor crowd-funding, so it went nowhere. I forgot about it and my drawing was lost during one of my many rushed changes of address. 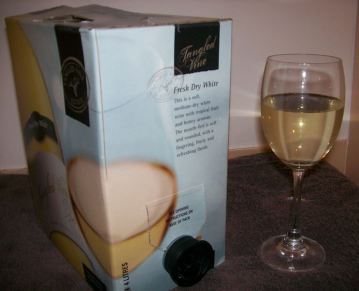 The new award-winning Flow™ Hive reminds me that in my younger days, I occasionally bought some extraordinarily cheap and tasteless wine, sold in an equally cheap and tasteless box with a hose on the bottom. It was a hit at my house parties. Had I drunk the box of “Wine on Tap” all by myself, I might have been intoxicated enough to buy the Australian “Honey on Tap” bee hive. I was young, I was idealistic. But I was also cynical (a trait that has served me well for decades). However I was too poor to buy a Flow™ Hive, even if it were available in the 1980s. The honey-on-tap hive is very, very expensive.

But it is novel, clever, and innovative. There are a dozen reasons why it won’t work as expected, but also a dozen reasons why it has enthusiastic fans among people who have never kept bees and have not yet actually tried the hive. I won’t go into the problems. (“It’s animal husbandry with a negative twist.“, “It’ll promote sloppy beekeeping.“, “Is it good for the bees? Who cares. We’ve got flowing honey.“, “We have found larvae and eggs in the harvested honey.” . . . and on and on. By the way, that last comment is a big turn-off, both for the hive-owner and for the bees whose little larvae are floating away towards the honey jar.) On the other hand, bright and shiny things attract many people, especially if the things are trendy and bright and  shiny. I can’t deny there are enthusiastic Flow™ Hive owners.

But if a Good Design Award is given, shouldn’t the award-givers wait to see if it’s really a good design before giving out the award? Maybe all of us old cynics will be proven wrong. (Someone recently pointed out to me that age is not a substitute for wisdom.) I’ve been wrong before. Maybe the flow hive will be happily and successfully used by millions (or even billions!) of backyard beekeepers. All of these new bee enthusiasts will save bees from extinction and everyone will have a fresh jar of honey every year. That would be great. And if it happens, I’ll write about it right here.

Meanwhile, congratulations to the Flow™ Hive people and their award from Good Design! I mean that sincerely. It is incredibly hard to come up with new ideas and create the schemes that market them. The technical design is clever. Should it win a ‘good design’ award? Probably not. Instead, I think Harvard Business School should give the designers a marketers’ and promoters’ award. They have done a brilliant job of catching a wave and hanging ten. Someday, MBA courses will lecture about the day the Flow™ Hive and crowd-funding met.

Ron Miksha is a bee ecologist working at the University of Calgary. He is also a geophysicist and does a bit of science writing and blogging. Ron has worked as a radio broadcaster, a beekeeper, and Earth scientist. (Ask him about seismic waves.) He's based in Calgary, Alberta, Canada. Ron has written two books, dozens of magazine and journal articles, and complements his first book, Bad Beekeeping, with the blog at badbeekeepingblog.com. Ron wrote his most recent book, The Mountain Mystery, for everyone who has looked at a mountain and wondered what miracles of nature set it upon the landscape. For more about Ron, including some cool pictures taken when he was a teenager, please check Ron's site: miksha.com.
View all posts by Ron Miksha →
This entry was posted in Beekeeping, Culture, or lack thereof, Hives and Combs, Humour, Save the Bees, Tools and Gadgets and tagged bee hives, crowd-funding, Flow Hive. Bookmark the permalink.