Bees sense the environment differently than humans. For example,  bees can see ultra-violet colour and distinguish it from violet and white, yet they see red as if it were black. They sense the orientation of polarized light. Their massive compound eyes give them an image made of hexagonal images, similar (but not quite) to the picture I made below, to the right. The honey bee’s eyes are good at sensing thin structures (like flowers on stems) and motion but, for a bee, a person pressed flat against a wall has disappeared from sight.

Bees see mosaic hexagons, similar (but not quite the same) to what’s shown here.

Bees taste with the tips of their antennae, sampling sweet, bitter, sour, and salt. They can taste salts better than humans can, but are less sensitive to the bitter flavour of coffee. Their antennae also give them a sense of touch which monitors bee dances and cell wall thicknesses.

The honey bees’ sense of smell is 100 times more sensitive than ours – in London, experimenters have trained bees to smell/detect cancer. When not engaged in cancer research, that keen sense of scent can draw workers to perfumed sugars (as Karl von Frisch proved a hundred years ago) and can help queens find drones. Bees sense sound, too, but not through the ears they don’t have. Instead, honey bees pick up vibrations made by low frequency noises. They probably can’t hear your soft murmurs or sharp curses when you are near their hive.

In their own ways, bees use the same senses that humans use – sight, sound, smell, taste, touch. But bees have at least one extra sense. Some years ago, scientists found that bees also sense the magnetic field that surrounds them. When he was awarded the Nobel Prize in 1973 for his bee research, Karl von Frisch mentioned magnetism. In his Nobel Lecture, he said:

“The idea that the magnetic field might play a role in the puzzling orientation performance of animals was rejected for a long time. During the past years it has been confirmed by new observations, especially in birds and insects. Nothing so far points to the possibility that bees, in their purposeful flights cross-country, are making use of the earth’s magnetic field. Unexpectedly, however, it proved equally significant biologically but in a different way. When a swarm of bees builds its combs in a hive furnished to them by the beekeeper, their position in space is prescribed by the small suspended wooden frames. In the natural habitat of the bee, perhaps in the hollow of a tree, there are no wooden frames present. Nevertheless, thousands of bees labor together and in the course of one night achieve an orderly structure of parallel combs; the individual animal works here and there without getting instructions from a superintendent. They orient themselves by the earth’s magnetic field and uniformly have in mind the comb position which they knew from the parent colony.”

Von Frisch spoke these words in Stockholm in 1973, stating, “Nothing so far points to the possibility that bees, in their purposeful flights cross-country, are making use of the Earth’s magnetic field.” That statement (true at the time) has since been modified. Among other research, four scientists showed the importance of magnetism during bee foraging in a paper in December 2014 (Does the Earth’s Magnetic Field Serve as a Reference for Alignment of the Honeybee Waggle Dance?*  by Veronika Lambinet, Michael E. Hayden, Marco Bieri, and Gerhard Gries). 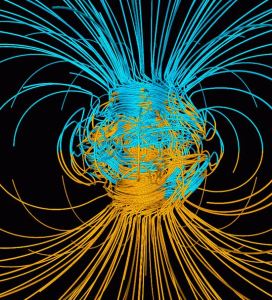 Honey bees apparently make use of the ambient magnetic field that surrounds us and influences our direction-finding compasses. This magnetic field is generated within the Earth. It changes with time and varies in direction at different latitudes, but for the purposes that bees need, it is stable enough.

Scientists aren’t sure where the bees’ magnetic sensor is located. Bees have iron-based crystals in cells in their abdomen which could work as magneto-receptors. In 2012, an idea emerged that suggests bees may literally “see” lines of magnetism superimposed on their visual image. This does not necessarily mean that the information is collected at the bees’ eyes, but it could mean that magnetic and visual data merge in the brain, giving bee navigators a view similar to fighter pilots whose helmets include projections of pathways and flight data. Obviously, there’s still a lot to be unraveled here.

How do we know that bees use magnetic field information? Since we don’t really know where the input sensor is nor how it communicates with a honey bee brain, we can’t directly surgically alter or manipulate the sense organ. Instead, to see how honey bees and magnetism interact, scientists use two different skills.

1: Observing the natural environment.  For many years, people have noticed that animals tend to perform some habits in alignment with the magnetic field. Sort of animal kingdom feng shui. For example, dogs face north (or south) when peeing on a tree while cows prefer to align with the Earth’s magnetic field while grazing. Swarms of bees build their comb inside trees or hollow boxes so that they are parallel to the combs in their mother hive. This obviously saves a lot of argument among the bees when they start building their new house because they immediately agree on the orientation for the new comb. With nothing to guide them, the bees could as easily build east-west as north-south – or any angle between. However, up to nine days after swarming, the bees will remember their old home’s pattern and will copy it.

2: Manipulating the environment.  You may have questioned the science in the last bit above:  How do we know that bees use the magnetic field to agree on how to build new comb?  Maybe the honey bees are using the sun’s position in the evening, or some other stimulus.

We are fairly certain the magnetic field influences comb building because researchers have placed swarms in dark rooms, then aligned an artificial magnetic field at various angles and found that the bees respond by building their comb correspondingly.

Researchers have also confused the poor little animals by placing strong magnets in their hives – twisted and messy combs result instead of uniform straight ones.

Similarly, by experimenting with the magnetic field, it appears that bees supplement their navigation with magnetic information. Zoologists disturb the bees’ magnetic environment and wait to see if anything interesting happens when scout bees host bee dance parties. It does. In one unusual experiment, tiny magnets were strapped to bees’ bellies. These made it hard for bees to follow flight path data they’d received back at the dance hall. Under normal conditions, honey bees can sense variations in magnetism 1/2000 as strong as the Earth’s ambient magnetic field (26 nT vs 46,000 nT). This is extremely significant, indicating that very minor local magnetic differences may help bees find their way.

Such fine discernment of just a few nano-Teslas (nT) implies (according to Taiwanese researchers Hsu, Ko, Li, Fann, and Lue) that bees may memorize their homestead magnetic field intensity and orientation, allowing them to navigate home from almost anywhere.** This helps explain what happens when bees are used to beeline a wild swarm. In bee-lining, bees are captured in a small box, carried around for hundreds of metres/yards, and then freed, one at a time. After circling overhead a few times, the bees make a beeline towards home. The human with the little box of bees chases for a while, then lets another bee loose, watching her go and following a little farther towards the bee tree.

There is at least one other place that magnetism may play a role in bee behaviour – drone congregation sites. Before queens and drones mate, the queen is attracted by pheromones to meet up in aerial clusters where drones hang out in great numbers. We know that the queen’s nose leads her to the boys. But the same congregation sites are used year after year by the drones who gather by the thousands but never live more than one season. Repeated use of the same congregation spot – by drones who had never been there before – is baffling. Now it appears that the spot where drones meet to wait on queens may involve local magnetic anomalies that encourage drones to congregate.

Much remains to be discovered. There is not much agreement yet among the animal scientists. However, the fact that bees use magnetism to orient their combs in a new home seems proven. The idea that bees use the magnetic field to help them navigate seems likely. Beyond that, we speculate that magnetism is involved in communication and congregation.

Earlier in this blog post, I mentioned that humans and bees share the same five basic senses. Perhaps the sixth sense, too. This week, an article in the prestigious Science journal made a case for human magneto-receptivity.  Careful experiments show that people also sense the magnetic field. The experiments involved willing subjects strapped into magnetism-free Faraday cages with brain basket hoodies and electrodes that could sense variations in neural alpha-waves. Abrupt changes induced by zoologists in the ambient magnetic field caused brain wave changes. What this means for our ability to navigate, communicate, and contemplate is not yet known.

Ron Miksha is a bee ecologist working at the University of Calgary. He is also a geophysicist and does a bit of science writing and blogging. Ron has worked as a radio broadcaster, a beekeeper, and Earth scientist. (Ask him about seismic waves.) He's based in Calgary, Alberta, Canada. Ron has written two books, dozens of magazine and journal articles, and complements his first book, Bad Beekeeping, with the blog at badbeekeepingblog.com. Ron wrote his most recent book, The Mountain Mystery, for everyone who has looked at a mountain and wondered what miracles of nature set it upon the landscape. For more about Ron, including some cool pictures taken when he was a teenager, please check Ron's site: miksha.com.
View all posts by Ron Miksha →
This entry was posted in Bee Biology, Science and tagged bee communication, bees, bees' senses, drones, Karl von Frisch, magnetism, navigation. Bookmark the permalink.

6 Responses to The Bees’ Sixth Sense