Scientists may have proven that African Honeyguide birds “communicate” with their human partners. You have probably already heard about this, as it’s been reported this week in Zaire’s Times, the New York Times, The New Yorker, and fine papers everywhere. The original report, Reciprocal signaling in honeyguide-human mutualism, by Claire N. Spottiswoode  is here. A very lucid explanation (I recommend that you read it.) was written by evolutionary biologist Jerry Coyne – his piece is Honeyguides and humans: a wonderful mutualism between our species and a wild bird. You will find it here.

All these stories have been produced by much better writers than me. My intention here is to simply give a quick summary of this bit of science, in case you’ve somehow missed it.  Then I will spend a moment on something that’s related.

The honeyguide story (in case you don’t plan to read the links I just gave you) informs us that humans make a distinct call to honeyguides whenever the human is in the mood to go bee-tree climbing. Birds respond to the humans’ Br-r-r-r-UHM by teaming up with the honey hunter. The guide bird finds wild swarms, the human hunter dislodges them and shares the wax and bee brood with the bird. Scientist Claire N. Spottiswoode is fairly certain that there is no training or coercion involved. Honey guide and honey hunter simply cooperate. Cooperative birds reproduced more abundantly, resulting in successful lineages of mutually cooperative birds.

I’m just a geophysicist and not a biologist, so don’t trust me on what follows. But a few years ago it occurred to me that we sometimes inadvertently manipulate species’ evolution in our environment. I’m not talking about planned breeding programs, but indirect consequences which have affected our world – such as the difference in temperament between Africanized and European honey bees.

The thing that occurred to me is that we may have influenced the genetics of honey bees. Central European bees (Apis mellifera carnica) are usually quite gentle. They can be handled easily. They rarely sting. For over a thousand years, these bees were kept on porches, along walkways, and in gardens in Slovenia, Austria, Hungary, and Croatia. Any hives that were irritable were given the sulphur treatment. The human goal was not to breed gentle bees for the future, but to reduce stings in the present. Nasty colonies were killed. Gentleness was thus encouraged. 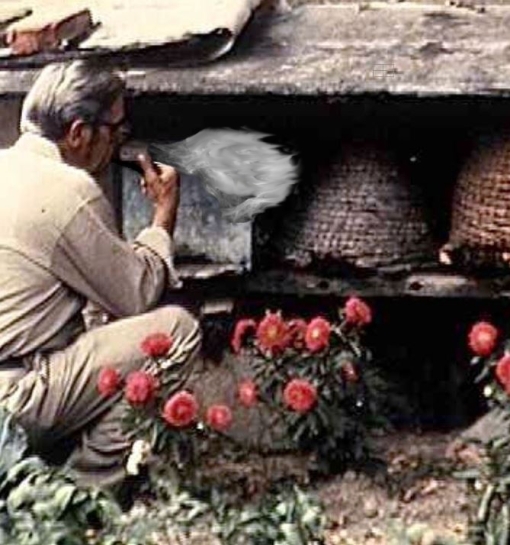 Meanwhile, in equatorial Africa, native honey bees (Apis mellifera adansonii) tended to prefer life in trees. Moving them into hives near homes was less successful. If a person wanted honey, they had to climb trees (maybe after the bees’ nest was discovered by a honeyguide bird). In the tree, the meanest and most aggressive bees repelled the honey hunters while meeker colonies were eaten. Beekeepers in Africa learned to make hives and keep them in trees (partly to avoid predators). Without daily intimate contact, the emotional disposition of the bees wasn’t a great factor in determining which nests would be exterminated. In fact, aggressive bees chased beekeepers away. In this human-bee relationship, irritability was promoted.

Beehives in a tree, south of Munarago, British East Africa, 1906.

Undoubtedly there is more to this story.  Readers may offer corrections. I haven’t seen these relationships invoked elsewhere to describe honey bee temperament, so it might be wrong. Other environmental pressures (resulting in genetic changes) also contribute to adansonii behaviour (after all, it is a different subspecies).  However, it is interesting that in Brazil, where the Africanized honey bee was released in 1957, the invasive bees were at first extremely aggressive, but after 60 generations of interaction with Brazilian beekeepers, they seem to have lost some of their sting.

Ron Miksha is a bee ecologist working at the University of Calgary. He is also a geophysicist and does a bit of science writing and blogging. Ron has worked as a radio broadcaster, a beekeeper, and Earth scientist. (Ask him about seismic waves.) He's based in Calgary, Alberta, Canada.
View all posts by Ron Miksha →
This entry was posted in Ecology, Genetics, Hives and Combs and tagged Africanized honey bees, Brazil, Carniolan honey bees, Central Europe, evolution, honeyguide. Bookmark the permalink.