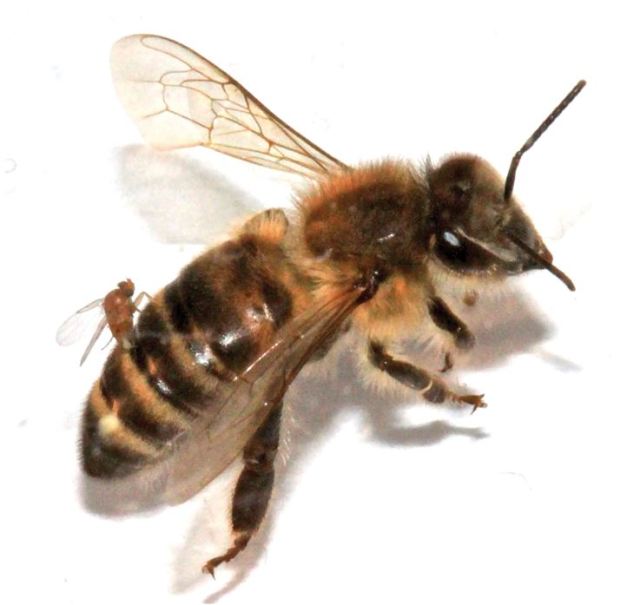 I wish I had good news. Canada’s first confirmed case of zombees has appeared – on Vancouver Island, out in the Pacific. Hundreds of kilometres from my home in Calgary.  Zombie zombees, like the human kind, are undeads who are unalive and have little control over their bodies. Zombees would like to cluster and enjoy family time in the evening, but their inner demon forces them to fly out of the hive and head towards street lamps as soon as it grows dark.

(Trigger warning: Yuck stuff ahead.)  Zombees are ordinary honey bees whose bodies have been invaded by the larvae of a small parasitic fly. The Apocephalus borealis deposits eggs into a bee’s abdomen. These hatch into worms that live inside the bee. Honey bees with parasitic worms end up out of control. They are doomed to die miserable deaths and seem compelled to visit porch lights at night. Eventually maggots erupt from the honey bee, escaping near the spot that the bee’s thorax and head join. Not a good time for the bee.

I first wrote about Zombees over four years ago, when they were discovered in honey bees in California. Since then, a few have appeared in Vermont, the Dakotas,  and now Nanaimo, British Columbia.  Researchers believe that the parasitic fly normally uses other bee types as hosts and their move to honey bees may be new. This is possible.  To me it may indicate that native bees are stressed and have reduced populations, making them harder for Apocephalus borealis to find and infest. As a result, the much more common honey bee has become their occasional target. It’s also quite possible, I think, that we’ve only now begun to pay attention to bees around lights at night. That would explain why there are few cases and why they are scattered around the continent. We tend to only find things if we look for them. (If you think you’ve made your own zombee sighting, you can report it on the ZomBee Watch website.)

Hopefully, zombees will not be a serious problem. Beekeepers don’t need another pest. It’s likely that this parasitic fly, which is native to North America, has been mixing it up with various bee species for a long while. The rarity of Zombie bees is likely to remain. Perhaps they will be such an uncommon novelty that we will want to buy Apocephalus borealis kits to infest a few bees at children’s birthday parties or at the local bee club’s pub night. For amusement.

Ron Miksha is a bee ecologist working at the University of Calgary. He is also a geophysicist and does a bit of science writing and blogging. Ron has worked as a radio broadcaster, a beekeeper, and Earth scientist. (Ask him about seismic waves.) He's based in Calgary, Alberta, Canada.
View all posts by Ron Miksha →
This entry was posted in Bee Biology, Diseases and Pests, Ecology, Strange, Odd Stuff and tagged Apocephalus borealis, bee parasites, Vancouver Island, ZomBees. Bookmark the permalink.

2 Responses to Zombees in Canada