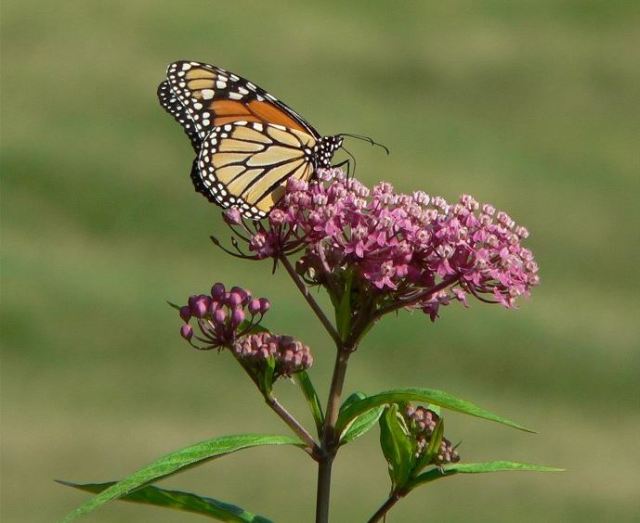 The Cedar Rapids (Iowa) Gazette had a story yesterday about a fellow in Monticello who ran afoul of the law for something he’s growing in his back yard. His crime? Cultivating (Milk)weed.

Bee and butterfly enthusiasts know milkweed. So do curious kids who squeeze the stem and watch white sap drip out. I used to love pulling apart milkweed pods in the fall. I’d liberate the seeds, back in the day when such activity was legal.

Milkweed is the main plant that stands between the fluttering wings of a Monarch Butterfly and extinction. But milkweed is a noxious, obnoxious invasive plant within the city limits of Monticello, Iowa. Mostly because it’s unsightly. Considered invasive in places where manicured lawns and Wal-Mart discount flowers flourish, milkweed is actually native to Iowa. It has fed migrating monarchs for centuries. But Monticello has its rules – no milkweed, no matter how hungry the butterflies get.

At a city council meeting, defendant Michael Felton explained how his property is a designated waystation and restaurant for monarchs heading to Mexico. His milkweed patch is registered and supported by Monarch Watch (and possibly by Prince Charles & Sons’ lesser-known charity, Monarchs for Monarchs).

According to the Gazette, Felton was reminded that inside Monticellian limits, all weeds over 8 inches tall must go.  Felton explained that the plants are lovely and he considers them flowers, with all the rights and privileges generally granted to flowers. Council, which apparently sets standards for lawn care as well as definitions for beauty, wasn’t budging on that.

Felton then asked how he should get rid of his cone flowers and milkweed.  The answer came quickly from an attending councilman: “Roundup.” Most of my readers know that Roundup is a dandy herbicide that can clean up the nastiest herbal lifeforms, even milkweed, unless the plants contain a patented anti-Roundup GMO gene. That’s an option that could make Mr Felton’s milkweeds Roundup-resistant and I’ll bet money that he hasn’t thought of it. 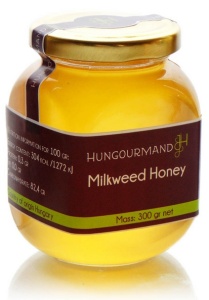 If you are a beekeeper or beefriend or monarch lover, milkweed has already captured your heart. The lanky, homely weed has nondescript leaves that only a monarch caterpillar would munch and dull flowers that only a hungry bee would seek. But when the weather is right and the stars are aligned, milkweed nectar is collected in great gobs.

Honey from milkweed fills supers and honey jars. Frank Pellett’s American Honey Plants reports that bees sometimes stored over 100 pounds of milkweed honey and, Pellett wrote, in northern Michigan, beekeepers used to expect 50 pounds of light-coloured, mild-flavoured honey every year. Berkshire Farms in western Massachusetts tells us that milkweed is a good honey plant there and it grows in meadows near their old mill house along a river.

So easy to get tangled up here. Also, note the ‘milky’ latex at the branch joint.

There are 55 milkweed species. Some, like the swamp milkweed at the top of this post, have flat flowers, but most are globular, like the one to your left.  Honey bees are fond of fragrant milkweed flowers, but sometimes find big trouble while milking the milkweeds. Bees can get trapped by the pollen-containing pollinia. Rather than face certain death in the flower trap, some bees manage to rip off their stuck legs or antennae and then hobble home with a tank of honey. (Others just sit there and die.) If homeward hobblers manage to make it back they’re greeted as disabled veterans by their hive mates – they are dragged out of the nest and exiled until dead. (So much for embracing the bees’ utopian society.)

If you have a hankering to be a rebel with a cause and make urban mischief, here’s a link on How to Grow Milkweed. But beware that you may be breaking some stupid archaic nanny-state law and also be aware that I’m not Donald Trump – I can’t afford to pay your bills if you get sued and need a lawyer. You’re on your own. But here’s that link again, just in case you missed it the first time: How to Grow Milkweed.

Ron Miksha is a bee ecologist working at the University of Calgary. He is also a geophysicist and does a bit of science writing and blogging. Ron has worked as a radio broadcaster, a beekeeper, and Earth scientist. (Ask him about seismic waves.) He's based in Calgary, Alberta, Canada. Ron has written two books, dozens of magazine and journal articles, and complements his first book, Bad Beekeeping, with the blog at badbeekeepingblog.com. Ron wrote his most recent book, The Mountain Mystery, for everyone who has looked at a mountain and wondered what miracles of nature set it upon the landscape. For more about Ron, including some cool pictures taken when he was a teenager, please check Ron's site: miksha.com.
View all posts by Ron Miksha →
This entry was posted in Culture, or lack thereof, Ecology, Honey Plants, Humour, Save the Bees and tagged Iowa, milkweed, monarch butterfly. Bookmark the permalink.