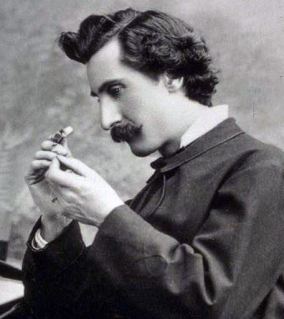 September 18 is the birthdate of British-American    entomologist     Charles Valentine Riley. Riley pioneered the scientific study of insect pests and their impact on agriculture.   He founded the US Department of Agriculture’s Division of Entomology and was one of the first to use biological pest control. Oh, he saved the French wine industry, too.  He had an unlikely start.

C.V. Riley (as he was usually known) was born in Chelsea, the yuppie section of 19th-century London. His father was a minister, a rising star in the Church of England. At age 11, C.V. was sent to the continent (France, then Germany) to study languages, art, and science. But within a couple of years, his father died and C.V. was brought back to London. His widowed Mum remarried and C.V. was disinherited.

By 17, C.V. Riley was on his way to America to work as a farm labourer on property owned by a British investor who had taken an interest in the young man’s plight. After a few years of grueling farm work, Riley found a job as a reporter and artist for a farm journal, Prairie Farmer. It was 1864 – Riley was 20, drafted into the American Civil War, and released after his compulsory 100 days of service. Riley then went back to the magazine, continuing as an artist and reporter, but taking on the added job of editor of the journal’s bug division. The boy from Chelsea was the Prairie Farmer’s entomology editor.

His talent as an observer and artist were noticed. In 1868, at age 24, Riley was appointed Missouri’s first state entomologist.  It was a time of huge emphasis on all thing farm-related. America’s first universities were “state agriculture schools” where research on best farm practices were conducted. The west was growing explosively, populated by European homesteaders. The government bolstered settlement and farming. To assure success, new crop varieties were developed, including drought-resistant wheat and fast-growing cotton. As farmers specialized, miles after mile of grain was seeded in 1870s-style monoculture, resulting in insect plagues. The concentration of food led to infestations of bugs, beetles, and especially grasshoppers. Economic entomology – mostly geared towards killing pests – was born.

One of C.V. Riley’s first distinguishing studies involved the 1873-1877 Kansas locust plague. He convinced Congress to form the US Entomology Commission. Riley was appointed chair of its Grasshopper Commission. In 1878, he was appointed the USDA’s first entomologist. But he got into a big spat with the ag department’s chief, a political appointee and Civil War general, so Riley quit. But two years later, the general was gone and Riley was back. But he never mastered diplomacy.

He was volatile  – I read a letter which he wrote to a famous naturalist, Mary Lua Treat, where he mocks her efforts at mailing galls (caused by parasitic insects) to him, then wishes she has many more galls in her future. He was probably teasing, but the letter sounds really rude. Riley was also severely overworked and given to bouts of “nervous exhaustion”. He held a USDA post until 1894. Simultaneously, he was the Smithsonian’s first curator of insects.

Throughout all the politics, C.V. Riley edited entomology journals which he founded and published – the American Entomologist (1868–80) and Insect Life (1889–94). These journals were brightened by Riley’s sketches and drawings of all manner of insect. He was a gifted observer, an talented artist, and an influential author. Charles Darwin’s work (butterfly colouration; insect kinship; cross-fertilization of plants; insect/plant dependence; insectivorous plants) was mentioned in nearly every issue. In 1880, Riley showed how flowering plants, hymenoptera, and diptera co-evolved during the Cretaceous.

On the science front, he is credited with the first use of biological control (instead of chemicals) when he imported a beetle from Australia to eat scale that was destroying California’s citrus industry. Soon after, he was one of the first to notice that American grapes, Vitis labrusca were resistant to a yellow sap- sucking insect called Phylloxera which was devouring European vineyards. With J. E. Planchon, Riley grafted French grape stems on American V. labrusca root stock and shipped them to France. Together, they saved the French wine industry. For this, Riley was awarded the French Grand Gold Medal and was named a Chevalier of the Legion of Honor.

Not so enthused about bees

With all this brilliant bug stuff – saving the French grapes from Phylloxera,  starting entomology journals, founding biological pest control, rising rapidly in the ag department – I wondered what C.V. Riley had to say about honey bees. 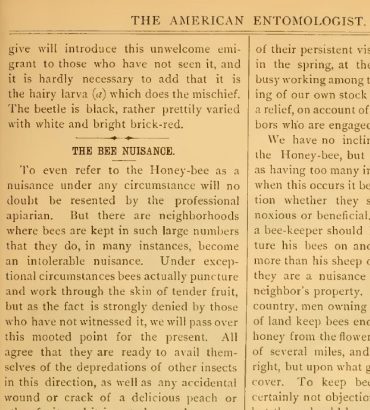 Not much. And the wee bit of ink that he spilt towards bees was mostly negative. His magazine, The American Entomologist, carried a piece called The Bee Nuisance, which describes all sorts of bee complaints. At the Illinois State Horticultural convention in 1874, his talk was titled “Apis mellifica as an enemy to horticulture.”

His main contentions were that honey bees injure ripening fruit and they are a nuisance to farm workers. Riley’s journals carried numerous stories about honey bees attacking grapes, peaches, and raspberries, making farmers flee in fear while the bees bruised and battered crops before harvest. Riley also urged people to chase beekeepers out of their neighbourhoods if they ran too many hives.  Meanwhile, from what I could see as I leafed through several hundred pages of Riley’s journals, he wrote very little about the honey bees’ importance as a fruit pollinator. Because of Riley’s prestige, all of this created problems for beekeepers in the late 1800s and into the early 1900s. Much of Riley’s criticism was unwarranted – I’ve not heard complaints from growers about excessive fruit damage and today they recognize the importance of honey bees as pollinators.

Regardless his apparent honey bee animosity, C.V. Riley was one of the world’s first true practical entomologists and his contributions (especially making Rhône Syrah and Bordeaux Cabernet Sauvignon possible) deserve our recognition. We can only speculate what he may have accomplished if his life had not ended tragically at age 52. In 1895, he and his fourteen-year-old son  were racing their bicycles down Columbia Street towards Riley’s Smithsonian office when he hit a granite building stone that had fallen from a wagon. C.V. Riley smashed into the pavement and was carried home where he died that evening,  never regaining consciousness.

Ron Miksha is a bee ecologist working at the University of Calgary. He is also a geophysicist and does a bit of science writing and blogging. Ron has worked as a radio broadcaster, a beekeeper, and Earth scientist. (Ask him about seismic waves.) He's based in Calgary, Alberta, Canada. Ron has written two books, dozens of magazine and journal articles, and complements his first book, Bad Beekeeping, with the blog at badbeekeepingblog.com. Ron wrote his most recent book, The Mountain Mystery, for everyone who has looked at a mountain and wondered what miracles of nature set it upon the landscape. For more about Ron, including some cool pictures taken when he was a teenager, please check Ron's site: miksha.com.
View all posts by Ron Miksha →
This entry was posted in Diseases and Pests, Ecology, History, People and tagged Charles Darwin, Charles Riley, economical entomology, insect pests, Smithsonian. Bookmark the permalink.