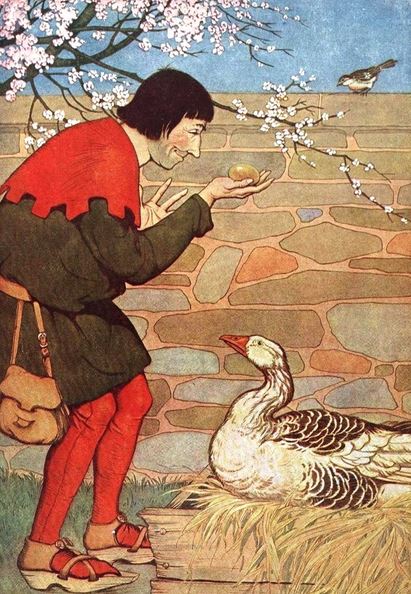 Years ago, an American senator began handing out prizes that he called the Golden Fleece Award. Started in the 70s by Wisconsin Democrat senator Bill Proxmire, the Golden Fleece was an anti-science thing, intended to highlight how wasteful it is to give research grants to those splurging scientists who blow big wads of cash studying esoterics like the sex lives of the screwworm.

Why is the sex life of a screwworm funny? 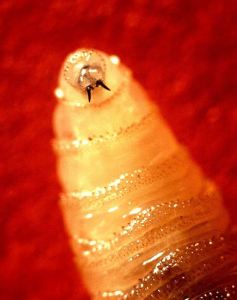 The screwworm develops from eggs laid by a fly. It was once common in the southern USA. A fly could lay about 400 eggs in any cuts, wounds, or skin sores on a cow. The cattle often died from the parasitic worms that followed. Before 1980, cattle ranchers estimated that they lost 2 billion dollars a year because of the nasty worms. No chemical or pharmaceutical company was interested in finding a cure because most of the farmers could hardly afford hay, let alone medicines for their cows.

The USDA set some entomologists to work on the problem. They created sterile screwworms. By 1982, the fly and all its worms were eradicated from the USA. Since then, farmers (and consumers of beef and milk) have saved billions of dollars, just because someone did the research to rid America of the parasite. [This year, 2016, screwworm was found again in Monroe County, Florida. I think that’s the first spotting in the USA in 34 years. It probably arrived from imported horses. You can be sure that it will be eradicated again.]

In the 1970s, when the screwworm project was underway, it was easy to mock the scientists involved – after all, they were studying the sex lives of screw worms. Such research was often the target of funding cuts. To balance the mean-spirited effects of the Golden Fleece award, and to help point out the unexpected rewards of scientific research, the Golden Goose Award was created. The Golden Goose highlights research which might have easily been defunded but instead produced broad unforeseen benefits.

This year, the Golden Goose Award recognized a group of scientists who created The Honey Bee Algorithm. Here’s a short video that explains the algorithm and its significance.

Did you notice the scientist say that when a honey bee follows a waggle-dance, she usually doesn’t make it to a new flower patch on her first try, it takes her a little time for her to get efficient? Sounds interesting, but unimportant, doesn’t it? When you do research, you don’t know where it’s going to go. In the next video, you’ll see Senator Chris Coons, who tells us that honey bee research in the way bees forage led to an algorithm that IT companies use in their design of efficient servers  for the management of internet traffic. Too, me that’s amazing. You can be sure that the bee scientists who began unraveling the way bees learn to forage were not thinking about internet servers. Not at first, anyway.

The story begins with Cornell honey bee researcher Tom Seeley. He became interested in understanding how thousands of honey bees efficiently forage – visiting millions of flowers within a 5-kilometre radius – without ‘benefit’ of a central organizing authority. This is similar to internet servers – they never know how much traffic there will be (similar to changing weather interrupting nectar flows) nor how much data will be carried at any moment (similar to the way flower density and nectar flows change).  Data distribution systems and nectar gathering systems both have only vague notions of future events. Colonies, like servers, have to be ready for the biggest flows imaginable but also for dearths. All of this without a boss.

To understand how this worked, Seeley and his grad students anesthetized  the population of a small nuc hive and glued ID labels to the thoraxes of 4,000 bees. Then they observed the bees foraging at pots of sugar syrup the researchers had distributed at various locations around the hive. 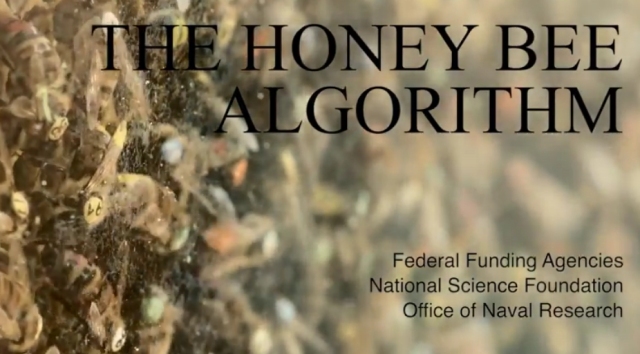 Part of what Tom Seeley realized is that foraging honey bees make individual decisions that benefit the entire hive. This does not imply that bees have free will or high-level intellectual reasoning. But if a bee returns with nectar and readily finds a housekeeping bee eager to take and store it, then that ‘indicates’ the hive urgently needs what was found. In that case, the forager begins a waggle dance to draw attention to what she’s found. On the other hand, if the returning bee finds it hard to unload her fresh nectar, it probably ‘indicates’ that other bees have found plenty of nectar already. So a recruiting waggle dance isn’t necessary – in fact the returning bee may even change her own strategy and follow another dancer’s lead to a better forage spot. In human terms, a teenager catches up with friends at the mall and wants to tell them about a great dance spot he’s found but they’re all excited about another place – they are really, really excited, so he tags along with them and doesn’t even mention the lame place he’d just discovered.

As Seeley was unraveling the hive foraging/communication system (“The Honey Bee Algorithm”) John Vande Vate was trying to optimize leaderless distribution. Serendipitously, he caught a National Public Radio interview of Seeley describing his findings. Vate realized there might be a useful application in his own work. So he traveled to Cornell to meet Seeley and to learn about the algorithm. It took years of collaboration with engineering colleagues at Georgia Tech (Craig Tovey and John J. Bartholdi III)  before Vate, Tovey, Bartholdi, and Seeley distilled the essence of the the bees’ activities and found a way to apply it to distribution and allocation puzzles. According to their mathematical model, bees transition through a sub-optimal ‘learning’ phase which opens avenues for discovery. Without discovery, new (potentially better) sources can’t be found.

It was a few years before the Honey Bee Algorithm was applied to the internet server distribution problem. Although the engineers and the bee biologist saw that the bee algorithm was a novel approach to solving some mathematical problems, it wasn’t until Sunil Nakrani asked Craig Tovey for advice on solving the internet distribution issue that everything came together. Companies that host websites have to be prepared for irregular demand and changing conditions. They would benefit from systems that ‘learn’ optimal, but dynamic, paths to relay data to customers. Nakrani developed the bee algorithm into his Ph.D. dissertation and it was quickly shortlisted as one of the best computational dissertations in the United Kingdom that year. The bee-based paper Nakrani and Tovey wrote describing their research has been cited hundreds of times. It’s been used as a basis for traffic flow, fuel economy, and work-efficiency studies. As goldengoose.org puts it:

“Today, web hosting services are implementing biologically inspired algorithms like Tovey and Nakrani’s to drive larger revenues and more efficiently operate server farms in the rapidly growing $50 billion global market for web hosting services. And the field Tovey, Bartholdi, and Vande Vate stumbled into – self-organizing systems and biomimicry – is a burgeoning area of research that includes everything from biologically-derived adhesives and fluorescent proteins to systems engineering solutions inspired by bees, ants and other social insects.”

So, this is what the Golden Goose laid: a beautiful Honey Bee Algorithm. Because funding came from federal government sources, the work immediately entered the public domain where it was shared by commercial developers and academic problem-solvers. Nakrani was largely funded by the UK government, the others were supported by grants from the National Science Foundation and the Office of Naval Research.  As Bill Gates says about the Golden Goose, “Government R&D budgets are very small, and yet they are absolutely critical to drive innovation forward.” Sometimes innovation advances one little bee-waggle at a time.

Ron Miksha is a bee ecologist working at the University of Calgary. He is also a geophysicist and does a bit of science writing and blogging. Ron has worked as a radio broadcaster, a beekeeper, and Earth scientist. (Ask him about seismic waves.) He's based in Calgary, Alberta, Canada. Ron has written two books, dozens of magazine and journal articles, and complements his first book, Bad Beekeeping, with the blog at badbeekeepingblog.com. Ron wrote his most recent book, The Mountain Mystery, for everyone who has looked at a mountain and wondered what miracles of nature set it upon the landscape. For more about Ron, including some cool pictures taken when he was a teenager, please check Ron's site: miksha.com.
View all posts by Ron Miksha →
This entry was posted in Culture, or lack thereof, Science, Strange, Odd Stuff and tagged bee foraging, Golden Fleece, Golden Goose, navigation, screwworm, Tom Seeley, waggle dance. Bookmark the permalink.

9 Responses to The Golden Bee Award