When I was much younger, my brother and I visited a world-renowned bee breeder who produced thousands of queens every spring. I don’t remember much about that trip to the north-Florida panhandle where every town had some elegant white clapboard homes shaded by mossy live oaks. The place was steamy and humid. Bee season was almost over for the year. I don’t remember the five-hour drive to see the beekeeper or the way he greeted us. But there is one thing that stood out on the visit. 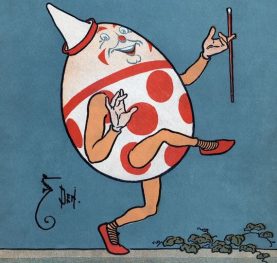 Even Humpty had his moments.

The north-Florida queen breeder reached for a basket that held a half-dozen caged queens, knocked over a smoker, and dropped the queens. The reason that this stood out for me is easy to explain. Queen rearing is a very fine craft, requires great dexterity, and insists upon smooth gentle motions. It’s a very precise job, demanding keen observation and great patience. You don’t expect a champion of the trade to be clumsy. But he was, at least at that one moment that we saw him.

As they say, the proof’s in the pudding. The beekeeper that we met was very successful. He made money. Gave jobs to a lot of people. His queens were excellent. It’s possible that he had never had a clumsy moment in his life until the day we encountered him. When we left, perhaps he went back to being Mr Elegant again. Although I remember something rather surprising about him, it is almost certain that he’d had too much coffee that morning. Or something. We did not see the real guy during that one moment, that one meeting.

It works both ways. Regardless how presentable a beekeeper may seem when he/she is polished and shiny for a beekeepers’ meeting, you know that there could be an awkward buffoon lurking behind a thin veneer of coolness. With bee meeting season upon us, I’ll try to keep in mind the sage cowboy advice about the big-hatted Texan. It should take more than a chance meeting and bottomless braggadocio – or, on the flip-side, an ungainly motion – to form an opinion about a new acquaintance. 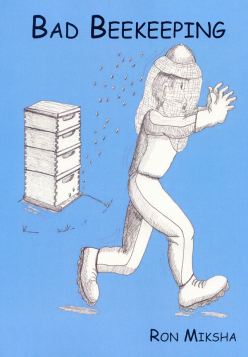 People who know me well might think I’m writing about myself when I write about a clumsy beekeeper. That would be true enough. When I wrote my book Bad Beekeeping, I listed some of my awkward moments, including queen bees that slipped through my fingers.

But the point to Bad Beekeeping is that we shouldn’t trust arrogant self-confidence. On the other hand, if I find myself underwhelmed by a great beekeeper, I stick around. I may accidentally learn something.

Ron Miksha is a bee ecologist working at the University of Calgary. He is also a geophysicist and does a bit of science writing and blogging. Ron has worked as a radio broadcaster, a beekeeper, and Earth scientist. (Ask him about seismic waves.) He's based in Calgary, Alberta, Canada.
View all posts by Ron Miksha →
This entry was posted in Beekeeping, Queens and tagged Bad Beekeeping, Florida, queen breeding. Bookmark the permalink.

5 Responses to The Clumsy Beekeeper