Bugs impact windshields from time to time. You’ve scraped off the gooey result. A lovely dégustation if there’s ever been one.  Placing a bee yard near a busy road makes you an accessory to the beeslaughter of millions. You are also losing honey money. Here’s what I figured:

This summer, my van clipped three bees while speeding past one fellow’s bee yard. I know that every two minutes or so another vehicle passed that bee yard at the same speed as my van.  That’s 30 vehicles per hour. If, like my van, they each kill three bees, then we’ve killed almost a hundred bees in an hour. That would be a thousand in the course of a long sunny summer day. During thirty days of peak honey flow, that amounts to 30,000 dead honey bees – over half the foraging population of a producing hive. The average crop at that apiary site is 200 pounds, so the beekeeper – over the course of a season – has lost at least 100 pounds of honey. Depending on your market, that’s between $125 and $800. It’s something to notice. Five kilometres down the road was another yard and another honey bee slaughter site.

I’m just making broad estimates. I don’t know for sure how many millions of bees (and other bugs) end up as road kill, but last summer some Ontario scientists did the real-deal survey. In a serious (?) scientific paper (Road mortality potentially responsible for billions of pollinating insect deaths annually) five (!) scientists did maths on windshield bugs and found that my estimate of millions was off by millions. It’s billions and billions. And here’s how we know.

Writing in The Journal of Insect Conservation, authors James H. Baxter-Gilbert, Julia L. Riley, Christopher J. H. Neufeld, Jacqueline D. Litzgus, and David Lesbarrères report that they selected a 2-kilometre (1.2-mile) stretch of rural highway that traversed Magnetawan First Nation as a road kill collection site. Over two summers (2012 and 2013), 117,000 insects were scraped from asphalt and along the highway’s edges. At 10:30 each morning, rain or shine, two or three scientists-in-training (Grad students?) began walking along the roadway, stuffing road kill into ziplock baggies. The assumption is that bugs hit by vehicles land on the road and neither stick to the windshield nor bounce off into the surrounding tamarac. Such assumptions are untrue. Nevertheless, the bagged bugs do represent dead animals, likely killed by vehicles.

The vast majority (94,000) were bibionid flies, pesky little creatures that occasionally ‘bloom’, or cyclically erupt into massive populations. One such bloom occurred during the study, in May 2013. Stand in a bibionidae bloom and your hair becomes tangled in gnatties and your nose and mouth inhale unwanted protein. Of the 117,000 trophies bagged during the 2012 and 2013 roadkill-research expeditions, over 90,000 insects were caught during the May 2013 bibionidae bloom. Take them out of the mix and we are down to just a few dozen insects per day. This is not exactly unbridled roadside carnage. 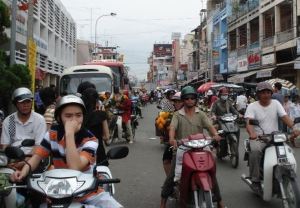 Before we relax our ecological guard, the authors warn “Recently there have been drastic increases in both the size and density of road networks worldwide, with a 35% increase in road surface area over the last decade alone.” I was surprised with that high number, but I followed the source to a 2013 International Energy Agency paper which you can see here.  Yes, our planet is being paved, but the overwhelming majority of new roads are in Asia where drivers ignore posted speeds (90 km/hr) and instead drive at a more leisurely 30 or 40 km/hr, as I discovered recently going by van from Hanoi to Ha Long. That 120-km trip took over four hours on a good road. The point, if drivers go slowly, as I saw in Vietnam, even snails have a chance to avoid impact. A bigger threat to ecology in such environments is paved habitat, not vehicular impact.

The recent Canadian study into insect roadkill found 117,000 dead bugs in two years along the short stretch of roadway – just 2 kilometres out of Canada’s 900,000 paved kilometres. This extrapolates to 53 billion dead insects in Canada, though the 2013 bibionidae eruption gave an anomalously high value. On the other hand, there are no apiaries along the studied roadside and there are few grasshoppers/locusts in the bagged loot, so the research results might instead be low. Either way, the survey by the five scientists doesn’t represent what we would see in western Canada where the ecology is significantly different.  My guess is that the actual number is between 10 and 100 billion.

The 2015 Sudbury Roadkill Research Paper involved just five authors and the three or four assistants who collected and sorted the bugs. It looked at one tiny stretch of Ontario highway spanning non-agricultural Precambrian granitic shield. Clearly, dozens of similar studies should be done – in the Palliser Triangle, Saskatchewan wheat fields, eastern coves, northern tundra, and western alpines. Physicists might be employed to model vehicle shapes and determine if some insect species are more likely to be found on the asphalt. Other physicists could determine the ricochet coefficient for individual species, defining the roadside collection zones more clearly. Photographers might remotely snap the passing windshields of cars and trucks before and after crossing the study zone. Forensic scientists could then compare before and after windshield images.  I think geographers, statisticians, and maybe even neurologists could find roles in future studies. This would tighten the quantification from an arm-wavey ‘billions and billions’ to something more believable –  perhaps 37,394,663,212 +/- 50, nineteen times out of twenty.

Worldwide, the number of insects caught up in vehicular insecticide could be over a trillion. It’s enough to make even the most insectophobic realize we have a serious problem. Unless, of course we use a sense of perspective and recognize that a trillion is just 0.00001% of the world’s ten quintillion insects. Then it makes roadside insect kill insignificantly meaningless and any such studies terribly unnecessary. But let’s ignore that detail and carry on, shall we?

After we have collected irrefutable data, we approach Congress/Parliament for mitigation funding. Auto makers may receive cash to redesign cars so they harmlessly flick bugs out of the way (air guns?) or employ braking mechanisms to limit top-end vehicular speeds to an insect-safe 40 km/hr. Maybe butterfly netting could envelope our freeways, saving insects as well as birds, children, and other small animals which may wander on the thoroughfares. Or possibly, insects could be genetically modified, replacing their carbon atoms with hardier silicon, making them rock-like and stronger than windshields. That would surely have interesting consequences.

Or perhaps the friends of insects could take a lesson from Australia, which has a potential solution to its koala roadkill problem – Daylight Savings Time. Most koalas are struck by autos during twilight, so simply resetting clocks and decreasing twilight traffic can save koalas.

Limiting traffic to only those hours when the fewest insects are flying would similarly decrease insect carnage. These insect accident mitigation suggestions of mine are just the start  – I’m sure that smarter people than me will come up with more brilliant solutions than these.

With political will and sufficient cash, there are so many places we could take the challenge of stopping the roadkill of insects. Or perhaps we can study other stuff such as the effect of paved landscape on insect habitat. Even more seriously, Singer-like, we may give deeper thought to our allocation of resources –  perhaps scholarly investigation and public money could improve access to clean drinking water, adequate health care, and safe food at the native Ojibwe lands where the Canadian insect roadkill study was conducted?  Just a thought.

Ron Miksha is a bee ecologist working at the University of Calgary. He is also a geophysicist and does a bit of science writing and blogging. Ron has worked as a radio broadcaster, a beekeeper, and Earth scientist. (Ask him about seismic waves.) He's based in Calgary, Alberta, Canada. Ron has written two books, dozens of magazine and journal articles, and complements his first book, Bad Beekeeping, with the blog at badbeekeepingblog.com. Ron wrote his most recent book, The Mountain Mystery, for everyone who has looked at a mountain and wondered what miracles of nature set it upon the landscape. For more about Ron, including some cool pictures taken when he was a teenager, please check Ron's site: miksha.com.
View all posts by Ron Miksha →
This entry was posted in Bee Yards, Ecology, Humour, Science, Strange, Odd Stuff and tagged Ontario, roadkill, Vietnam. Bookmark the permalink.

4 Responses to Ending the Senseless Roadside Carnage (of bugs)