Dead bee, in the middle of the ‘shield…

Bee collisions on an Alberta (Canada) highway. Can you spot all four?

A few days ago, I had a road trip that took me two hours from my home in Calgary. Flying low at 130 kph, I expected to whack a lot of bees on the forehead of my van, but I only clipped two on the way, then another two on the way home. Both highway accidents occurred at the same location on the 4-lane freeway. I don’t know why the bees were hit only at that one spot. (Hopefully, it wasn’t the same two bees each time.)

It was a bright beautiful day, the sort when bees store ten or twenty pounds of net-weight honey. Nectar plants were at their prime everywhere.  Since the only bee collision occurred about half-way between Calgary and Lethbridge, perhaps that was the only spot with hives close to the highway. The bees should have looked both ways before crossing.

I was reminded of Loudon Wainright III’s classic folk song about the dead skunk in the middle road (“…should have looked left and he should have looked right…”).  Here’s the video. Replace ‘skunk’ with ‘bee’ and you’ll do fine. The point in the song about pollution remains unchanged.

(*Queasy Alert and Reaction Trigger: Video contains scenes of dead skunks, a cat, and other animals in the middle of the road – none were intentionally killed in making this film.)

A few years ago, I wrote about bee/windshield interactions and what they cost the beekeeper. Since most of you missed that piece (from August 2013),  I’m repeating myself here:

Road kill. In this case, it’s bees. I was out of the city yesterday, cruising the Alberta back roads at 110. (The posted speed limit was 100, so maybe that was really my speed.) I passed a few bee yards tucked into meadows within small groves of trees. On one moderately busy paved road three honey bees spit up on my windshield. Big blobs of nectar were the imprint on the glass where those unfortunate bugs made contact with my van. I spent the rest of my trip calculating how much money this collision cost the beekeeper in lost honey. Not much, it turns out. But I wasn’t the only traveler out there.

How many bees does it take to make a dollar? These days, a dollar’s worth of honey is about half a pound. Well, those hapless bees that damaged my windshield were fat, but there certainly was not half a pound of nectar among the lot. And nectar cures into honey at a pretty high ratio. So we are talking partial pennies, of course. (Canada no longer uses pennies, so this becomes a mote point.) The math (and the guilt of ending three promising foraging careers) was making it hard for me to think about my driving, so I decided to look at this in a different way. Yesterday, about one car every two minutes passed that bee yard at the same speed as my van – or faster. (Alberta’s farmers drive quickly – their grandparents all raced horses at one time or other.) At a rate of two vehicles per minute, that’s 30 each hour. If, like my van, they each kill three bees, then we’ve killed almost a hundred bees. That would be a thousand in the course of each of our very long, very sunny summer days. Over a period of thirty days of peak honey flow, that amounts to 30,000 dead honey bees. This is just an estimate, but it represents something close to half the foraging population of a producing hive for the month. The average crop here is 200 pounds, so the beekeeper – over the course of his season – has lost about 100 pounds of honey, or 5 pounds from each of the 20 colonies in that apiary. One hundred pounds of honey, at today’s prices, is $200. That’s something to notice. And, five kilometres down the road was another yard and another honey bee slaughter site.

What’s the solution? Always a believer in the benevolence of a big cumbersome government, I could advocate for more highway signs and stricter enforcement. Why allow drivers to speed along at 110 when there are bees at play? We should have heavy fines for offenders. Or, perhaps we could have police checkpoints where kindly RCMP officers scrape windshields or otherwise count the road kill and drivers then pay a fee, especially if they’ve been killing without a license. To be effective, the fee would be much greater than the pittance of lost honey from the few bees clobbered – a prohibitive penalty, if you like. Then there is the libertarian’s perspective. The government stays out of this particular issue. The marketplace takes over. Honey prices soar because of the reduced crop. Or beekeepers, counting all those partial pennies lost, simply move their bees to safer spots.

There is some good news in this story. The squashed bees on my messy windshield indicate the Alberta honey flow (at least in our area) isn’t over yet. And with the forecast predicting warm sunny weather, maybe it will last into September.

I had another road trip, not as lengthy as the one reported at the start of the blog above. But this one had a lot more collateral damage. At least 30 bee/van incidents. Multiplied by millions of vehicles, it might be time for the Save the Bees-ers to ban summer driving.  Here’s a pic of part of my windshield when I got home: 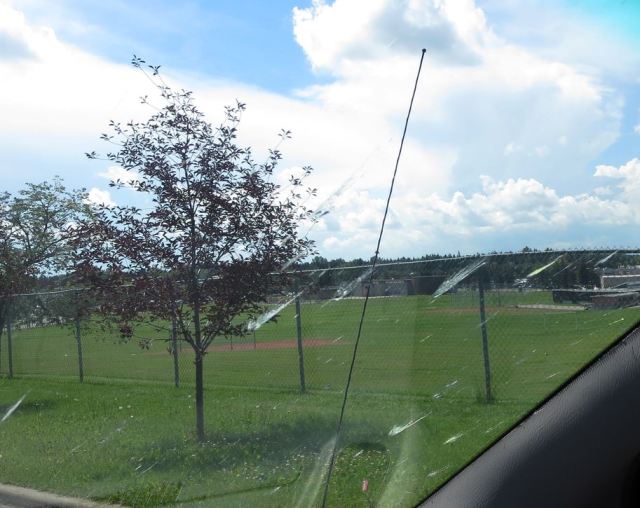 Ron Miksha is a bee ecologist working at the University of Calgary. He is also a geophysicist and does a bit of science writing and blogging. Ron has worked as a radio broadcaster, a beekeeper, and Earth scientist. (Ask him about seismic waves.) He's based in Calgary, Alberta, Canada.
View all posts by Ron Miksha →
This entry was posted in Bee Yards, Beekeeping, Culture, or lack thereof, Humour, Strange, Odd Stuff and tagged Alberta, dead bees, dead skunk, windshield bees. Bookmark the permalink.

2 Responses to Dead bee, in the middle of the ‘shield…