Picture this. A bee with her tiny face pressed against a window, spying on other bees so she can see where the treasure is hidden. Sounds ridiculous to me, but it turns out to be true.

In 2013, Canadian scientists presented a puzzle to four different bumble bee colonies. The bees had to fly to blue artificial flowers that had sweet syrup hidden beneath fake plastic petal-discs. Two colonies were given the task of finding the syrup without any training or help from the researchers. They failed miserably. But bees in two other colonies were helped in one of three different ways:

a) dead bumble bees were glued to the partially hidden syrup feeders;

b) successful bees were allowed to talk to recruits and explain where the syrup was hidden; or,

c) bees were allowed to watch their friends foraging. 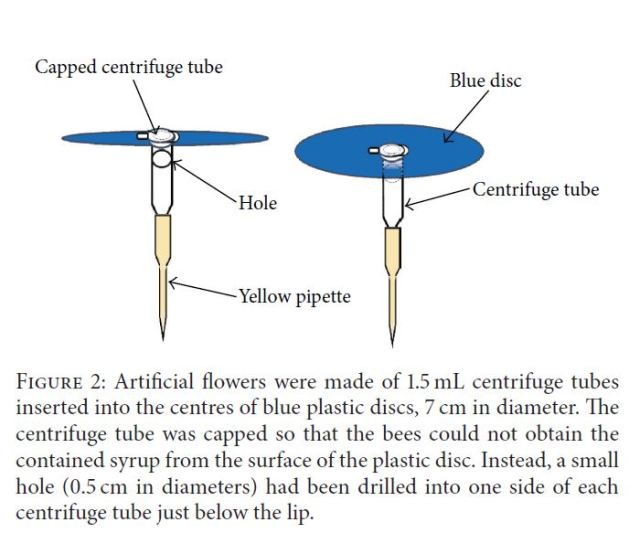 The University of Guelph researchers – Hamida Mirwan and Peter Kevan – are not sure how the bees communicated the foraging trick to their hive mates. They write, “The means of in-hive communication are not understood and warrant intense investigation.” Indeed it does. How on earth could one bumble bee tell others to “fly to the blue plastic flower, don’t be fooled by the big bright fake petal, but look under it, near the back, and you’ll find a hole you can stick your tongue into and Wow! you’ll be surprised by the sweetness of the extrafloral nectaries on those artificial flowers!”  That’s amazing communication.

But before we give all the smart bumble bees a hearty high-four, we have to wonder why the dead bumble bees glued to the flowers worked as a feeding cue. This points to seriously flawed bee-brain reasoning – it should be apparent to even the most inept bumble bee that the dead bees had found nectar, then died. Shouldn’t this be a warning to other bees? I think smart bumble bees would have said, “Poisoned. They’ve been poisoned by the artificial flowers.” They should have put two and two together and decided it was a trap, not a treat. But the experimenters used bumble bees. I don’t think honey bees would have been as foolish.

Finally, we have the test bees who were allowed to watch. No whispering, no communication, just peeking through the window while other bumble bees worked. I think that this is almost as amazing as the talking bees. (Almost, but not quite.) The bees that watched the foraging bees saw which colour flower to visit and where the syrup was hidden. Can you imagine the thought process involved?  “Look! There’s Gertrude. She’s only going after the blue flowers, but silly bee, she’s not landing on top the petals… oh, wait. I get it. The syrup is hidden below the petals. Clever.”

Some people accuse scientists of conducting pointless pure research, but I can see a great application here. Educational bee documentaries. Small mp4 players should be placed inside honey bee hives. A movie switches on at six in the morning. It’s just a little movie about bees working almonds. It loops continuously. The plot is like this: Bee approaches trees, gathers pollen, then the actor-bee is filmed flying to a different cultivar to gather more pollen, assuring cross-pollination. Maybe subliminal messages could be included – flashes of fat happy larvae being fed beebread, for example.  After ten minutes, the theatre shuts down, with a repeat show every hour until 4 pm.

For pollinator bees trucked in from out of state, the movies might play during the two-day drive – sort of like in-flight entertainment. Then when the poor bees are set out in the almond groves, they’ll feel like they are in a comfortable, familiar surrounding and they can get right to their job of working themselves to death.

Ron Miksha is a bee ecologist working at the University of Calgary. He is also a geophysicist and does a bit of science writing and blogging. Ron has worked as a radio broadcaster, a beekeeper, and Earth scientist. (Ask him about seismic waves.) He's based in Calgary, Alberta, Canada. Ron has written two books, dozens of magazine and journal articles, and complements his first book, Bad Beekeeping, with the blog at badbeekeepingblog.com. Ron wrote his most recent book, The Mountain Mystery, for everyone who has looked at a mountain and wondered what miracles of nature set it upon the landscape. For more about Ron, including some cool pictures taken when he was a teenager, please check Ron's site: miksha.com.
View all posts by Ron Miksha →
This entry was posted in Bee Biology, Science, Strange, Odd Stuff and tagged almond pollination, bee brains, bee foraging. Bookmark the permalink.

2 Responses to Bees That Watch Bees