Erik, a beekeeper/writer/blogger in northern Virginia keeps a nice online calendar showing flowering dates in his neighbourhood. It’s only a couple of years old so it just gives us a small window into recent changes that may be happening to the climate in his area. I hope he keeps the calendar going for years and years to come. But already, it shows surprising drama.

On Erik’s calendar, dandelions are blooming a month earlier each year for three years in a row. In 2015, dandelions opened on April 10th. To me, that seems like the norm that I remember, growing up in nearby Pennsylvania, decades ago. But in 2016, the lions were roaring in March. This year they began flowering February 25th.

When ten of the hottest years on record have occurred within the past twenty (according to NASA) and carbon dioxide levels are at their highest in millions of years, only an ostrich would continue to enjoy the cool earthly delight of a head in the sand. These climate changes trouble me. Although I have been a lifelong beekeeper and have run commercial honey farms over the past 40 years, my job as a geophysicist keeps me interested and informed about earth-systems.

“The world has been hot before; it’ll be hot again.” Have you heard that one? It’s sort of right up there with, “House fires happen; they’ll happen again.”  In the distant past, a build-up of CO2 was partly responsible for polar icecap melt which resulted in higher seas, heat, humidity, and dinosaurs. High levels of carbon dioxide trap the sun’s heat and the planet’s surface warms up. It’s elementary physics and not exactly rocket science. However, most scientists are amazed at the speed of the global meltdown. We really thought we could pass this problem along to our grandkids.

Rex Tillerson, now US Secretary of State, but formerly head of Exxon, has said that climate change is real and he directed Exxon to support the 2015 Paris Agreement on climate. Tillerson claimed that climate change was at least partly anthropogenic (human-activity driven). At his nomination hearings for his current job, he said that after 20 years as a scientist and engineer, he had concluded that “the risk of climate change does exist.” He also believed “action should be taken.”  In the past, he has indicated that stopping climate change isn’t likely and he advocated that engineers will need to find ways for us to survive the inevitable.

Farmers and beekeepers have to prepare for Tillerson’s inevitable climate change. Beekeepers are actually in a more envious state than other farmers because hives are mobile. Here are some suggestions to survive probably climate disruptions. I’m sure that you can think of more.

Pay attention. You might be a climate skeptic. But meteorologists are becoming better at predicting the next  month’s weather. If they predict drought or an unusually wet winter, weigh the information with an open mind. They may be right, so take advantage of the warnings.

Look for more bee yards. If you are on the prairies, have some back-up yards at higher elevations or northerly places. Be prepared to move bees. Make arrangements with beekeepers in places that you might invade so they can help and profit from your arrival.

Own more supers. There may be years when your hotter bee locations are also wetter and huge bumper crops result. Expect wider fluctuations in crop size. No honey one year; manna from the gods the next. That’s likely to be the rule.

Pollinate. As farmers also suffer swings in rainfall and heat, they will depend more and more on bees for pollination. You may lose honey crops to drought but pollination contracts might keep you in the bee business.

Mind your pennies. Some people buy a Cadillac after a bumper crop. Those folks become ex-beekeepers. Saving money for famine years will be more important than ever.

Shut off the lights. Trivia waste of energy is part of the problem. On the other hand, beekeepers can be proud that their business is one of the few that (calorie-for-calorie) generates more food energy than it consumes in production of the food.

I’ll avoid the politics of climate change in today’s blog post. I understand that some libertarians see climate change warnings as a plot to undermine their freedom to pollute without consequence. But accepting science and making preparations to protect your business and your family are just exercises of common sense, not exercises in leftist manifestos.

I help teach a beginners’ beekeeping course here in Calgary. Two years ago, going through the sequence of nectar sources and their flowering dates, I told the class, “Dandelions reach peak bloom May 25th. You can set your calendar to it.” Then came the spring of 2016 with dandelions peaking in mid-April. Made quite a fool of me. In 30 years of Calgary beekeeping, it was the first peak bloom before May 15th. I think that I’ll be fooled rather regularly from now on.

Meanwhile, another look at the calendar that started today’s blog post. Erik has listed a favourite spring flower, the daffodil. Daffodils do little to help bees but they make a beekeeper’s life a bit brighter. Dabs of bright yellow on an awakening drabscape are always welcome. In 2015 in northern Virginia, daffodils were noticed in flower in April. In 2016, it was March. 2017, February. If that retro-trend continues in 2018, they should be out in January. In 2019, it’ll be daffodils in December. (No, I don’t really think so. But I’ve been fooled before.) 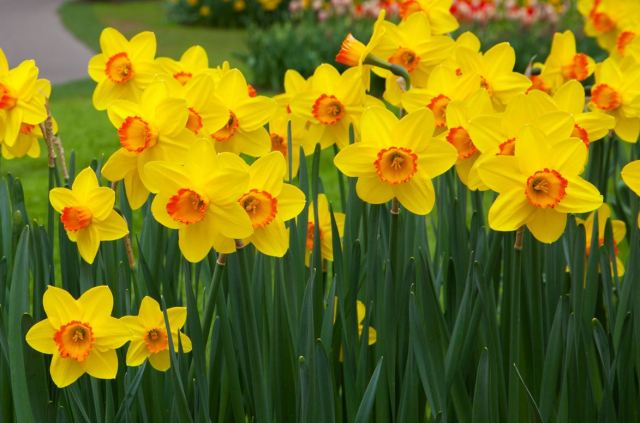 Ron Miksha is a bee ecologist working at the University of Calgary. He is also a geophysicist and does a bit of science writing and blogging. Ron has worked as a radio broadcaster, a beekeeper, and Earth scientist. (Ask him about seismic waves.) He's based in Calgary, Alberta, Canada. Ron has written two books, dozens of magazine and journal articles, and complements his first book, Bad Beekeeping, with the blog at badbeekeepingblog.com. Ron wrote his most recent book, The Mountain Mystery, for everyone who has looked at a mountain and wondered what miracles of nature set it upon the landscape. For more about Ron, including some cool pictures taken when he was a teenager, please check Ron's site: miksha.com.
View all posts by Ron Miksha →
This entry was posted in Beekeeping, Climate, Honey Plants and tagged Calgary, cherry, climate change, daffodils, dandelions. Bookmark the permalink.

7 Responses to Daffodils in December?