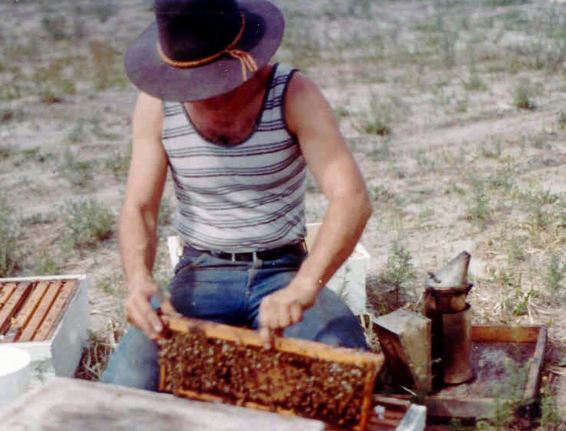 If you’re a beekeeper, you probably already know all about nucs, the little hives from which big things are supposed to grow. If you’ve made nucs for fun or profit, then you have your own system – maybe two frames of brood, two of honey, and one for growth. Maybe you keep the nuc in the mother yard and take advantage of drift; maybe you move miles away to avoid drift. Maybe you are nuking hives for your apiary’s expansion, so you add a laying, caged queen. Or maybe you are making nucs to raise queens – you make weaker units than the ones designed for increase, and you probably insert a queen cell of your own creation.

In a minute, I’ll describe what we put into the new nuc which came to my home in Calgary a couple of days ago. But first, some etymology that entomology fans should know. The word ‘nuc’, pronounced ‘nuke’, is short for nucleus. A nucleus is the center, or core, of something bigger. Cousin words are nuclear (as in ‘nuclear family’) and nucleic (as in DNA, or deoxyribonucleic acid) – I’d argue that genetics and a core family are good things to think about when you make nucs. The nuc should hold the start of a great hive – a bee family with lineage appropriate for your area. For splitting hives, I sometimes use the action word ‘nuking’ which conjures widespread destruction – Armageddon for the hive – though it need not be quite so horrific. 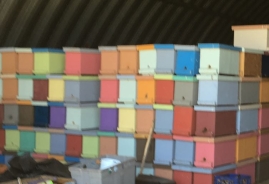 The nuc which I brought home is not supposed to become a powerhouse. It was made with just two frames of brood, no queen, but plenty of honey and enough bees to keep the brood warm. (It still dips below +10C/50F here each morning.)  The box itself was designed by my son-in-law. He built a bunch of rugged 6-frame nuc boxes and painted them a rainbow of colours. From the blue, pink, yellow, white, red, and various pastel tones, I asked for something that would blend in with the shrubs and grass in my back yard. I certainly didn’t want a white hive. No sense calling attention to the box of bees in my back yard – camouflage was my choice. 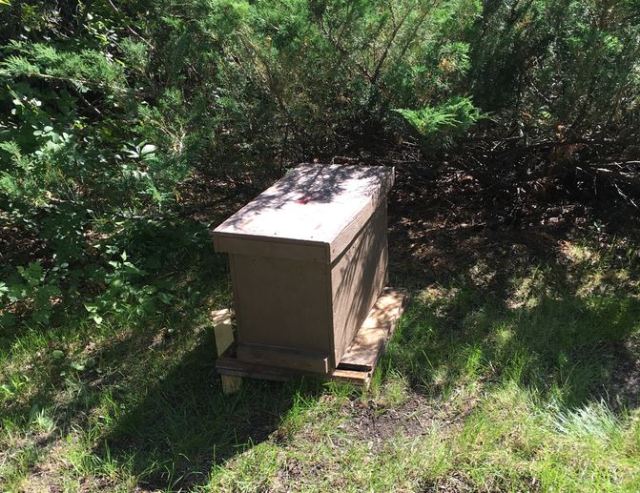 The nuc was pulled from a healthy, strong, and (most significantly), docile hive. We created it late in the afternoon so I could drive home and unload it as evening approached. How does one drive for over an hour with a hive of bees in a van? The short answer is ‘carefully’ but tomorrow I’ll post the long answer. You may be surprised with one of the tricks that I always use when I move a hive or two in a car or van. I haven’t seen the strategy described anywhere else, so maybe it’s a bad idea. 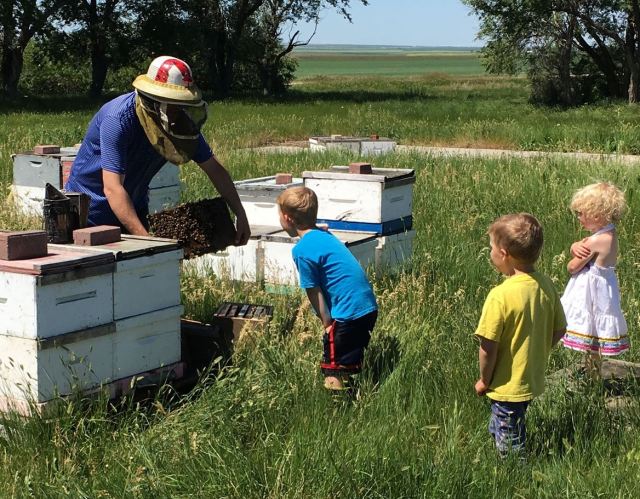 My son-in-law nuking a hive for me while my grandson spots for the queen.

Ron Miksha is a bee ecologist working at the University of Calgary. He is also a geophysicist and does a bit of science writing and blogging. Ron has worked as a radio broadcaster, a beekeeper, and Earth scientist. (Ask him about seismic waves.) He's based in Calgary, Alberta, Canada.
View all posts by Ron Miksha →
This entry was posted in Beekeeping, Hives and Combs and tagged Alberta, Calgary, nuc, splitting hives. Bookmark the permalink.

6 Responses to Nuking the Bees