Canada: More Buzzing than Ever at 150 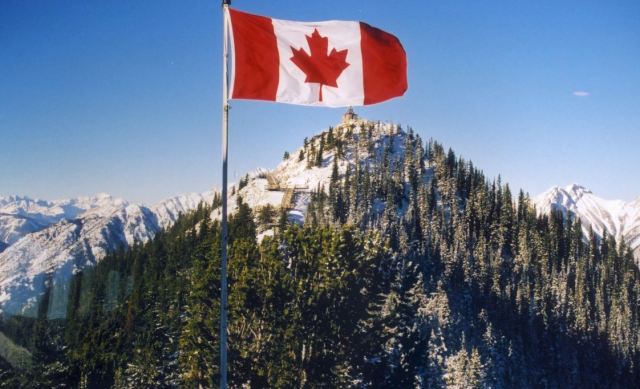 Today is Canada’s 150 birthday,  so “it’s Canada Day, up Canada way”, as Stompin’ Tom Connors used to say. If you don’t know Stompin’ Tom, here’s your chance to rectify a serious deficiency. Connors was a great Canadian country/folk singer and song writer.  The day he died, back in 2013, my younger kids’ school day was interrupted with the principal announcing that old Stompin’ Tom had left the stage. Then the PA system let loose with Stompin’ Tom’s Hockey Song. The folk singer, who got his Stompin’ title from the way his cowboy boot kept time with his guitar, is essential Canadiana. An indelible cultural fixture. Even if you are not lucky enough to be Canadian (you can fix that), you might appreciate Connors’ Canada Day Song. So here it is:

If you’re not Canadian, but you keep bees, you might be persuaded to experience some of our famous fabulous honey crops. How would you like to make 200 pounds of water-white, smooth-as-silk honey from each of your hives every year?

If that sounds like something you’d enjoy, come on in.  (That’s a slight exaggeration. Saskatchewan, where I landed, has a 30-year average of only 186 pounds per hive.) When I immigrated to Canada in the 1970s, beekeeping as an occupation was given more points in the immigration scheme than engineering. My application wasn’t exactly rubber-stamped, but being a beekeeper helped. A lot. My interview with the Canadian consulate was pretty much over when he began by saying, “We need beekeepers.”  Is that true today? I’m not sure. But good beekeepers are always welcome almost everywhere.

What makes a good honey country? Why is Canada so good for bees? It’s not hard to explain. Perfect honey plants (alfalfa and sweet clover). extremely long days (sun’s up for 18 hours today) and great weather (sunny, warm summers) are the simple answers. Western Canada has a short and sweet honey season. But it’s intensity that counts, not a long, slow, lingering honey flow. We’ve got intensity here.

Bees arrived in Canada about 400 years ago and spread west with homesteaders. Along with cattle, sheep, horses, and hogs, bees are imported livestock. Until Europeans planted sweet clover and alfalfa as hay crops on the western prairies, honey production was small. The native wildflowers aren’t honey bee plants. Saskatchewan, for example, went from a 20-pound per hive average when bees worked only wildflowers in 1890 to nearly 200 pounds today, simply with the spread of imported bee forage.

Colony numbers across Canada grew rather slowly at first,  but then almost tripled in the past hundred years. In 1924, when Stats Canada began tracking honey production, there were just 280,000 colonies. They made 16.8 million pounds – 60 pounds per hive. At the time, Ontario led the nation in honey crops. In the early 1940s, there was a big boost in beekeeping because of sugar rationing saw during the Second World War, though many beekeepers later left for factory jobs as soon as the war ended.

By 1960, Canada’s sweet spot shifted west with the prairie provinces making twice as much honey as Ontario. Soon, new crops (such as canola) and new farmland (especially in the northern “bush” in western Canada) saw a big revival in beekeepers and honey production. Things were really blooming until the late 1980s when the federal government accidentally destroyed beekeeping in the western provinces with embargoes designed to help Ontario and Quebec beekeepers. Canada’s hive counts fell by over 200 thousand, as you can see in the graph below. However, thirty years later, as Canada turns 150, the country’s bee stocks have recovered and we now have more colonies than ever.  Also, with enormous hobbyist interest, more and more people have begun appreciating bees and living with them. 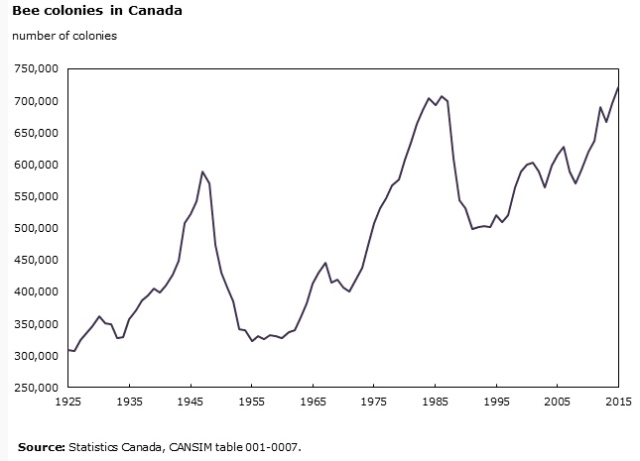 Canadian beekeeping history, just like the country’s, is largely a story of growth. It includes lots of characters with fascinating stories. Someday I’ll write a more complete history. For now, let’s celebrate 150 years as a beekeeping nation with a great future.

Ron Miksha is a bee ecologist working at the University of Calgary. He is also a geophysicist and does a bit of science writing and blogging. Ron has worked as a radio broadcaster, a beekeeper, and Earth scientist. (Ask him about seismic waves.) He's based in Calgary, Alberta, Canada. Ron has written two books, dozens of magazine and journal articles, and complements his first book, Bad Beekeeping, with the blog at badbeekeepingblog.com. Ron wrote his most recent book, The Mountain Mystery, for everyone who has looked at a mountain and wondered what miracles of nature set it upon the landscape. For more about Ron, including some cool pictures taken when he was a teenager, please check Ron's site: miksha.com.
View all posts by Ron Miksha →
This entry was posted in Culture, or lack thereof, History, Honey Plants and tagged Canada, Saskatchewan, Stompin Tom. Bookmark the permalink.

1 Response to Canada: More Buzzing than Ever at 150