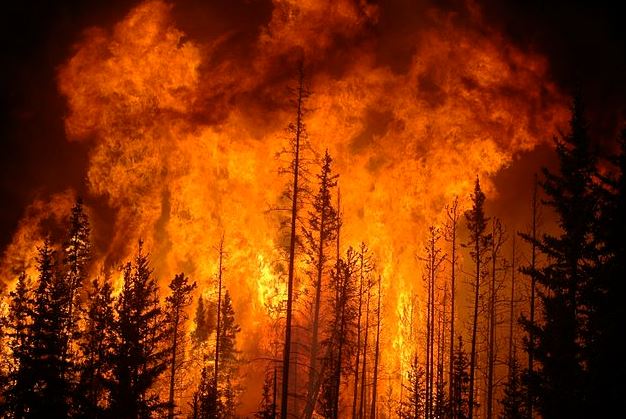 Last week, fires in western Canada forced 47,000 people from their mountain homes. Over a hundred houses were destroyed. Livestock, wildlife, even bees went up in flame. Millions of stately pines and firs are now little more than spent matches on the landscape. It’s horribly destructive, but like everything, forest fires are complicated.

If you’ve lost property and had to scramble ahead of flames, then you have no sympathy for the idea of forest renewal. But forest fires are part of the natural cycle that burns old growth and allows new. For thousands of years, lightning on a hot dry summer evening was the spark that led to the destruction of huge swaths of forest. Fires kill pests and tree bugs, leading to a fresh environment for shrubs, small trees, and herbaceous colonizers. Fireweed is among the new-growth sprouts. Here in Canada, it’s sometimes called willowherb, but most of us like to call it fireweed, a name that conjures  rebirth amid destruction.

We expect to see fireweed as a wild weed that grows in remote forests after fires have scorched the ground and blackened the dormant fireweed seeds. But there is a grand fireweed blooming beside our deck in the backyard.  Ten years ago, a kind breeze blew its seed into our lives. It took root and has been a lovely addition to our eclectic floral menagerie.

It has been a century since any fires swept through our back yard, but year after year,  our single sprig of fireweed shoots up.  It is a myth (perpertrated by beekeepers) that fireweed seeds need fire to ‘burn off their tough seed pod’ – that’s what my father told me and that’s what I tell my kids, even though I know it’s not true. Instead, fireweed is a ‘pioneer species’ that needs sunlight and wide-open meadows to get established.  After a fire, the plant can conquer huge sections.  Beekeepers sometimes haul their bugs into those fresh ranges to gather tonnes of water-white nectar.

Here in my city backyard, our friendly fireweed started to bloom a couple of weeks ago. It’s covered in bees. Bumblebees, not honey bees.  In fact, I have never seen a single honey bee on our backyard fireweed, not this year nor any previous year.  This summer, the absence of honey bees on this fireweed specimen is especially odd since I recently placed a small hive just a few metres away. 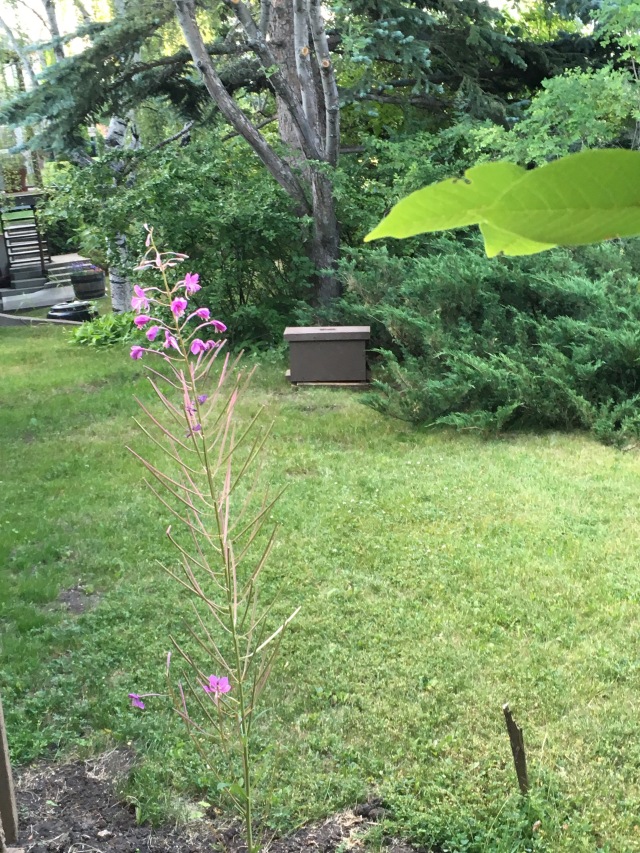 Why do honey bees shun my fireweed while a variety of native bees enjoy its blossoms? There are several reasons.  For one thing, honey bees are more likely to forage as a mob. They communicate discoveries of huge fields (near us, it’s sweet clover and alfalfa). A scout bee would be seriously ridiculed if she were to announce the discovery of a solitary sprig.  If there were thousands of fireweed plants, I’m sure that millions of bees would be having a party in our yard.  But one plant? Why bother.

I also suspect that the workers in my nuc, which you see in the picture above, are better adapted to imported forage such as alfalfa and sweet clover while indigenous bumblebees find this indigenous variety of fireweed appealing.  Lastly, honey bees fly kilometres while gathering nectar so they aren’t as partial to their immediate surroundings. Most other bees only forage near their nests so they are stuck with lonely bouquets.  These are just guesses. It would be interesting to follow up with a project to be more certain about the reasons that I’ve never seen honey bees on this honey plant, but have watched dozens of other bees work its blossoms.

Ron Miksha is a bee ecologist working at the University of Calgary. He is also a geophysicist and does a bit of science writing and blogging. Ron has worked as a radio broadcaster, a beekeeper, and Earth scientist. (Ask him about seismic waves.) He's based in Calgary, Alberta, Canada. Ron has written two books, dozens of magazine and journal articles, and complements his first book, Bad Beekeeping, with the blog at badbeekeepingblog.com. Ron wrote his most recent book, The Mountain Mystery, for everyone who has looked at a mountain and wondered what miracles of nature set it upon the landscape. For more about Ron, including some cool pictures taken when he was a teenager, please check Ron's site: miksha.com.
View all posts by Ron Miksha →
This entry was posted in Honey Plants and tagged Alberta, British Columbia, fireweed, forest fires. Bookmark the permalink.