If you are interested in ecology (and especially pollination), there’s a great piece you’ll want to read on Jeff Ollerton’s website. Dr Ollerton (University of Northampton) has just released a comprehensive paper on pollinator diversity in Annual Review of Ecology, Evolution and Systematics. If you go to Jeff’s blog, you can follow his link and get a copy of his paper. I enjoyed a couple of hours of deep introspection reading his article this morning. There’s a lot to think about.

I’m not going to paraphrase Ollerton’s piece – it’s written in a clean, accessible style. You’ll have no trouble reading Pollinator Diversity and Why It’s Important. I won’t repeat his work here, but I will give you a little summary and a few extractions that are particularly interesting. (To me, anyway.)

Here’s the bottom line.  For the health of our ecology – including agricultural endeavours – diversity of pollinator species is essential. Diversity of species means a wide variety of kinds of creatures. We tend to go for quantity as a solution for our problems, but throwing more honey bees into a pollination problem is not necessarily the best fix. The loss of pollinator varieties frazzles the strands of the threads holding flowers, fruits, and foragers together in the web of life. Many – perhaps most – of these pollinators are largely unseen, unstudied, and virtually unknown. For example, there are ten times as many species of moths that work as pollinators. But they work at night. Most of us have never watched a moth pollinate a flower.

We (beekeepers) usually figure that if an anonymous pollinator or two disappears, honey bees can step in and fill the void. But here are two things to think about:

1) many pollinators are specialists which effectively pollinate flowers which honey bees usually ignore (or physically can’t work); and, 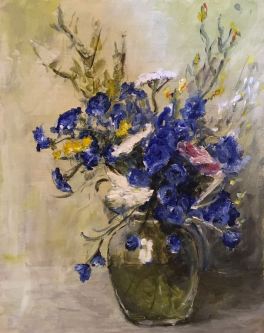 What happens when non-mellifera pollinators disappear? Here’s a wee example to consider. Let’s say that a certain type of flower (the glorious WannaBeeFlower, for example) is well-adapted to pollination by one of those 20,000-or-so odd bee species that populate our world. That WannaBeeFlower is sometimes also visited by honey bees who just grab a little nectar and run along to more enticing clovers. But because of those other bees, the WannaBeeFlower gets pollinated and blooms nicely season after season. Then one year, a clover parasite wipes out the clover. Your honey bees might starve, but they turn to the WannaBeeFlower. If that flower’s main pollinator goes extinct, the flower might also disappear, leaving your bees hungry on the bad year. Multiple this by a thousand similar flowers and their main pollinators and you can see the problem.  This is a selfish and narrow-minded reason to preserve diverse pollinators, but it gets our attention.

Of course there is more. Although honey bee keepers perform herculean tasks to keep honey bees flourishing, it’s becoming more and more expensive and frustrating. The same pollution and pesticides that are killing the “lesser” bees also affect honey bees. Conservation measures that help all of the pollinators will help your honey bees, too.

Those are only a couple of reasons that biodiversity is important. If we remind ourselves of the vast interconnected ecology of living things, we might disabuse ourselves of our narcissistic concern for our own hives.

I’m going to step off my palmolive box for a moment. If you want the facts presented without editorial comment, read Ollerton’s piece. It’s important. But before you go away, here are a few gleanings from his biodiversity paper that you can carry with you:

Dr Ollerton also tells us that there “is also much that we do not understand about the potential effects of pollinators that have been introduced to parts of the world in which they are not native.” Honey bees (which are not native to the Americas, Oceania, and much of Asia) may impact native species of bees. Their deleterious effects seem limited,  ranging from insignificant to potentially disruptive, depending on the biodiversity of the environment and the density of the managed honey bee colonies. If just a few non-native honey bee colonies are kept in areas with a variety of flowering plants, they probably are not displacing other pollinators. But we don’t really know for sure – this aspect of ecology hasn’t been thoroughly studied.

It’s possible that people who keep bees are doing more ecological good than harm. Here’s one reason. If you care about your bees, you will be more eager to support green spaces in your community and will be more likely to complain to city hall when the spray planes leave their hangars. Having more beekeepers means having more voices for initiatives that will help all the pollinators. In balance, keepers of honey bees are likely doing more to preserve wild pollinator habitat than they are to reduce foraging opportunities for other pollinators.

Ron Miksha is a bee ecologist working at the University of Calgary. He is also a geophysicist and does a bit of science writing and blogging. Ron has worked as a radio broadcaster, a beekeeper, and Earth scientist. (Ask him about seismic waves.) He's based in Calgary, Alberta, Canada. Ron has written two books, dozens of magazine and journal articles, and complements his first book, Bad Beekeeping, with the blog at badbeekeepingblog.com. Ron wrote his most recent book, The Mountain Mystery, for everyone who has looked at a mountain and wondered what miracles of nature set it upon the landscape. For more about Ron, including some cool pictures taken when he was a teenager, please check Ron's site: miksha.com.
View all posts by Ron Miksha →
This entry was posted in Bee Biology, Ecology, Pollination, Save the Bees and tagged Jeff Ollerton, pollinators. Bookmark the permalink.